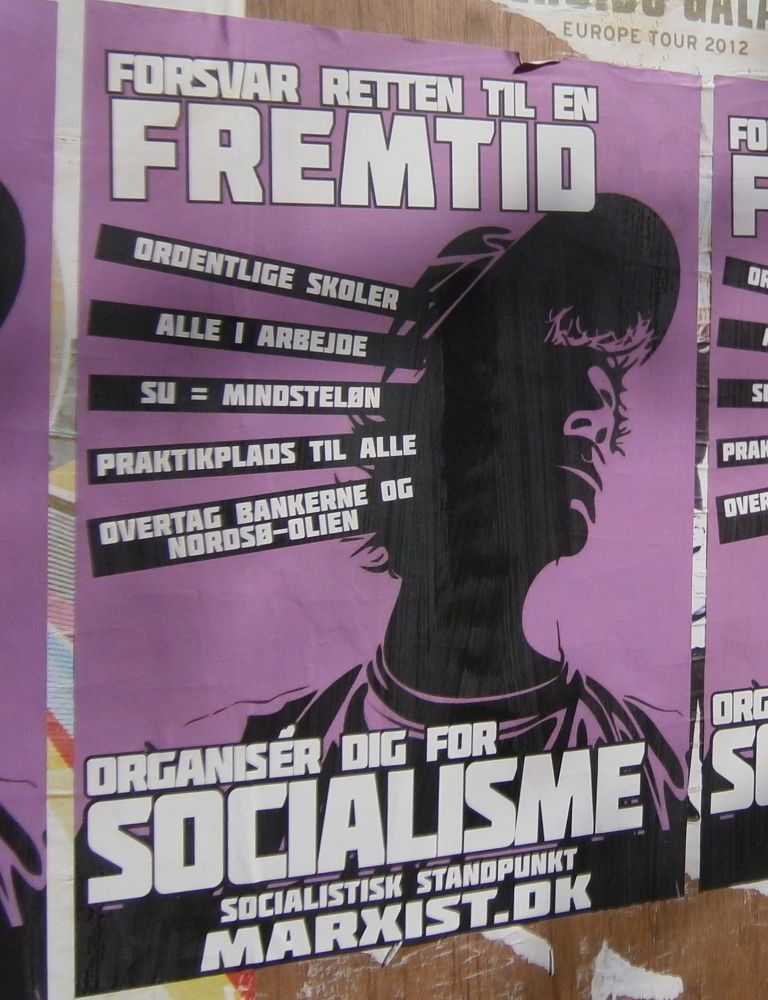 While we witness sharp shifts to the left in countries like Greece and France, as we see militant struggles developing in Portugal and Spain and other countries across Europe, this year’s May Day celebrations in Denmark revealed that there too opposition to austerity is growing among the workers and youth, as this report from the comrades of Socialistisk Standpunkt in Denmark clearly demonstrates.

For the comrades of Socialistisk Standpunkt, the supporters of the IMT in Denmark, this year’s May Day in the Fælledparken (Copenhagen) was very different, mainly because we have a Social Democratic government, but also because we were not allowed to set up an official stall this year. The local TUC [LO-Storkøbenhavns] doubled the price of a stall and banned the selling of political material from the stalls. We have tried to get them to change their decision but have had no success.

That is why we also acted differently than in previous years. For us, this year’s May Day started several days earlier with the launching of a youth campaign - “Defend the right to a future”  - which emphasizes the rising youth unemployment and the still worsening future perspectives for the youth in Denmark. The present youth are the first generation who can expect lower standards of living than their parents’ generation. Sympathizers of the newspaper therefore went out and stuck up several hundred posters around and in the Fælledparken on the night of April 30. The poster was also the front cover of the May edition of our paper, and as it turned out, it captured many young people’s attention, young people who, because of the many cutbacks, are looking for answers as to how they can improve their conditions.

Selling the Marxist journal Socialistisk StandpunktThe sun shone in a clear sky as around 50,000 people gathered in the Fælledparken. In spite of the militant mood at this year’s May Day celebration in the Fælledparken what was clear was a complete lack of enthusiasm towards the leaders of the Danish labour movement and, in particular, the coalition parties; the Socialist People’s Party and the Social Democratic Party. This lack of enthusiasm was indicated by the lack of applause for many of the speakers on the main stage in the park. Helle Thorning, the Prime Minister, Villy Søvndal, the Chairman of the Socialist People’s Party and Bente Sorgenfrey of the FTF (Federation of Professionals in Denmark)told the workers and students they should prepare for further cuts.

During the last couple of years many workers, apprentices and students have realized through bitter experience that their conditions and interests are not the main focus of the leaders of the workers’ movement and the workers’ parties, as they have been the victims of rising pressure at work and falling real wages and have experienced mass layoffs and massive cuts in education. This lack of enthusiasm has been confirmed by the latest polls that indicate that the Socialist People’s Party and the Social Democrats have lost respectively 1.5 and 4 percentage points since the last election.

In spite of all this, the political spokesperson of the Red-Green Alliance (The main left organisation in the Danish parliament), Johanne Schmidt Nielsen, received huge support from the people present by focusing on the rising unemployment and the worsening conditions for students and workers.

“While you are told to tighten your belts the richest part of the population has become even richer. The banks are again making billions of profit. And those bank directors who have bankrupted the banks are still being offered millions in bonuses. We now have the negotiations between the employers, unions and the State coming. The message of the coalition parties is that working hours have to be longer. Again it is you who have to pay the bill. This is unfair.”

Johanne Schmidt Nielsen aimed sharp comments at the coalition government calling for more job opportunities and that the bill for the economic crisis should be paid by those responsible for it, the heads of the financial world. This radical rhetoric by the spokesperson was reflected by the majority of the participants in this annual gathering, who showed their silent disapproval towards the other speakers. This widespread discontent towards the continuing policies of bourgeois economics indicates that people are losing faith in the coalition government and that the desire to change society for the better is growing below the surface. Dissatisfaction with the current government is also confirmed in the Red-Green Alliance's growing support in the opinion polls.

However, despite the major discontent expressed by the political spokesperson of the Red-Green Alliance, the speech itself did not offer any concrete solutions as to how to deal with the cuts and the worsening conditions of the working class. It is one thing to speak against the bourgeois policies of the Social Democrats and the Socialist People’s Party, but the lack of action is duly noted. It is worth noticing that in spite of their sharp rhetoric, the Red-Green Alliance supported the bombing of Libya and later voted in favour of the new budget containing cuts in social spending.

The fact that large sections of the working class and the youth no longer feeling represented by the existing workers’ parties highlights the need for a leadership capable of coming up with concrete answers to the crisis of capitalism and indicating a clear way forward. That explains why the front page of our paper was well received. It called for the youth and the working class to unite in the struggle for better conditions as well as offering concrete answers with which many could identify. This was confirmed by the fact that we sold far more papers than last year, more than 400.

The current coalition government has reiterated that they intend to continue with their present boss friendly policy. But the patience of the Danish youth and working class has its limits. As the mood at this year’s May Day clearly indicated, discontent among school students and workers, in the ranks of the trade unions and the workers’ parties is rising.

We, in Socialistisk Standpunkt, are not prepared to sit idly by while the conditions of the youth and the workers are worsening, as this year’s May Day intervention cleanly highlighted. We encourage the youth and workers to get organized in the struggle for socialism and for an equal and just society based upon the needs of the people and not on those of the minority that is greedy for profit!