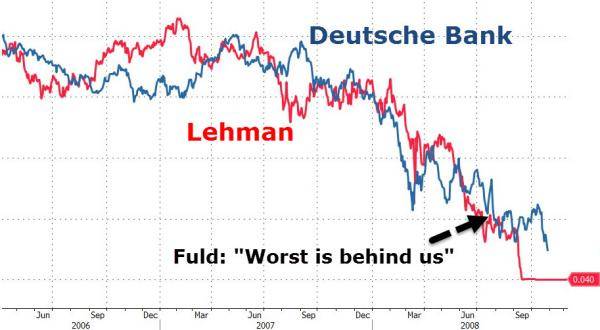 The spectre of Lehman Brothers is haunting Europe.

On Monday (26 September) the price of shares in Deutsche bank, Germany’s largest lender, slumped to its lowest level since 1983. Following on the heels of the ongoing Italian banking crisis, the Brexit shock and the Chinese stock market crash, a slump of this magnitude in the shares of one of Europe’s biggest banks has dire implications, not only for the eurozone but for the world economy as a whole. The current panic surrounding Deutsche Bank was sparked by the announcement, published in Germany’s Focus magazine, that Angela Merkel had ruled out the possibility of intervening in the bank’s ongoing dispute with the United States’ Department of Justice (DoJ), which recently threatened the bank with a $14bn fine for the misselling of mortgage bonds in the run-up to the subprime mortgage crisis in 2008.

To see a German bank facing potential ruin as a result of the orgy of irresponsible lending which preceded the crisis is doubly ironic. When the crisis first hit it was decried as an “anglo-saxon disease” by continental commentators. Germany in particular was seen as immune on account of its national distaste for the dark arts of high finance, preferring instead the more honest trades of industry and engineering. Then, when chauvinist delusion alone failed to prevent the contagion spreading to Europe in 2010, the giant holes which appeared on the balance sheets of German banks were filled at the expense of ‘debtor states’ such as Greece, which has since been effectively forced into liquidation in the form of asset sales and deep austerity cuts. Now, Germany faces its own “Lehman moment”. Perhaps the irony was not lost on the DoJ when it announced the fine earlier this month.

But there is much more to this than just irony: The fact that this announcement could cause such a drastic collapse of the bank’s share price underlines a chronic lack of confidence not only in Deutsche Bank, but in the prospects for the German economy. In a similar fashion to the Italian banking crisis which broke out over the Summer, the travails of Germany’s banks are symptomatic of a much deeper crisis - and not just in Germany.

Germany is Europe’s largest exporter and produces roughly a fifth of the EU’s total GDP. It is no exaggeration to describe it as the beating heart of the European economy and any palpitations emanating from Frankfurt are bound to be felt in the capitals and boardrooms of every European nation. Already, other European banks have suffered falls in their share value this week and the FTSE 100 suffered its largest fall since the EU referendum. A German collapse, occurring in the midst of economic and political turmoil on the continent, could develop into a full-blown cardiac arrest for European capitalism, not to mention the tottering world economy. 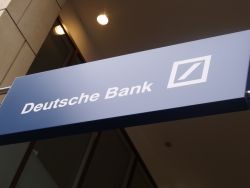 Photo: Elliott Brown/FlickrIn the past, Deutsche Bank, described as one of the “big beasts” of global finance, could have faced a fine of this size without a worry as to where it would find the cash. However, this is a fundamentally different period to the glory days of the pre-2008 boom. Deutsche Bank was already on a slippery slope before its most recent slump. It has seen its share price fall by 55% since the beginning of 2016 and was identified as “the most important net contributor to systemic risks” by the IMF as early as June. The rot had evidently set in long before the DoJ announced its $14bn fine.

The root of Deutsche Bank’s woes can be found in the extremely low level of profitability in the German banking sector. German banks have the third worst returns in the EU, with only Greece and Portugal offering worse investments. One cause of this problem is the fragmentation of the sector which, like its Italian counterpart, has a proliferation of smaller local banks competing with one another, driving up costs and thereby reducing profitability - a serious disadvantage in this era of monopoly finance. Mario Draghi, the President of the European Central Bank, has blamed this “overcapacity” in the banking sector for the lack of profitability.

German politicians on the other hand are pointing the finger at Draghi himself, claiming in a special session of the Bundestag yesterday (28 September) that their banks are straining under the pressure of negative interest rates, which the ECB has held in place since 2014. Initially intended as a temporary measure to avert the looming threat of deflation across Europe, the ECB’s dual policy of negative interest rates, coupled with an enormous “asset-purchasing program” of over €1trn, has become a something of a permanent policy, reflecting the chronic and insoluble lack of productive investment in the European economy, not to mention the rest of the world.

But this only tells part of the story. German banks have also been hit by the immense slowdown in world trade, which has been stagnant since the beginning of 2015. The effect of the slowdown on Germany, which relies on exports for almost half of its GDP, is comparable to asphyxiation: As German exporters and shipping firms enter into difficulties on account of the lack of demand, loan repayments have to be missed and, eventually, bad debts must be written off, causing great harm to lenders’ slender profit margins. Commerzbank, Germany’s second-largest investment bank, has already had to write off a number of loans made to struggling shipping firms. A similar crisis can be seen in Italian banking, which is saddled with over €360bn “bad” or “non-performing” loans.

Banks may be able to pursue all manner of schemes to grab a quick buck, as the string of fines on Deutsche Bank’s rap-sheet demonstrate (Libor-rigging and breaching the embargo on Russian assets are just two examples), but ultimately the health of the finance sector is linked to the health of the real economy and vice versa. In many respects, the crisis of Deutsche Bank is a microcosm of the the crisis of capitalism all over the world - a crisis which presents an insoluble dilemma for all of capital’s political representatives.

The German government’s repeated rejection of any plan to bail out Deutsche Bank (in public at least) may seem puzzling - perhaps a steadfast commitment to do “whatever it takes” to stabilise such a huge bank would have calmed investors’ nerves and thereby averted the panic over the bank’s solvency. However, Merkel’s seeming intransigence is much more understandable when you take into account the political and international ramifications of a bailout.

To use billions of euros of taxpayers’ money to bailout a bank which has collapsed due its own irresponsible misselling of mortgage investments would be political kryptonite for any government. For a government such as Merkel’s, which has preached to world about fiscal responsibility and discipline since 2008, it would be especially devastating. This is one political blow that Merkel will not feel able to take at this time, considering her party’s embarrassing defeat at the hands of the right-wing AfD party in the regional elections earlier this month.

Even if Merkel thought a bailout was worth the risk politically, she would likely be less sanguine about the potential effects on the rest of the Eurozone if Germany were to break its own golden rule. Italy is also going through its own banking crisis at the moment and its Prime Minister, Matteo Renzi, is facing his own insoluble dilemma - bail-in the banks using investors’ money (as required under EU law) causing outrage and political chaos, bail them out in defiance of the EU, or let them go to the wall? Already, Renzi has very publicly complained about the “disproportionate costs” imposed by Germany at an EU summit last December. If Germany, the driving force behind the EU’s Spartan regulations, were to break its own rules it would not only provoke a wave of indignation across the continent - it would render the EU’s “Bank Recovery and Resolution Directive”, drafted to avoid the possibility of a new sovereign debt crisis, utterly impotent.

So she should let Deutsche Bank fail then? The bank’s assets are valued at roughly €1.8trn - about half the size of Germany’s GDP. If the bank were to be hit with a fine it could not handle (estimates vary but some say €6bn would be the limit) and were unable to source enough fresh capital from the markets, which is perfectly possible, the result would be akin to the collapse of Lehman Brothers in 2008, largely seen as the beginning of the financial crisis. Such an event would not only drag Germany into crisis - it would likely usher in a new, even deeper, slump on a world scale.

So Merkel can either bailout Deutsche Bank and potentially provoke a return to 2010, or leave it to fail and provoke a return to 2008. Faced with such options she will likely do neither, preferring to find some sort of fudge allowing Berlin to prop up the bank without formally bailing it out. Whilst clearly preferable to the apocalyptic scenarios alluded to above, this would not solve any of the fundamental problems which caused the crisis in the first place. Instead, it will exacerbate the resentment and polarisation which already exists within Germany, and pave the way for an even deeper crisis further down the line, as the history of the EU over the last 6 years has demonstrated with increasingly tragic predictability.

At the beginning of this year, Royal Bank of Scotland predicted a “cataclysmic year” for the world economy. The crisis of Deutsche Bank may well prove to be the confirmation of this perspective. What the perspectives of RBS and all other strategists of capital lack however is any notion of how to escape this infernal cycle of overproduction, unprofitability and slump.

The impasse currently faced by the likes of Merkel and Renzi is not accidental - it stems from the absolute impasse of global capitalism in this period. The fact that a bank such as Deutsche Bank, in a country which had hitherto claimed to have avoided the crisis, has been visited by the ghost of Lehman Brothers 8 years after its collapse is graphic proof that the crisis unleashed in 2008 is far from exhausted.

Regardless of how Deutsche Bank is handled in the near future, the prospect of a new world slump looms large. After years of quantitative easing, austerity, and the biggest Keynesian investment program in history in China, the only real change in the world economy is that the poor have got poorer and the rich have got richer. This is the reality of capitalism in the 21st century. We must set our sights not at reforming it, but replacing it with a planned economy without the anarchy and injustice of the market.