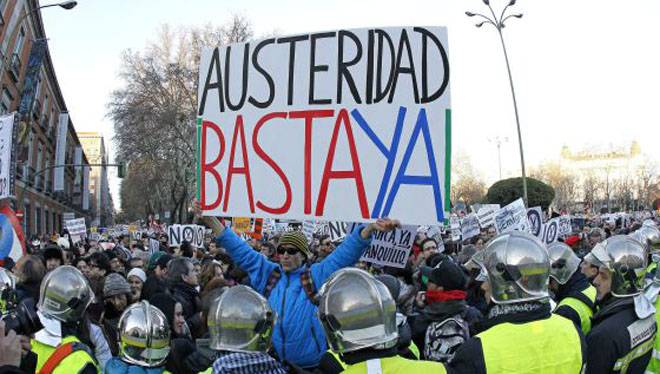 The PP government intends to approach the 2015 election by declaring, with great fanfare, that the crisis is over. It is true that GDP increased by 1.4% in 2014 and that net-employment increased by 417,500. This year GDP is expected to increase by more than 2%. Does this mark a fundamental change in the economic situation?

Editorial of Lucha de Clases no. 23

Without a doubt, after the massive closings of businesses and destruction of jobs during the first years of the crisis, the Spanish economy has temporarily stabilised, accompanying the precarious equilibrium reached by the world economy, which offers only stunted growth everywhere.

Neither were the bonuses reduced for the directors of the large companies. The administrative boards and members of upper management of the companies that make up the IBEX35 earned 675.9 million euros in 2014, 19% more than in 2013.

Instability of employment and wages

For working families, the situation has hardly changed. There has certainly been some creation of employment. But employment is unstable, with just 8% being in permanent employment. Even here, one in three of those permanent jobs created is part-time, with scarcely a few hours a day, a week, or a month.

And along with employment instability, wage instability persists. The last report from the National Institute of Statistics about wages, from 2013, found that new contracts signed that year set a salary 39% below the average, and 25% of the contractors earned 352 euros, just over half the minimum wage, mainly with part time contracts.

In addition, the FEDEA foundation, linked to the large employers, acknowledges that the wage reductions between 2008 and 2013 were 13% for women and 17 % for men (El País, 5/2/2015). And this situation has not changed in 2014, where the salary increases were minimal or nonexistent for the immense majority.

It is not surprising, therefore, that social inequality has deepened.   According to a study by Credit Suisse, published by El Pais, the richest 20% concentrate 68.8% of the wealth; the remaining 80%, meanwhile, posses 31.2% (Cómo cerrar la brecha [How to Close the Gap], 1/3/2015)

What, then, are the true bases of this "recovery"?  Contrary to the view of the government, the serious analysts are quite cautious about the soundness and stability of this "recovery". For example, the profits of the big businesses do not correspond to any increase in the level of consumption in Spain. The turnover for the large companies in Spain saw a meagre growth of 0.35 percent in comparison to 2013. That is not surprising given the instability in employment and the stagnation of wages. We now have five million unemployed and 11.5 million poor, alongside deep cuts in public spending. The majority of the profits of these major companies came from abroad (due to the heavy presence of the Spanish multinationals in Latin America, North Africa and the Middle East) or from extraordinary income (from stock market speculation, public debt, sale of property, etc.). With stagnant consumption and large levels of corporate debt, it is unlikely that these companies will turn their profits into significant investment.

A new economic slowdown on a European and international level – which is implicit in the situation – due to the existing huge levels of overproduction and the burden of global corporate, household and government debt, would push the Spanish economy back into recession.

The positive side of this fragile recovery is that it could inspire workers' struggles to claim back their rights and infuse the working class with confidence. Since this year is one of internal trade union elections, this will facilitate the renovation of trade union structures at the rank-and-file level with a new layer of militant and radicalised activists.