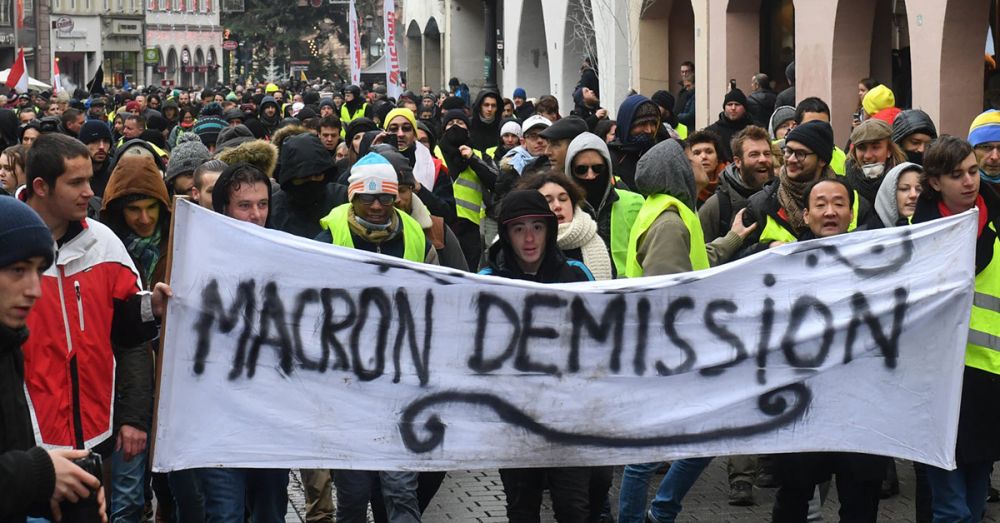 The mobilisation that began on 5 December is now at a crossroads. The indefinite strike called by French rail workers is at an ebb, after over 40 days of exemplary struggle. This ebb fits perfectly into the government’s scheme. Since the month of November we have emphasised that: “If the rail workers’ strike remains isolated, the government will have one of two options: either it can make concessions contained to the isolated sections of workers on strike, or it can count on their exhaustion. In either case, the masses in general would lose.”

By mid-January, the government thought that its victory was assured. But since then we have witnessed a new push from different sectors. Militant actions have emerged from lawyers and sewage workers alike, accompanied by a spectrum of teachers, electricians, nurses, dockers, etc. Protest actions, strikes and local demonstrations have multiplied. The New Year announcements of ministers, deputies and other figureheads have been disrupted and often cancelled. With a loud outburst of defiance and daring struggle, workers have downed their uniforms and tools before those who embody power. The bosses have attempted to pass off in a friendly vein, but their authority has withered amidst the downed uniforms, robes and books.

This effervescence was confirmed in a rebound in numbers mobilised for the protests of 24 January. Has the movement entered a new upward phase, despite the ebb of the transport workers’ strike? This cannot be excluded, for a reason that we have already emphasised on several occasions: this movement is fueled by the general anger which has accumulated for a long time.

Rejection of a system

Beyond the onslaught of the pension system, the entire government’s programme has become massively rejected. We can clearly see it in the demands and slogans of the mobilised workers: the question of pensions obviously occupies a prominent place, but only among many other slogans that denounce all of the infernal mechanics of budget cuts, austerity, "restructuring of the economy" and successive counter-reforms, which have degraded working conditions to unbearable levels.

Within the working class, Macron is viewed favourably by fewer than 10 percent, according to the latest polls. He has thus accomplished the feat of beating François Hollande’s record, who had already beaten Sarkozy’s. It makes sense: the effects of the crisis are piling up. Macron adds his own personal touch: colossal arrogance.

In this context, a movement against one (counter)-reform can serve as a catalyst for a much wider and more radical struggle. The government has feared it from the onset; in fact, that is the only scenario that could beat it into retreat. Unfortunately, the leadership of the unions on the frontlines – without even mentioning the professional capitulationists of the Laurent Berger type – have not tried to channel all of the potential power of the movement into the struggle. By strictly limiting the aim of the struggle to the withdrawal of the pension reform, the leadership of the CGT, FO and Solidaires have acted as a brake on the mobilisation of workers in the private sector, where a renewable strike entails particularly heavy sacrifices (loss of wages and risk of sanctions). These workers have all kinds of urgent, immediate problems, which the mere withdrawal of the pension reform would not solve.

To encourage the mobilisation of the private sector, which comprises the vast majority of wage-workers, the union leadership must go from the defensive and onto the offensive. They must aim not only for the withdrawal of the reform, but for a decisive break with the entire reactionary programme of the government. They must mobilise on the basis of progressive and radical demands. The claim of Philippe Martinez – that one may “negotiate” progressive measures with the government – does not hold water: Macron will never negotiate anything like this. A progressive programme will have to be imposed on the ruling class by another government, which means overthrowing the Macron government.

In March 1935, Leon Trotsky wrote about the situation in France, then in the throes of a deep economic and social crisis:

“Under present conditions, in order to force the capitalists to make important concessions, we must break their wills; this can be done only by a revolutionary offensive. But a revolutionary offensive, which opposes one class to another, cannot be developed solely under slogans of partial economic demands (…) The masses understand or feel that, under the conditions of the crisis and of unemployment, partial economic conflicts require unheard of sacrifices which will never be justified in any case by the results obtained. The masses wait for and demand other and more efficacious methods. Messrs. strategists, learn from the masses: they are guided by a sure revolutionary instinct.”

These few lines deserve to be pondered by all left-wing and union activists, because they shed light on a fundamental aspect of the current political and social situation.

In the press, on the radio and on television sets, the government’s henchmen sing praises of the “reformist” unions (CFDT, UNSA, etc.) and castigate the “troublesome” ones (CGT, Solidaires, etc.).

But what is a “reformist” union, according to their analytical framework? A union whose leaders support counter-reforms, social regression and austerity. Such classification as befalls Laurent Berger (CFDT); who dedicates his life to it.

The sleight of hand is obvious: counter-reform is rebranded as "reform". As for those who oppose it, they are accused of conservative "immobility". This terminology is worthless: it aims to confuse the minds of workers. Let us say things in the plain language of Marxism.

Today, in France, the leadership of all workers' unions are "reformist" in the Marxist sense of the term: they reject the idea of ​​a socialist revolution and defend the prospect of a long series of progressive social reforms within the framework of capitalism. It is true, in fact, that the leadership of the CFDT mainly defends counter-reforms. But that is the logical outcome of reformism: its ultimate consequence. The leaders of the CFDT have completely adapted to capitalism; they consider it to be the only viable system. Hence, when the capitalists demand drastic counter-reforms because of the deep crisis in their system, Laurent Berger faithfully nods and steers away from reform without a fight, into the realm of counter-reform.

Does this mean that revolutionaries are opposed to reforms? Absolutely not. Lenin already explained it in 1913:

"Marxists recognise struggle for reforms, i.e., for measures that improve the conditions of the working people without destroying the power of the ruling class. At the same time, however, the Marxists wage a most resolute struggle against the reformists, who, directly or indirectly, restrict the aims and activities of the working class to the winning of reforms. Reformism is bourgeois deception of the workers, who, despite individual improvements, will always remain wage-slaves, as long as there is the domination of capital."

Nowadays, owing to the deep crisis of capitalism, reformists are no longer able to even guarantee workers "isolated improvements" in their conditions. Either they play the game of counter-reforms (Berger); either they adopt a strictly defensive position (Martinez).

We may be answered: "This is wrong, because Martinez is asking the government to negotiate for a progressive pension reform". Very well, but that is an absurdity. Macron rules for the French ruling class, which objectively needs drastic counter-reforms. It will only "negotiate" counter-reforms, that is, to impose them on workers – if possible with the help of Laurent Berger. Any other perspective is a lie that throws confusion in the face of the workers. We must tell them the truth: in the current context, that of a deep crisis of capitalism, only a break with this system – a socialist revolution – will open the prospect of a serious improvement in the living conditions of our class.