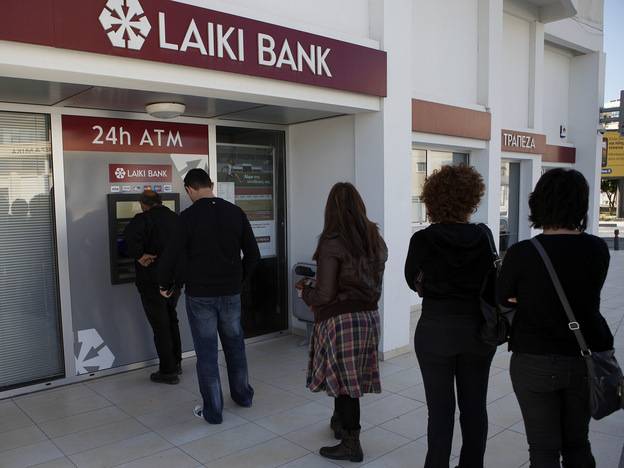 The Governor of the Bank of England, Mervyn King, once said that it was not rational to start a bank run but rational to participate in one once it started. These words of wisdom have once again become reality.

Panic-stricken people rushed to take out their savings from banks in Cyprus after Eurozone finance ministers effectively provoked a run on the banking system. Politicians are now scrambling to contain the growing crisis that threatens to reignite contagion across the Eurozone. The announcement that small deposit holders, including pensioners, were to make a levy on their bank savings (a so-called haircut) to pay for a 10bn euro bailout has provoked outrage. There are fears that banks may stay closed as cash machines run out of money.

This attack on depositors – despite past denials – raised concerns throughout the Eurozone as to the safety of other European bank deposits. The crisis in Cyprus demonstrates that the European banking crisis is far from over.

The unfolding banking crisis in Cyprus will have wide-ranging implications for the rest of the European Union. “Cyprus is in a state of extreme emergency”, said Nicos Anastasiades, the Cypriot President. Instead of being thrown a lifeline, they have been handed a millstone around their neck.

These actions in Cyprus, with a population of little over a million, have provoked wider concerns about the safety of Eurozone bank deposits. Already workers in Spain have seen their savings plundered. There is a growing alarm that no bank savings are safe. After all, just last week the people of Cyprus were told by the Finance Minister that their money was guaranteed and any levy was a “stupid idea”. Now that promise has gone up in smoke.

The original deal with German-led international bailout lenders was for a 6.75% levy to be imposed on all deposits under 100,000 euros, while accounts over that would be hit with a 9.9% levy. The Germans and Finns, starting with the German Finance Minister Wolfgang Schauble, were determined to impose brutal conditions on any loans. They were not prepared to finance a complete bailout and demanded that Cyprus shouldered the burden through a “bail-in”. “You’re trying to destroy us”, exclaimed one of the Cypriot negotiators.

But despite the protests, the Cypriots were soon brought to heel. They were informed that the island’s second largest bank, Laiki, was in such bad shape that it no longer qualified for the euro system’s emergency liquidity assistance – the cheap central bank loans that teetering Eurozone banks need to run their day-to-day operations. If there were no deal, the bank and the banking system would collapse. With the island’s banking sector seven times the country’s economy, the whole economic life of Cyprus would collapse, with ramifications across the whole Eurozone.

In effect, they have reneged on a guarantee that was made in 2008 after the collapse of Lehman Brothers, which promised that all savings were safe. This attempt to shore up trust in the banks has now gone by the board. Regardless of whether the levy on deposits will be implemented or not, the trust in the banks as safe places for deposits has been seriously damaged across Europe. Any financial instability in Spain or Italy could now lead to a run on the banks as depositors rush to take out the money to prevent any “hair-cut” affecting their savings. This is making the situation much more unstable.

With negative growth in the United States and the fear of deep cuts, the deepening crisis in Cyprus and Europe could not have come at a worse time. A new banking collapse in the present context of deep capitalist crisis could be dramatic. Remember that in 1931, the collapse of Austria’s Credit-Anstalt bank prompted bank runs across Europe and the United States, precipitating the Great Depression.

The original bank levy would clearly hit the poorest depositors harder than the richest deposit holders, hardly touching the Russian oligarchs who have pumped money amounting to 25bn euros into Cyprus’s banks from alleged tax evasion and money-laundering. Many correctly see this measure as really protecting the rich at the expense of the poor. As rumors of a levy began to spread at the end of February, 100-150m Euros a day started being transferred abroad.

Politicians and the European Commission are scrambling to put together some kind of compromise to reduce the burden on the smallest depositors. Either way, the international bankers want their pound of flesh. Again, this will not stem the growing anger as workers are asked to pay for the banking crisis, which was provoked when the island’s banks suffered heavy losses through their exposure to Greek sovereign bonds and non-performing loans.

Despite being a tiny island, Cyprus threatens to plunge the European banking system into crisis. “There are fears of contagion regarding Italy and Spain if this doesn’t go through”, states a Cypriot official. Cyprus was warned that if they failed to endorse this deal, European Central Bank funding would dry up and Cyprus’s second-largest bank and the finance sector would collapse.

“Risks for Europe are significant”, states an editorial in the Financial Times and goes on to highlight the political risk in further alienating public opinion, especially after the Italian and Greek elections. “The prescription of universal austerity combined with kid-gloves treatment of big investors in banks is increasingly toxic to European voters. Leaders have just added fuel to the fire.” (18/3/13)

“If one wanted to feed the political mood of insurrection in southern Europe, this was the way to do it”, states Wolfgang Munchau, their columnist.

Equally as dangerous is the economic fallout. The danger now exists of a generalized bank run, not just in Cyprus. The fear of contagion from Cyprus is ever-present. The banking system is in crisis everywhere, but especially in southern Europe. In Spain, the banks were propped up by outside help, but at a big price.

With Europe shrinking, the banking sector becomes more fragile and exposed. With growing unemployment and housing repossession (400,000 in Spain alone), the banks are exposed to more bad debt. Spain, Italy and Portugal look increasingly exposed, with France not far behind. Cyprus shows that any future bank rescues will be funded in part by depositors. As trust breaks down, so a bank run becomes more likely. Once fear reaches a critical point, people will act to withdraw their threatened savings, producing a run.

Not so long ago Mario Draghi, the President of the European Central Bank, declared the crisis was now under control. However, misplaced confidence can be a dangerous thing in such volatile and uncertain times. The patient appears to be recovering in intensive care, but is prone to relapse. Growth is dismal, with Eurozone gross domestic product still 3% below its 2007 level. Italian GDP is 7.6% below its pre-crisis peak. Spain is 6.3% below its crisis peak, while unemployment has reached 26%. There will be little if any growth this year.

This unstable environment is prone to shocks, political and economic. The fact that a small island could threaten the entire Eurozone is a measure of this instability. The current situation is on a tipping point which can lead to an economic avalanche.

They are all desperately trying to extradite themselves from the crisis. But each nation state has its own separate interests. The German capitalists are demanding austerity, while the rest of Europe is suffering under the weight of austerity. Appeals to Germany, the biggest power in Europe, to expand have been rebuffed, which means that the rest of crisis-ridden Europe is bereft of markets for its goods. This has locked Europe into continuing recession, with no end in sight. The brief “recovery” has run into the sand.

The governments of Europe appear powerless in face of this situation. Whatever they do is wrong, which reflects not only their impotence, but the deepening crisis of European capitalism. It is a re-run of the 1930s but on a higher level. A banking collapse, as in 1931, could once again herald a Great Depression. The crisis in Cyprus is but a harbinger of this perspective.