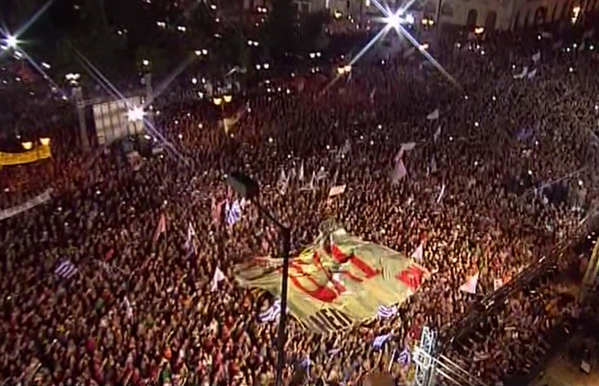 We received the following letter from a comrade who recently travelled to Greece.

I arrived in Athens on the second of July, I was reading the Financial Times on the plane from London to Athens, and I found that the comrade who I was staying with, Thomas Georgiou, was quoted as saying, “This is a class war. Voting Yes means more austerity and the status quo. That is what they want, the bourgeoisie and the upper class.” I would soon find out just how true this statement was.

When I landed in Athens, I immediately noticed something different from anywhere else I have ever been. You could feel a mixture of enthusiasm, anxiety and hope everywhere you went. There were OXI posters, leaflets, and banners everywhere. Everyone everywhere was engaged in heated political debates.

At noon I went for drinks with Thomas and his colleague from his law firm in a wealthy area in Athens. I noticed that although there were hardly any OXI posters in this area, there were not that many NAI [Yes] posters either. This reflects the nature of the NAI campaign, which was unable to mobilize many activists. Thomas’s colleague explained that she would be voting Yes in the referendum. She said that although she hates what austerity has done to the country, she does not want to risk leaving the Eurozone and the ensuing chaos. While wishing that she could vote No, she does not see a credible plan from Syriza, and will therefore vote Yes.

Back at Thomas’s house, we were watching the private media channels with his sister, Anna. The media was giving much more time to the Yes campaign than to the No. The campaign of fear launched by the bourgeois media against OXI was remarkable. The media was saying how pensioners would lose all of their savings as a consequence of a No vote. This is of course hypocritical because just days ago the media was arguing for cuts to pensions.The media campaign, clearly aligned with the interests of the ruling class, was reminiscent of the media campaign against Hugo Chavez prior to the Venezuelan coup in 2002. Anna soon told Thomas that, “This makes me sick, turn it off.”

On July 3, the margin between Yes and No in the opinion polls was seemingly narrowing. The level of anxiety and amount of political debates intensified. There were queues outside most banks, and some cash machines did not have cash, but it was nothing like what the media reported. I didn’t notice any shortages of goods in any of the grocery stores I went to, life was carrying on normally. There was no noticeable chaos, just the masses actively participating in politics.

That night there was a massive OXI demonstration in Syntagma Square. There were maybe 150,000 people there. The mood was enthusiastic, and yes, even revolutionary. The chants of “OXI! OXI! OXI!” were thunderous and hair raising. Tsipras gave a weak speech on how he was bringing “democracy” back to Europe, whatever that means. But the demonstrators responded very favourably to Tsipras, giving him huge applause. The truth is Tsipras has called up forces beyond his control. He saw the referendum as a way to strengthen his bargaining hand with the creditors, but the working class and youth see the referendum as a mass movement against austerity, with revolutionary potential.

When I asked a demonstrator, Christina, what she thinks about Tsipras’s tactic of negotiation with the creditors, she said, “It is very hard to negotiate with the institutions. I believe that the institutions are trying to remove Tsipras and Syriza from power in order to prevent other left wing parties from succeeding in Europe, such as Podemos in Spain.”

The next night, the fourth of July, I barely got any sleep as Thomas, Anna and I had to wake up at 5 am on Sunday to run a polling station for the referendum. Luckily, a representative from Syriza appointed me as official representative of Syriza and the OXI campaign at that polling station. This allowed me to freely monitor the elections as well as count the votes at the end of the day.

We noticed that there was an unusual amount of people voting early in the morning. By the end of the voting there was quite a good turnout of about 70 percent at our polling station.

At 09:00 a representative from the KKE arrived, The KKE had a position of abstaining from the referendum. In fact, they handed out their own ballots outside of the polling station. The ballots read something along the lines of, “No to the deal of the institutions. No to the deal of the government.” The KKE representative informed us that the only reason why the OXI demonstration on Friday was so large was because of the singers that performed!

Most of the time you could tell who was voting Yes and who was voting No. Those who voted No did so with a smile on their face and with enthusiasm. One No voter came with his mother and sister, who also likely voted no. When his mother dropped her ballot in the ballot box, he exclaimed, “Can you feel it mom?! Can you feel the power?!” They proceeded to high five. This is in contrast to the Yes voters. They tended to vote without enthusiasm and with great anxiety.

This is easy to explain. OXI voters feel like they are participating in something great, that they are building something new, something revolutionary. NAI voters know that they are voting for the status-quo, but are scared of the alternative.

At 19:00 we began counting the vote. Throughout the vote counting it was clear that “No” was winning. By the end it was 61 percent for No. When we heard news that the OXI was ahead around the country by 20 points, it became very emotional. The campaign of fear propagated by the ruling class had clearly had the opposite effect. This was a big victory for the working class.

That night there was a big celebration at Syntagma Square, there were about 20-30,000 people there. The mood was ecstatic, everyone was laughing, cheering, and even crying. Later in the night, the President of the Parliament, Zoi Konstantopoulou, came to greet the crowd and take pictures, without bodyguards. Although she has traditionally been on the right wing of Syriza, she has more recently been saying very left wing things. Many people now see her as a real woman of the people. The crowd was cheering for her and shouting, “Put them in their place!” and, “History is written by disobedience!” Although it was a big party, there was also a clear political mood. It was along the lines of, “Tsipras, now you must defeat the creditors, you must put an end to austerity.”