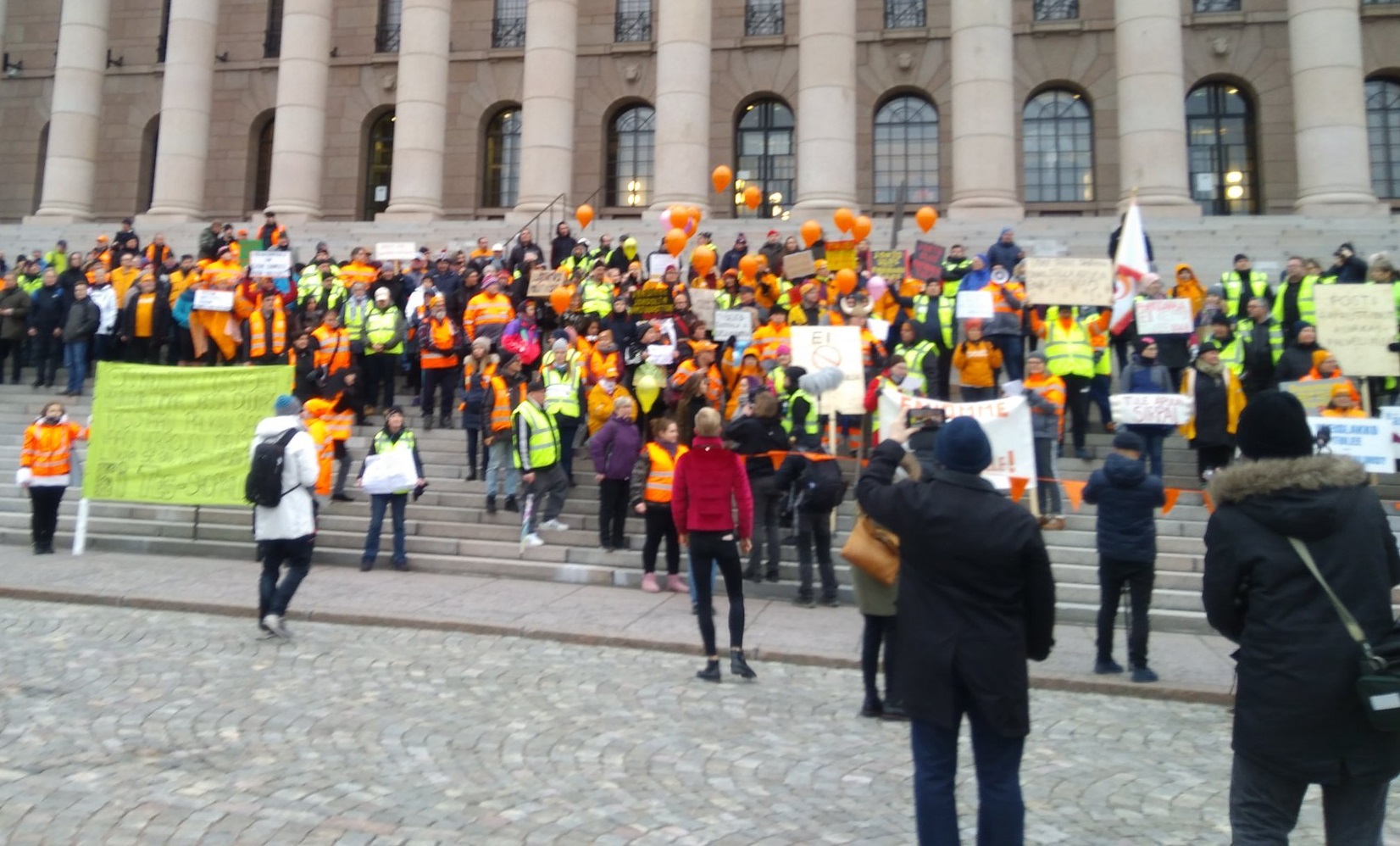 On Monday 25 November, all ships stayed in port, the buses stood still and the airplanes were grounded at Helsinki-Vantaa International airport. Finnish trade unions went on strike in support of the postal workers, who had decided to fight back against an attempt to force them to accept a worse collective bargaining agreement. After two and a half weeks of strikes, the postal workers won a crucial victory for the entire Finnish workers’ movement – but more battles lie ahead.

In August, the employers’ organisation Palta and the state-owned Posti Group Abp announced that 700 package-sorting workers would be transferred to the daughter company Posti Palvelut Oy, which is under Finnmedia, a different employers’ organisation than the mother company. This meant that the sorters would be transferred to the agreement between Finnmedia and the Industrial Union, from that of the Postal-and-Logistics Workers’ Union. It would mean a 30–50 percent wage drop, longer work days, and the implementation of a working model that would make life considerably more difficult.

Posti used the lessening volumes of paper mail as an excuse to make cuts and demand more flexible forms of employment. But an investigation by the Public Service YLE revealed how Posti has wasted millions in failed investments, including in the logistics service sector of up to 170 million euros in the period 2008–2015. These losses have been paid for by cuts in postal services in Finland.

Additionally, a considerable amount of the profits made have been used to pay for sky-high directors’ wages. 146.4 million euros have been paid out in dividends by the Posti Group during the last five year period. Last year, the CEO Heikki Malinen was paid 987,764 euros, which equals 36 postal workers’ wages. It is evident that the workers are being made to pay for the wastefulness of the management.

From strike to general strike

On 11 November, PAU, the Postal-and-Logistics Workers’ Union, answered the attack with a two-week strike involving 9,000 postal workers. The decline in the quality of the postal services has angered many and generated broad feelings of sympathy for the strike. According to the magazine Maaseudun Tulevaisuus (“The future of the countryside”), 60 percent of the Finnish population explicitly expressed support for the strike.

Posti used externally hired strikebreakers, breaching the International Labour Organisation (ILO) agreement of conflict rights. In one widely publicised incident, the employer cut a hole in a fence in order to let strikebreakers enter the building unnoticed by the workers on the picket line. In another case, postal worker Filip Djordjevic was expelled from the Vantaa logistics centre by security guards as he was distributing information about the strike to workers that had been brought in from the outside.

Several other trade unions swiftly took sympathy strike action in favour of the postal workers. On 25 November, the Flight Industry Workers’ Union (IAU) performed a 24-hour sympathy strike that forced the carrier Finnair to cancel 300 flights. Strike action by the Transport Workers’ Union (AKT) brought two thirds of the regional bus traffic in Helsinki to a halt. The Food Workers’ Union (SEL) declared a treatment ban of goods transported by Posti’s own cars or those by its subcontractors. The Electricians’ Union took sympathy strike action at seven postal-and-logistics centres. Passenger ferries traveling under the Finnish flag or with their home harbour in Finland stayed in port until the conflict was resolved due to several strike actions by the Seafarers’ Union. A total of 10 departures by Baltic sea passenger ferry company Viking Line were cancelled, and also the traffic of the ship Silja Symphony on the Stockholm-Helsinki route was affected. What developed was nothing less than a general strike movement.

After two and a half weeks of strikes, the employers backed down on Wednesday 27 November, and surrendered to the workers’ demand to move the package-sorting workers back under the PAU agreement. The postal workers’ strike and the supportive strikes demonstrate the strength of the working class when it moves into joint struggle. Solidarity between workers in different branches made it impossible for the employers to pit different unions against each other.

The ruling class on the offensive

The postal conflict has led to a crisis of the Social Democratic government, which has collapsed after only six months in power, with the prime minister resigning. The government had claimed to have forbidden Posti from trying to switch to a cheaper collective bargaining agreement, while in reality the plans of the management were approved by Social Democratic minister Sirpa Paatero. The reason behind the attack on Finish workers in the public sector is the need to alleviate the national debt, which stands at 59 percent of GDP.

The postal workers are not the only ones to face these type of brutal attacks. Also the Turku-based municipally owned company Arkea has tried to switch to a cheaper collective bargaining agreement, which made the Public-and-Welfare Sector Workers’ Union (JHL) initiate a three-day strike. Mikko, who works in the waste management sector, explained the reason behind the strike:

“We are on strike because they want us to accept lower wages and longer working hours. The workers are seen as too costly because our public debt is so high. Therefore, public sector workers are too expensive. The bigger question is whether the unions will have any say at all about the agreements, or if the companies will have the power to dictate the working conditions. Sure, Finland’s debt is too high, but it is always us regular people that are made to pay. The rich always get away.”

Investments in the Finnish industry have collapsed since the economic crisis of 2008, resulting in diminished competitiveness. Productivity has hardly increased since 2008, and not at all after 2017. The Finnish bourgeoisie is now trying to increase the competitiveness of the economy by attacking wages and working conditions.

Thus, it is not only the public sector workers who are facing attacks. A set of harsh demands are being presented by all employers. The 24 hours of unpaid work per year included in the so called “competitiveness agreement” are to stay; the bank holidays of the Ascension and Epiphany are to become regular workdays; holiday pay is to be halved and sick-and-maternity benefits lowered. All of this is bound to spark new, similar struggles in many sectors.

The victory of the postal workers shows the way forward for the Finnish workers. But to bring an end to the attacks, there is a need for a political alternative, prepared to go outside the narrow framework of capitalism. There are more than enough riches in Finnish society to finance both welfare and reasonable working conditions, but they are in the hands of the richest one percent.

The only solution is to nationalise the banks and corporations – but under the democratic control of the working class, rather than the top bureaucrats of the state. The resources could be used to finance a massive programme of investment in the welfare sector, in infrastructure and industry. This is the only way to guarantee a worthy existence for the Finnish workers.