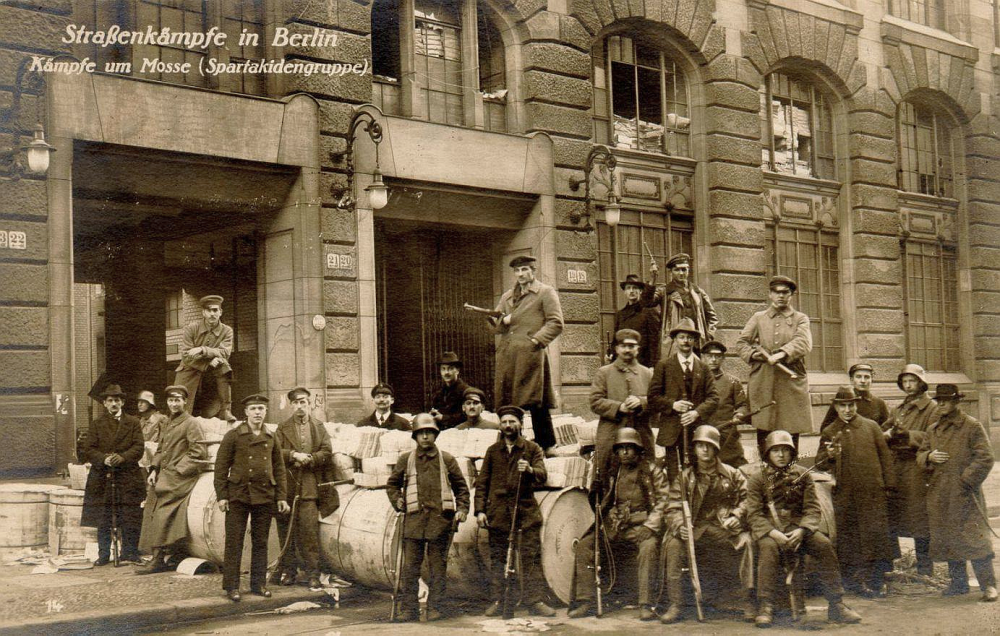 After 4 years of intense warfare, the German workers and soldiers ended World War I in November 1918. The emperor fell and a Social Democratic government came to power. This was Germany's own equivalent of the Russian "February Revolution" of 1917 that overthrew the Tsar.

The workers and soldiers had taken power into their hands but also handed it over to the very same people who so shamefully supported the war in 1914. Right-wing Social Democrats Ebert, Scheidemann and Noske were catapulted into power and Liebknecht and Luxemburg who had opposed the war, were left with a small group of 3,000 revolutionaries in the Spartacus League in Germany's own "February Revolution". Another 200,000 could be found in the more left-wing Independent Social Democrats (USPD) who initially participated in a coalition government with SPD.

Throughout November and December, workers' and soldiers' councils were set up in many places in Germany. These were organs of revolutionary power, very similar to their Russian counterparts - the soviets. Yet, most workers did not understand the full significance of these councils. Rosa Luxemburg argued in a speech to the founding congress of the Communist Party on New Years Eve 1918:

‘We must make the masses understand that the workers' and soldiers council is in all senses the lever of the machinery of state, that it must take over all power and must unify the power in one stream - the socialist revolution. The masses of workers who are already organized in workers' and soldiers' councils are still miles away from having adopted such an outlook, and only isolated proletarian minorities are clearly conscious of their tasks.' (‘Our programme and the political situation', Luxemburg, 1919)

German and Russian soldiers fraternise on the Eastern Front

The workers and soldiers were not yet conscious of the fact that they held power in their hands, and, like their Russian brothers and sisters in February 1917, they supported the compromisers, the counter-revolutionaries who, in Ebert's own words, 'hated revolution like sin' and were determined to put an end to it. In the same speech Luxemburg pointed out that the workers still had illusions in the Social Democrats:

‘Comrades! This first act [of the revolution], between November 9 and the present, has been filled with illusions on all sides. The first illusion of the workers and soldiers who made the revolution was: the illusion of unity under the banner of so-called socialism. What could be more characteristic of the internal weakness of the Revolution of November 9 than the fact that at the head of the movement appeared persons who a few hours before the revolution broke out had regarded it as their chief duty to agitate against it' (‘Our programme and the political situation', Rosa Luxemburg, 1919)

The workers had illusions in the leaders and the party (SPD) that had led them for many years. As a result, when elections came for the workers' councils, SPD triumphed over the Spartacists and also the USPD, who took up a position between the SPD and the Spartacus League. The SPD managed to secure four fifths of the 489 delegates to the first national congress of the councils.

The government under pressure 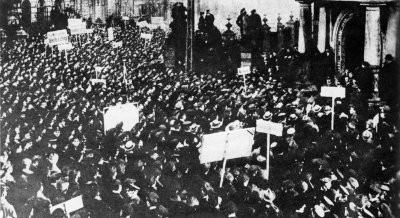 The November Revolution in Kiel

Support for the SPD by no means meant that the workers were reformist. The same SPD-dominated national congress voted through some remarkably radical policies. The congress supported the abolition of the standing army and introduction of a workers' militia, election, with the right of recall, of officers and nationalization of the key industries. The problem was, however, that the people that were set to organize and carry out these policies were by no means committed to them. Still, at times they were pushed into action by pressure from their supporters.

A short time after that Ebert had been appointed prime minister, an armed demonstration appeared outside the parliament, where Scheidemann was having coffee. The angry crowds brought him to the balcony in a hurry, where he announced Ebert's appointment. As in an afterthought he shouted 'long live the German Republic' and with those words the republic became a fact. Ebert was furious with his colleague, arguing that he had no right to proclaim the republic, but the deed was done. Any attempt to restore the monarchy would only have further radicalised the German workers, and the German ruling class had to accept the situation.

Like in Russia, Social Democrats had for a long time been putting forward the slogan of a constituent assembly, as a democratic demand against the rule of the Kaiser and the Tsar. Like in Russia, this demand was resurrected in November 1918 by the reformists, as a way of stalling for time. Instead of recognising the fact that the working class had, in effect, taken power into its hands, the constituent assembly would provide an excuse to delay any attempt by the workers to use this power. As a result, many impatient elements among the Spartacists were hostile to the assembly and instead argued for all power to be transferred to the soviets.

Karl Radek, emissary from the Bolsheviks, commented when he arrived in December that

'It was a very tempting idea to counterpose the slogan of the councils to that of a constituent assembly. But the congress of councils itself was in favour of the constituent assembly. You could hardly skip over that stage. Rosa and Liebknecht recognised that...But the Party youth were decidedly against it, "we will break it up with machine guns"' 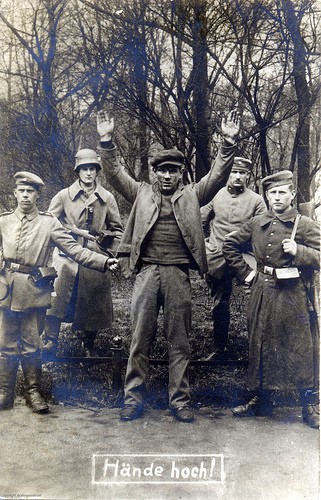 A Spartacist arrested by the reactionaries in 1919

The workers were, as was stated before, still not conscious of the significance of the workers' councils, that they were a higher form of government, more democratic and appropriate for a real workers' state. The Spartacists thus in their propaganda started to separate off the most advanced layers of the working class from the more backward.

Lenin commented on this in his Left-Wing Communism: an Infantile Disorder:

'In Western Europe and America, parliament has become most odious to the revolutionary vanguard of the working class. That cannot be denied. It can readily be understood, for it is difficult to imagine anything more infamous, vile or treacherous than the behaviour of the vast majority of socialist and Social-Democratic parliamentary deputies during and after the war. It would, however, be not only unreasonable but actually criminal to yield to this mood when deciding how this generally recognised evil should be fought.' (Lenin, Left-Wing Communism)

Unlike the Bolsheviks under the leadership of Lenin in 1917, the newly formed Communist Party proved unable to steer a course between the opportunism and reformism on the one hand and  ultra-leftism on the other. The Bolsheviks in 1917 supported the calling of the Constituent Assembly at the same time as they urged the reformist leaders of the Soviets to take power. This they did in their propaganda right up to they were themselves the majority in the Soviets and could put both of the demands into practice.

The immaturity of the revolution was ruthlessly exploited by the SPD government. Using the most backward elements of the peasantry and the petty-bourgeoisie, it launched a serious of provocations against the revolutionary workers in the cities. Some of the soldiers came from these layers and were prepared to take up arms against the workers.

With the connivance of the government, right-wing soldiers were formed into armed groups of counter-revolutionaries, called the Freikorps. They were trained in counter-revolutionary operations in the Baltic states where they operated against the Bolsheviks.  The success of these troops against the young workers' state was such that the victorious allies made it part of the cease fire that they should continue to operate on occupied territory in the east - an extraordinary measure. 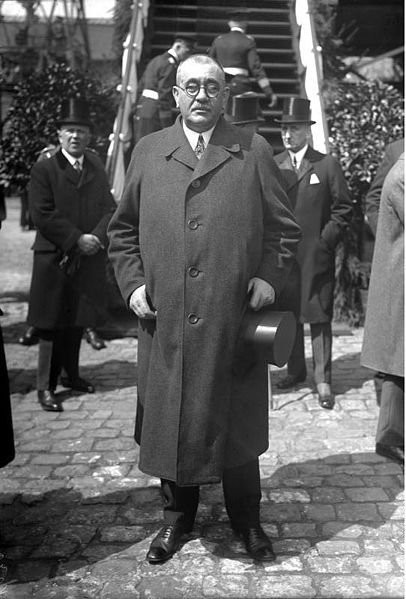 Gustav Noske was the Social Democrat who became responsible for the organization of these units and their deployment against the Spartacists, and he was henceforth known as the "bloodhound" of counter-revolution. In early 1919, he readied the Freikorps and organized a provocation. The battle ground was to be the chief of police in Berlin, Emil Eichhorn, who was sympathetic to the revolution and member of USPD. On 14 January, Rosa Luxemburg wrote:

'What triggered this week of combat? As in all previous cases, such as December 6 and December 24, it was a brutal provocation by the government. Like the bloodbath against defenseless demonstrators in Chausseestrasse, like the butchery of the sailors, this time the assault on the Berlin police headquarters was the cause of all the events that followed.' (Luxemburg, 'Order Prevails in Berlin')

The government sacked Eichhorn and the workers mobilized to resist. As part of the struggle, armed workers seized the headquarters of the bourgeois press and the SPD paper Vorwärts. A particularly ferocious struggle took place over the latter, costing the lives of hundreds of workers. Inevitably, the courageous but isolated Berlin workers were defeated and reaction followed. The Communist party press was closed down and Rosa Luxemburg and Karl Liebknecht were arrested and murdered in this striking resemblance to the reaction in Russia after the July days of 1917.

Events in Germany had moved quicker than they did in Russia. After only two months, the revolution had suffered its first heavy blow with the defeat of the Berlin workers. This defeat was by no means the final defeat of the working class that the counter-revolution had been looking for. Subsequent event were to prove, however, that the ultra-left attitude that the Spartacists took in these months had serious repercussions for the future development of the German Revolution.