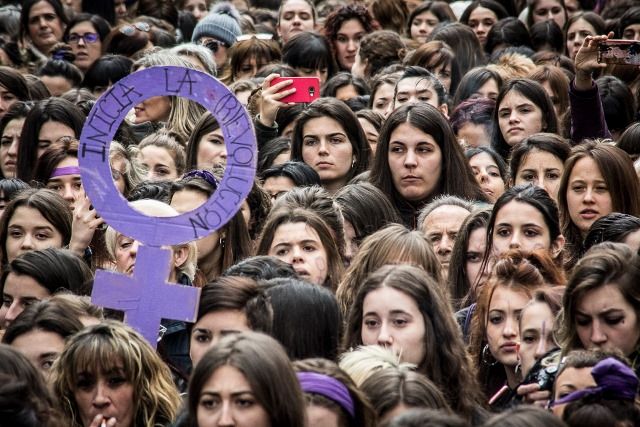 For International Working Women’s Day on 8 March, the unions have once again obtained legal notice for the general strike called by the feminist movement. For several months, preparations have been underway in all parts of the Spanish State for what is to be an even more successful protest than that in 2018.

The economically active female population stands at almost eleven-and-a-half points below the male, and 90 percent of women who are inactive are in that position because they are doing housework. Women represent 73 percent of part-time employment and 90 percent of people who take leave of absence for childcare. In addition, the unemployment rate for men is 12.87 percent, while for women it is 16.26 percent.

[This article was written by Lucha de Clases (Spanish section of the IMT) ahead of International Working Women’s Day, when there will be a general strike throughout the Spanish State for women’s rights. Read the original in Spanish.]

These are just some of the data that show how women remain in a very unfavourable situation with respect to men, and bear the burden of double oppression: as workers and as women. That is why we women have said “enough!”, and 8 March has become one of the year’s most important days of struggle.

Working women face all kinds of prejudices when it comes to finding a job, and indeed in the workplace, especially if we are of childbearing age, since employers regard our labour as carrying an additional cost. That is why large multinational corporations have started offering us the ‘opportunity’ to freeze our eggs so that we do not stop working in the most productive years of our lives, and instead become mothers after the age of 40, when our professional careers are more consolidated. They try to convince us that it means liberation, but in fact it only represents the preservation of business interests.

The companies offering this option to their female employees are now a minority, but are they not forcing women to renounce motherhood? Obviously we respect and support all the decisions of women in this regard but we denounce this trap disguised as modernity, in which women workers are forced to choose between dedicating ourselves to domestic chores and our families; to generate profit for others by renouncing our family life; or to be slaves of both the family and work. In short, we are forced to live under the yoke of two inseparable systems: patriarchy and capitalism.

Capitalism squeezes out all our productive potential through lengthy working days, temporary contracts that make it impossible to plan for one’s future, and a rhythm of work deepens the inertia of life. Once a woman becomes a mother, the obstacles in her working life multiply. Reduced working hours or maternity leave mean a reduction in social security contributions, which will have significant consequences for pensions in the future. Can we speak of rights if we have to decide between being mothers or maintaining our present income (in the form of wages) and future security (our pensions)?

But we must not only endure this double oppression in the workplace. According to government data, in 2018, 125,223 incidents of gender-related violence were reported to the police and 47 women were murdered. In addition, in 2017 there were 2,219 reports of rape, of which only 68 percent were investigated. 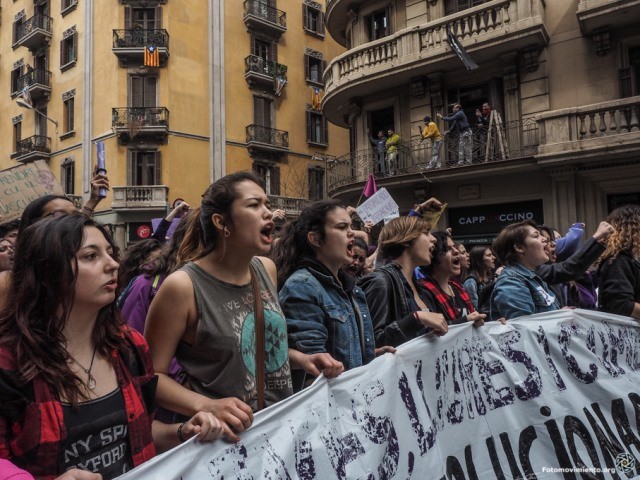 Only with an effective strike, with participation by both female workers and male workers, can we fight for an end our oppression as women and as workers / Image: Flickr, Fotomovimiento

We are facing a situation of helplessness when we are physically, psychologically and sexually assaulted. This was demonstrated with the case of "the wolf-pack", when a young woman was the victim of a gang rape and came up against the wall of a judicial power inherited from Francoism, which limited itself to condemning those accused for sexual abuse instead of rape. Recall that, among the perpetrators was a soldier and a civil guard. They were all released on bail in June 2018, as there is no final decision and the Navarre Court understands that there is no risk of destruction of evidence, escape or repeat offence. This is scandalous, since four of the five members of the pack are facing another trial, in which they are charged with the sexual abuse of another young woman from Pozoblanco (Córdoba).

We also know the case of Juana Rivas, who was accused of "child abduction" when she came to Spain with her two children against the will of the father, who had been convicted in 2009 of abusing her. She again denounced her former partner for abuse in 2016, but that complaint was sent to Italy for lack of a translation and was not taken into account. Currently, the children of Juana Rivas have lived with their father for more than a year and their custody hearing has not yet taken place.

Working-class women, immigrants or those on low income have to suffer the male chauvinist prejudices of the police and judges, who in many cases ignore our complaints. It is in these concrete cases that the true role of the so-called justice system is revealed: safeguarding the established order of the ruling class.

But if we talk about violence against women, we cannot ignore one of the worst forms of slavery that women experience: prostitution. It is estimated that there are some 100,000 women who are forced into prostitution either because they are victims of trafficking or because they live in a situation of extreme need. As Marxists we can only oppose the legalisation of prostitution, since it would be legalising the slavery of thousands of women who have no other way to survive.

In addition to prostitution, in the last year, the debate on surrogate pregnancy has been fueled. In this practice, a woman rents her uterus in exchange for money to gestate an embryo from a different father and mother. Some liberals label surrogacy as an "altruistic and supportive" act towards two people who want to, but cannot be parents. In the words of Ciudadanos leader Albert Rivera, "Is there something more feminist than a woman helping another woman to be a mother, altruistically?" However, acts of solidarity and altruism are never accompanied by money.

Once again we see how male and, of course, female defenders of capitalism disguise the slavery of women under the mask of modernity and reform. You just have to listen to Ciudadanos leaders Inés Arrimadas or Begoña Villacís to hear evidence of this.

Class struggle lies behind surrogacy: wealthy men and women pay a poor woman to gestate an embryo for them. It is an act that, just like prostitution, is done out of pure necessity. An act that would not be carried out if the women who rent their uterus had their material needs catered for. How many rich women lend their uterus to this "altruistic" cause?

That is why we must strive to create the necessary material conditions that allow a dignified life, without having to resort to turning our bodies into commodities. That means guaranteeing employment for the entire working class and unemployment benefits equal to the minimum wage for those without a job. Only in this way will the foundations be laid for a new society that will eradicate all the forms of slavery women workers endure under patriarchy and capitalism.

A struggle of women alone?

The struggle for equality is not only a matter of gender, it is also a matter of class. Our natural allies are our partners in the working class, and not bourgeois women. They themselves reject the call for strike action. The women representatives of right-wing political parties are only forced to go to the demonstrations, very reluctantly, by the movement of millions of women and men against patriarchy. They are defenders of and privileged by the capitalist system, and they themselves (as businesswomen or in the political sphere) carry out actions that oppress women workers.

Therefore, we do not share the idea that male workers and activists should be excluded from the tasks of organisation and participation in the strike and demonstrations on 8 March. The best way to combat the prejudices that many of our male colleagues still have towards the struggle of women is to incorporate them into our struggle and make them aware of our problems.

The experience of the strike and demonstrations last year showed that the idea of a day of mobilisation exclusively for women did not connect with the needs and instincts of the young women and women workers. Everywhere, masses of young people of both sexes overflowed the demonstrations, ending attempts to establish non-mixed blocks. Young students of both sexes participated in strike pickets at universities. And, of course, in the factories and workplaces, the strikes had a greater impact the more male workers were involved in them, rather than being relegated to covering for their female counterparts.

What kind of strike do we need?

We should remember that last year’s strike was called for in different ways. On the one hand, minority unions called a 24-hour strike, while the main unions CCOO and UGT called for a two-hour stoppage. This year, UGT and CCOO have legally registered a 24-hour strike and, although they call for a two-hour stoppage, they are open to "deciding on the convenience of extending the strike throughout the day" for which "they will provide the necessary legal cover. "

This is a small step forward. This year, there will be fewer doubts about the legality of the 24-hour strike but a clear call for such a strike, with the objective of bringing the whole country to a standstill, is still lacking. This will only be accomplished if all the unions and feminist movement agree on the same strike terms, including a clear call for the participation of both female workers and male workers for the same demands. The programme we defend as Marxists includes:

Only with an effective strike for these demands will we be in a position to put the system on the ropes, and therefore be in a better situation to fight for an end, not only to our oppression as women, but also to the oppression that we suffer as workers.