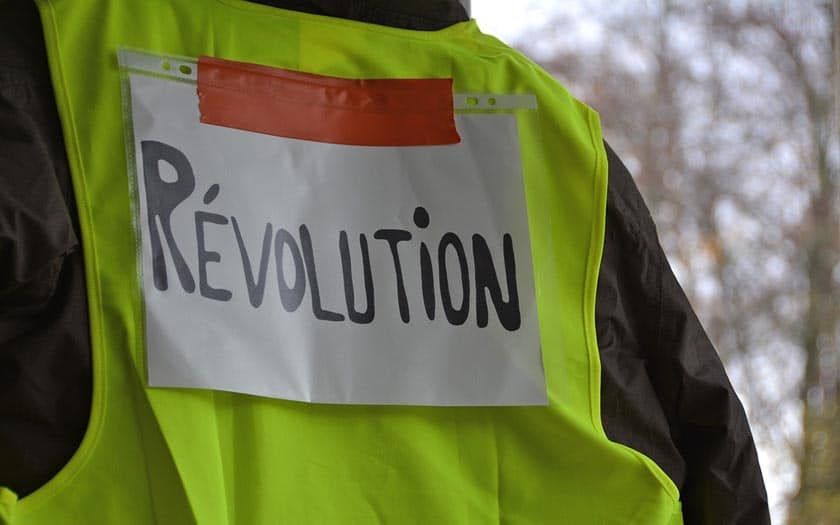 For the fifth consecutive Saturday, the yellow vest protesters took to the streets of France on 15 December in what was dubbed ‘Act V’ of the movement. This was after Macron’s announcements of “concessions” on 10 December; and in a week that saw a mobilisation of students and a national day of action, called by the CGT trade union. After five weeks, what stage has the movement reached, and what are its perspectives?

The official figures from the Ministry of the Interior talk about 66,000 demonstrators across France this weekend, which would mean a 50 percent fall compared to the previous week. As we have already explained, these official figures are a gross underestimation of the real number of people in the streets, but it is true there has been a certain diminishment. Why is this?

The figures mask an important fact: the use of heavy police repression to physically prevent demonstrations from taking place. In Paris, dozens of tube stations were “preventatively” closed, stopping people from actually getting to the demonstration. Police had set up checkpoints at key locations in the capital where protesters were searched and in some cases “preventatively” arrested (though in much smaller numbers than the week before).

People gathering at Opéra Garnier in Paris, one of the rallying points for Saturday’s protest, were penned in by the police for over four hours and then told to disperse (how could they possibly comply?) just before riot police charged against the crowd:

these were the images earlier on in Paris Opera Garnier when the police charged against a group of #giletsjaunes students and railway workers they had penned in for four hours to prevent them from marching in #acteV of the anti-Macron movement pic.twitter.com/Ixs5WNoNyL

As in the previous week, hundreds of protesters who had gathered at Gare St Lazare were also penned in and were only able to evade the police cordons with great difficulty:

As well as using tear gas canisters, water cannons, armoured cars and large number of CRS riot police officers to prevent the yellow vest demonstration from going ahead, there had been a concerted campaign all week to discourage people from marching, using an attack in Strasbourg last week (in which a gunman killed and wounded several people) as an excuse.

Of course, the Strasbourg attacker had already been killed by the police, but still there were “security concerns”, which led government figures and the mass media to call on yellow vests to stay at home and not to demonstrate. In some cities, the government prefects went as far as banning all gatherings as a result.

In some of the provincial cities, there were peaceful demonstrations, but in most cases these were then attacked by riot police with volleys of tear gas. 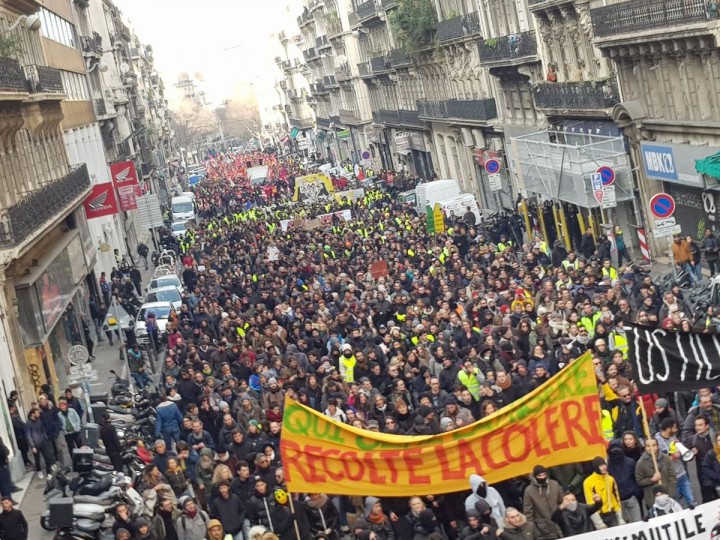 Peaceful demonstrations all over France were attacked by riot police with volleys of tear gas. Banner reads: "if you sow misery, you reap rage" / Image: public domain

To all intents and purposes, the government has de facto abolished the right to protest in France. Of course, then the mass media and the French government revel in headlines saying “the movement is running out of steam”. Despite all of this, tens of thousands marched across the country: in Marseille, Toulouse, Bordeaux, Nantes, Lille, Dijon, Le Havre, and dozens of other towns and cities.

As well as the demonstrations, many of the road blockades continue and there were also actions to allow drivers to pass freely at motorway toll booths.

The week that began with Macron’s half-hearted concessions also saw school students come out on strike and demonstrations in hundreds of schools, in a mobilisation they called  Black Tuesday. In the Paris region, they had the support of the teachers’ unions.

Then on Thursday, there was a national mobilisation of university students, who in many parts of the country have held mass General Assemblies and voted resolutions in support of the yellow vests movement and gone on strike for their own demands.

On Friday, 14 December, the CGT called for a national day of strikes over a series of demands including a general increase in wages and pensions. There were a few strikes, notably in the harbours and the energy sector, but the day fell well short of what was required, namely, a 24h general strike as the beginning of an all-out workers’ offensive against Macron. The CGT leadership had called for this “day of strikes” in an attempt to let off steam, as many activists in the ranks of the union were furious at the position of the general secretary, Martinez, who has refused to join with the yellow vests movement.

In some regions, where the local CGT has more clearly come out in favour of a joint movement, there were sizeable demonstrations (Marseille, Toulouse, etc) with a large turnout of school and university students. This shows the potential that exists for a wider movement, but at the same time it reveals the inadequacy of the position of the CGT leaders.

While Martinez talked about the need for “strikes everywhere” he studiously avoided using the words “general strike”. The day of action had been called without any direct link to the yellow vests protests, and no real effort had been made at a national level to seriously mobilise the forces of the CGT. This is a tactic the French trade union bureaucrats of the CGT have become very skilled at: when the pressure from below requires it, you call for a national day of action, use some radical but vague language, do nothing to seriously organise and then turn around to say “see, there is no mood for a general strike, the conditions are not there”.

Taking into account all of these factors, the length of the movement, the lack of a serious attitude on the part of the trade union leaders, brutal state repression as well as the impact of concessions by the government (which we shouldn’t forget, has cancelled the fuel tax increase that triggered the movement in the first place), it is no surprise that the demonstrations on Saturday represented a step back from the previous week. Many of the movement’s participants are starting to ask themselves, what are the yellow vests’ perspectives, and where are they going? In the absence of clear leadership, and the refusal of the CGT national leaders to offer any, it is no surprise that the movement seems to be losing steam.

Still, even at this stage, there is overwhelming support for the movement. Even though the gilets jaunes have, even at their peak, mobilised fewer numbers than previous trade union battles, their support from the public has always stayed between 65 and 75 percent, depending on the opinion polls cited, and this remains the case. It is also true that the percentage of people supporting a continuation of the movement has gone substantially down from a high of over 70 percent, but is still just over 50 percent now, revealing that these protests articulate a deep-rooted discontent with the way in which working people are being made to pay for the crisis of capitalism, while the wealthy continue to amass vast riches.

The CGT has now called for another “day of action” on 18 December and the gilets jaunes are calling for an Act VI on Saturday. It remains to be seen if a combination of factors (tiredness, concessions, repression, lack of leadership) will lead to an end to the current phase of the movement. Even if that were to be the case, none of the underlying frustration and anger has been resolved.

What is clear is that the Macron government, which was hyped up as a strong “liberal” force, able to carry through the “necessary reforms French society needs” (from the point of view of the ruling class) has been decisively weakened by the protests, and its authority is in tatters. The latest IFOP monthly barometer, published on 16 December, puts Macron’s popularity at barely 23 percent, with those who are dissatisfied with his presidency at 76 percent. Furthermore, the mood of those who are against Macron has hardened, with the percentage of people saying they are “very dissatisfied” jumping from 39 to 45 percent in one month. For comparison, Macron’s ratings were 62 percent just after his election in May 2017.

The yellow vests movement, however, did not only challenge Macron’s government of the rich, but in a confused and tentative way, has articulated a deep malaise about the whole regime of French society and brought to the surface the fundamentally undemocratic character of bourgeois democracy.

And these sentiments are not limited to France. There have been a number of “copycat” demonstrations in Belgium, the Netherlands, Canada, Poland, Israel, Tunisia, the Central African Republic, Burkina Faso etc. The Egyptian government has even gone so far as to ban high-visibility jackets altogether, fearful of copycat mobilisations.

The political character and demands of these international manifestations have been mixed (with both right and left-wing examples). However, the fact that the gilets jaunes have been adopted as an international symbol of rebellion shows that the same contradictions that sparked the movement in France exist on a worldwide scale. There have also been promising examples of international workers’ solidarity towards the yellow vests. For example, the South African Federation of Trade Unions sent a message of solidarity to the protesters in France.

A section of the most advanced workers and youth will have drawn important political conclusions from the movement, the main one perhaps being that the only way to achieve one's demands is through radical, mass, direct action on the streets. It is imperative that other lessons are also drawn, particularly about the need for any mass movement to have a national democratic and accountable leadership, armed with a programme that can offer a clear alternative to the crisis of capitalism.