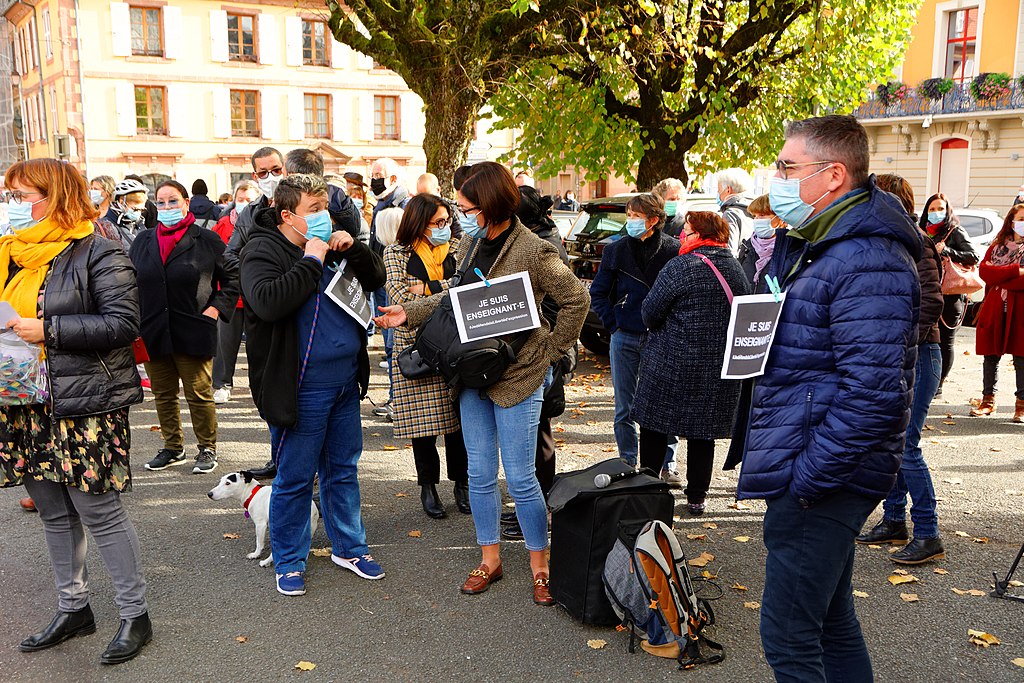 This statement by our French comrades condemns the brutal assassination of a teacher in the Conflans-Sainte-Honorine suburb of Paris by an Islamic fundamentalist. We reject hypocritical attempts by the right wing in France to exploit this tragedy as part of a propaganda war against Muslims. Imperialism is responsible for creating the poisoned soil in which fundamentalism flourishes.

The assassination of Samuel Paty last Friday has triggered a wave of indignation across France. It’s the first time that such an attack has targeted a teacher. Public sector teachers are in a state of shock, disgust, fear and anger.

We condemn this despicable crime without the slightest reservation. As with all these attacks, its consequences are entirely reactionary. To understand this, you only have to listen to the politicians and journalists who, since Friday, have engaged in disgusting political exploitation of this tragedy. In a flurry of racist propaganda, they have come out with calls to "fight against immigration," question the right of asylum, ban headscarves, punish school students and parents guilty of "attacks on secularism," even expel entire families from the country – and so on, each party trying to outdo the rest and appear as the toughest on this issue. Those who recently insulted teachers and called them "lazy" and "privileged," have suddenly made them the heroic pillars of the Republic. At the same time, a part of the left-wing opposition – Mélenchon’s France Insoumise, in particular – is being accused of "Islamo-leftism", or even of being an "accomplice" of Islamist terrorism.

The left and the trade union movement must not remain passive in the face of this propaganda and the measures that the government announces or prepares. As always, so-called "national unity" is a trap that serves only the interests of the French ruling class, which bears a large part of the responsibility for the terrorist attacks that regularly strike our country. The labour movement must emphasise and denounce this responsibility, which is obvious on several levels.

But first of all: why was Samuel Paty not placed under police protection? State services, including the national intelligence agency, were aware of the complaints and videos targeting him. In particular, while we don’t know precisely what role he played in Paty’s death, it was known that Abdelhakim Sefrioui, a Franco-Moroccan Islamist activist, had previously met with the principal of Collège Bois-d'Aulne complaining about Paty, and he posted a video online attacking him days before his assassination. Sefrioui’s name featured on the File of Alerts for the Prevention of Terrorist Attacks database and he had been flagged by law enforcement as a serious threat. Was this not enough to place the latter police protection? This question is avoided by all those who prefer to exploit this crime on television for propaganda purposes against all Muslims, even as they claim not to be conflating Muslims and terrorists.

This political offensive against Muslims, which has been ongoing for many years, seeks to divide the working class and divert attention from those who are really responsible for the crisis of capitalism, and the unemployment and misery it produces. But this offensive is also one of the factors that feeds Islamic fundamentalism. It is a vicious circle: with each attack (and even in the absence of attacks), reactionaries spew their propaganda against Muslims. At the same time, this propaganda, and the state's attacks on freedom of religion (e.g. through the ban on headscarves), is ideal material for the propaganda of fundamentalist militants. So, far from contributing to the "struggle against fundamentalism", the media outbursts against Muslims only contribute to strengthening it, providing it with new supporters and candidates for "martyrdom".

Imperialism and the scourge of fundamentalism

There are of course other factors that have nourished, and still nourish, the reactionary tumour that is fundamentalism. First among these factors are the crimes of imperialism – especially French imperialism – in the Middle East and Africa. The media knights in the "struggle against radicalisation" never say a word about these crimes, for obvious reasons: most of them support the French imperialist interventions in Afghanistan, Libya, Iraq, Syria and the Sahel. Yet these interventions, like those of U.S. and British imperialism, played a decisive role in the development of fundamentalist organisations, including al-Qaeda and the Islamic State. These organisations flourished in the bloody chaos sowed by imperialists in Muslim-majority countries. Around the world, images of these imperialist wars have provoked a burning indignation among countless Muslims and pushed some of them into the arms of the fundamentalists. In the Sahel, French imperialism is now waging a so-called "war on terror": in reality, a war to defend the interests of French multinationals, which only serves to swell the ranks of the terrorists.

In 2013, following in the footsteps of the US, French imperialism supported the so-called moderate rebels who were fighting against the Bashar al-Assad regime in Syria. It is now well known that these "rebels" were no more "moderate" than the murderer of Samuel Paty. French imperialism has supported, financially and militarily, fundamentalist militias that have sowed terror in Syria, all with the approval of the majority of politicians, who now demand "extremely firm" measures against anyone suspected of the slightest "sign of radicalisation", including middle and high school students! Their cynicism and hypocrisy know no bounds.

Finally, to complete this picture, we should recall that French imperialism maintains excellent political, economic and military relations with arch-reactionary regimes such as Saudi Arabia and Qatar, which heavily finance fundamentalist organisations. These regimes constitute the big leagues in terms of fundamentalism. But what prevails, from the point of view of the Macron government (as well as previous ones), are the fundamental interests of French imperialism. In other words: "Move along, there's nothing to see here!”

Imperialist interventions in the Middle East and Africa; imperialism’s direct and indirect support of fundamentalist organisations; permanent propaganda against Muslims; various forms of discrimination against them, while they also suffer the full brunt of misery, unemployment and police harassment: these are the main factors that have fed and still feed fundamentalism in France. In other words, today as in the past, terrorism is one of the horrible symptoms of a sick, rotting system that is dragging humanity tp a bloody dead end. Fundamentalist barbarism is the flip side of imperialist and capitalist barbarism. This is what the leaders of the left and the trade union movement must explain, instead of rushing into so-called "national unity" with right-wing parties, which are themselves partly responsible for the fundamentalist tumor

If, instead of clinging to capitalism, the leaders of the labour movement were to present a revolutionary programme and perspective, this would generate enthusiasm among many young people and Muslim workers, including those who currently show interest in fundamentalist rhetoric. Many of them would turn their backs to the reactionary agitators and join the struggle against oppression, against imperialist wars, against exploitation, and for socialism. However, only the victory of this struggle will make it possible to put an end to fundamentalism, as with all the other scourges that the crisis of capitalism is constantly aggravating.