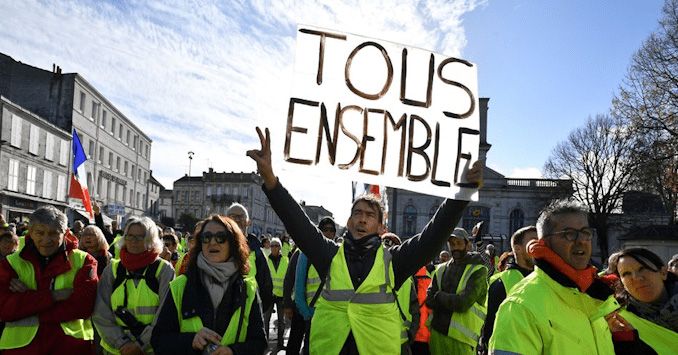 The power of the yellow vests movement never ceases to surprise – and intimidate – its adversaries. Of course, the bourgeois and their lackeys (in politics and the media) know that poverty exists. They hear about it, distantly, but they are totally disconnected from the real living conditions of the people, their suffering and their problems. Then, from their lofty position of privilege, with all their power and their fortune, they said to themselves: “a little more or a little less austerity, what difference will that make?” The answer hit them like a ton of bricks.

This is an editorial if the French Marxist journal, Révolution, originally published on 1 Feb 2019

The depth of the movement 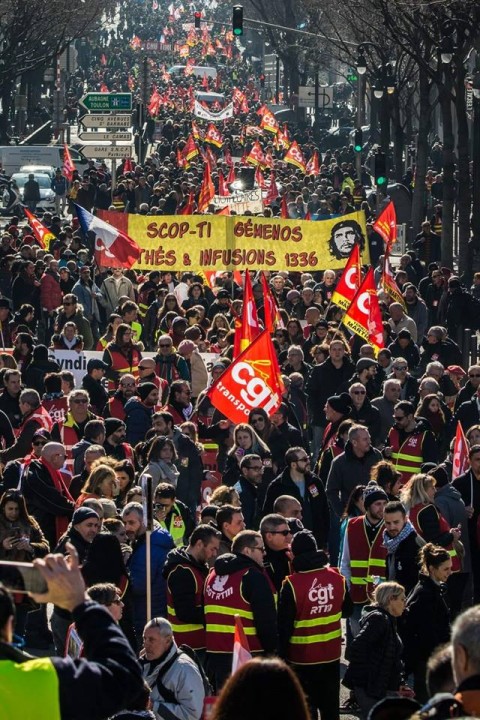 The movement seized on a day of action scheduled by the CGT, February 5, as the starting point of an "unlimited general strike" / Image: fair use

Revolution has said time and again in recent years: no political regime can impose a permanent social regression without causing an explosion of the class struggle at a certain stage. It is a law of history that admits of no exception. Another law: the longer the masses wait, suffer, endure, the more powerful is their revolt when the time comes. But it is a fact that millions of exploited and oppressed people have suffered in silence for decades. They went out of their way to pay the rent, the bills, taxes, for food - in short, the basic necessities for survival. And over the years, they have faced more and more trouble making ends meet.

The trade union movement had almost no hold on these layers of workers, who, in turn, watched with scepticism (at best) the ritual "struggles" organised by the union confederations, without any result. For a divorced mother whose survival depends on a precarious job in which she is brutally exploited, trade unions’ "days of action" with no long-term plan and no effect are of no interest. These are a luxury she cannot afford. And that goes for millions of workers.

It is precisely these poor employees who alongside pensioners, the unemployed, small traders, etc. form the backbone of the movement of yellow vests. Their combativeness is commensurate with the amount of anger and frustration they have accumulated. Police and judicial repression, of unprecedented brutality, do not make them falter. On the contrary, it reinforces their determination to get rid of a government that is based only on the "democratic" virtues of truncheons, tear gas, flash-balls and arbitrary arrests.

A point of no return has been crossed by the powers that be which, unceasingly mutilate and imprison the populace. Who still supports Macron and his clique? The big bourgeoisie and its media cronies (though not without apprehension), as well as a few thousand "red scarves" who embarrassed themselves in the streets of Paris, on 27 January. That is about it. Since May 68, never has a French government been so weak and discredited. 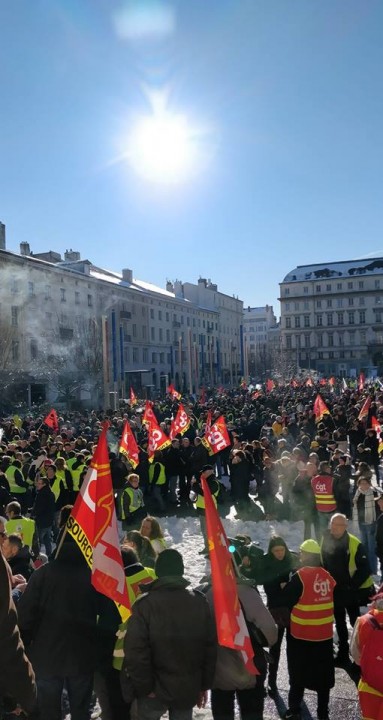 The yellow vests' combativeness is commensurate with the amount of anger and frustration they have accumulated / Image: fair use

Everyone understood that the "big debate" organised by the government has the sole purpose of weakening the mobilisations on the streets and at roundabouts. The experience of the last 12 weeks has convinced the vast majority of yellow vests that it is necessary to carry on the fight within workplaces themselves, in the form of massive and unlimited strikes. The movement has seized on a day of action scheduled by the CGT, February 5, as the starting point of an "unlimited general strike".

This is the key to victory. The government is determined to "hold" against Saturday's protests. Macron expects fatigue and exhaustion. And it is clear that, if the movement does not move forward, it will fall back. On the other hand, a vast movement of unlimited strikes would deal a fatal blow to the government. Macron would be obliged, at a minimum, to dissolve the National Assembly, in the hope of defusing the development of a revolutionary crisis.

It is impossible to predict what will happen on 5 February and the following days. France is the country of June ‘36 and May ‘68: two general strikes that erupted from below, against the will of the union leadership. Anything is possible. The course of events depends in particular on the initiatives taken, in the field, by the most combative union activists, in connection with the yellow vests. However, it must be admitted that the passivity of the confederal leadership of the CGT (to say nothing of the other unions) is a major obstacle to the organisation of a powerful movement of unlimited strikes.

There is no doubt that many workers support the idea of ​​a general strike against the Macron government. But they know that it is not enough for one sector to go on strike and wait for others to follow. Dockers, refinery workers and railway workers – among others – have had bitter experiences in 2010, 2016 and 2017. The confederal leaders of the unions did not lift a finger to extend the strike to other sectors. Isolated, these strikes failed. With this experience in mind, many workers look to trade union assemblies and say: "These people do not seem ready to extend and generalise a strike movement. If we start, we risk being isolated.” This is a serious obstacle. But it's an obstacle relative to the pressure from the rank and file. And so, sooner or later, the leadership will yield.

The dissolution of the National Assembly would be a first victory. But then what? What kind of government do we need? The yellow vests say, "Power to the people!" We agree! But what does that mean, concretely? For the "power of the people" to be real and effective, this presupposes the transfer of economic and political power to the hands of the workers, that is to say, those who produce all the wealth. This means the expropriation of the parasites who hold the main levers of the economy: the banks, industry, energy, transport, pharmaceuticals, the media, etc. 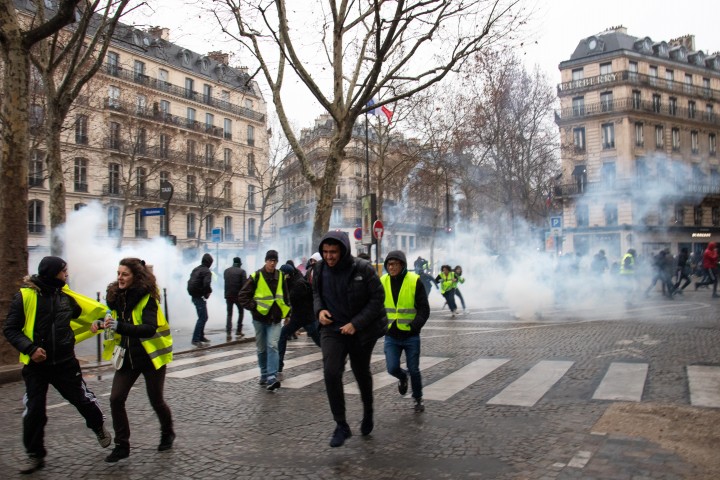 The yellow vests are fighting to get rid of a government that is based on the "democratic" virtues of truncheons, tear gas, flash-balls and arbitrary arrests / Image: Olivier Ortelpa

All of these large companies must be nationalised and placed under the democratic control of employees. Then, as part of a democratic planning of production, it will be possible to satisfy the needs of the majority – instead of satisfying the thirst for profits of a small minority, as is the case today. At the same time, it will be possible to guarantee much better conditions for small traders, artisans and farmers, who are presently crushed by big capital.

At this stage, the movement of the yellow vests has not raised these questions. This is not surprising, since the left and the labour movement have themselves evacuated this issue from their speeches and programmes for decades. It is time for this to change. France Insoumise and the CGT, in particular, that Macron works for the capitalist class. They should strive to link the struggle of the yellow vests with the objective of genuine workers' government: that is to say, a revolutionary, socialist transformation of society. No doubt this would be a powerful battle cry for millions of young people and workers.