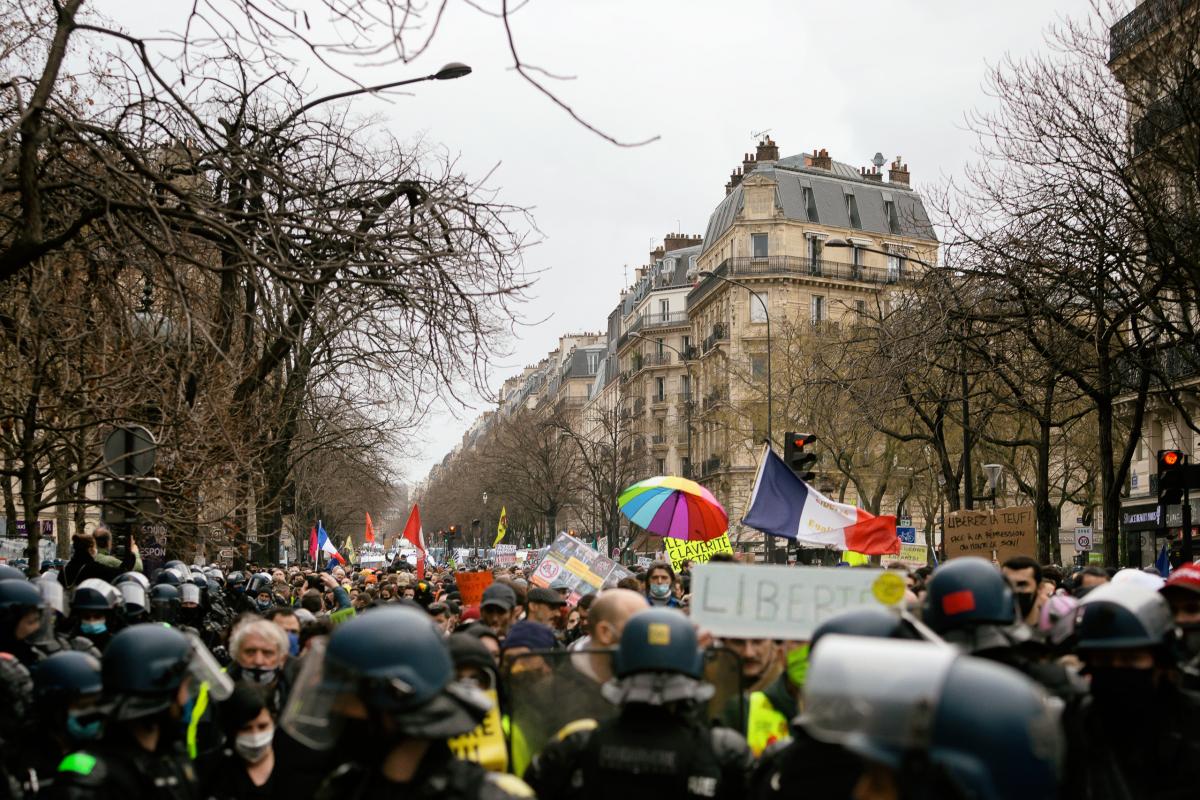 On 30 January, big demonstrations against the Global Security Bill, the so-called Separatism Bill and for the reopening of cultural institutions took place in Paris, and all over France. These demonstrations were led by thousands of youth, who are increasingly radicalised given the seemingly endless pandemic (which means campuses are closed), and are determined to oppose the rotten Macron government.

Macron is faced with growing resentment and anger. Already discredited following years of protests by the gilets jaunes and striking workers (which were brutally repressed by the police), this hated government of the rich has badly mishandled the pandemic, its economic impact and the recent vaccine roll-out. All of this is deepening the frustration of the masses in general, and young people in particular, who are seeing their futures destroyed before their eyes.

In this context, Macron is doing everything he can to strengthen the repressive state apparatus, and divert attention from his failures. It is in this context that the outrageous, anti-democratic Global Security Bill – proposed by a group of MPs from LREM (La République En Marche – president Macron’s party) – has passed without amendments at the National Assembly.

Most controversial are articles 22 and 24. The former authorises the deployment of drones to monitor public spaces, and the latter seeks to forbid the public from filming "the image of the face or any other element of identification of an official of the national police or of a soldier of the national gendarmerie when acting within the framework of 'a police operation' and when this dissemination is made 'with the aim of harming his physical or mental integrity'”.

In other words: it seeks to prevent citizens from recording acts of violence by the police, like the recent beating of a black music producer in his own studio. The maximum offence for breaking this new law would be €45,000 fine and one year in prison. This same bill also allows police officers to keep their guns at all times, even when not in service.

Despite the large and numerous demonstrations in France this past Autumn, the government has decided not to withdraw the bill. In part, this has been due to the passive response of the trade union leaders, who have failed to mobilise a proper, working-class resistance to these reactionary laws, despite ample opposition from below. 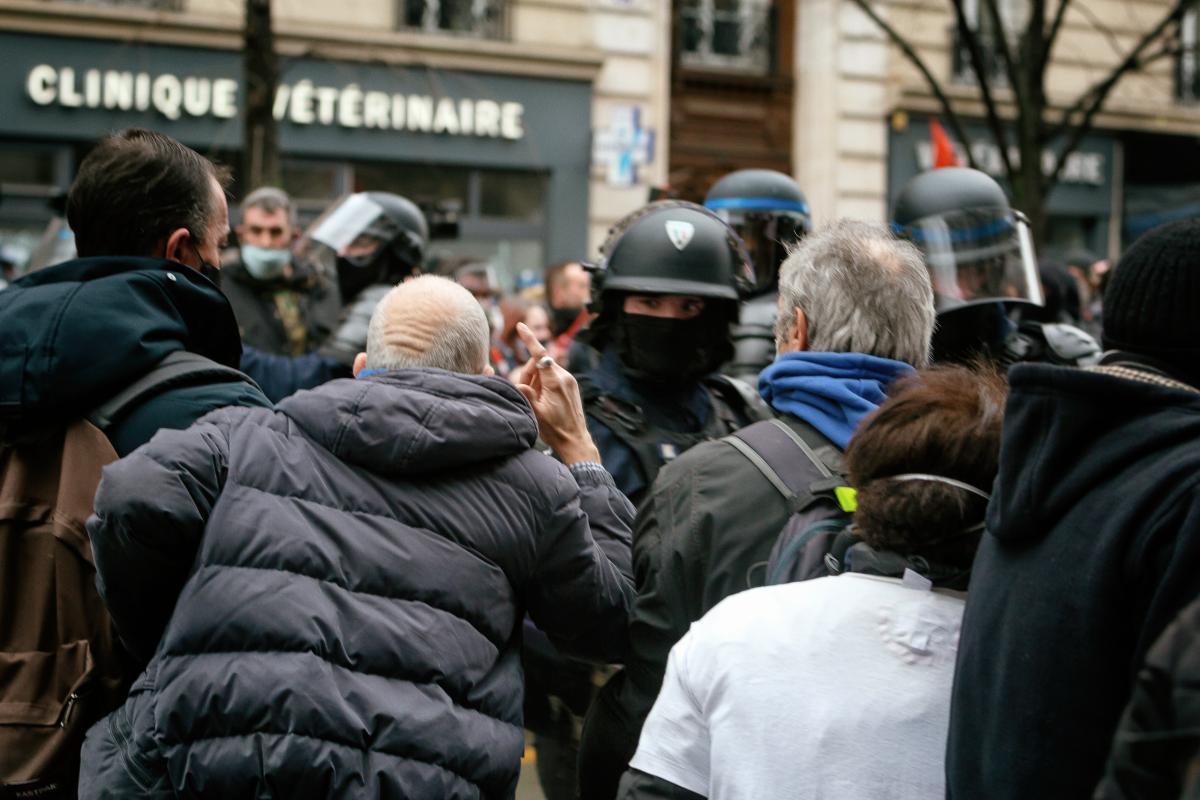 Article 24 about the filming of police officers has been reiterated in the Separatism Bill, which is supposed to reaffirm the Republican principles of France, but in reality is an attempt by Macron to divert attention from his failures by portraying Muslims as enemies of the Republic. The sentences attached to this law are even more considerable.

Saturday’s demonstration was also a cry for help from the cultural and artistic sectors. Theatres, cinemas, museums and concert halls were allowed to open for a short period of time under strict health-and-safety rules only to be shut down a few weeks later. Artists and cultural workers have barely been able to survive the first two lockdowns, with little financial help from the government.

Although the demonstration went by without too many problems, police violence in France has become a common feature at such events, especially following movements like the gilets jaunes, BLM, Student Deprivation and Freedom Protests. Moreover, in addition to physical violence preventing people from protesting safely, the government is using legalistic means to quash dissent, such as adding activists to the list of people who may be a ‘threat to public security’.

The UN, the European Parliament and the Commissioner for Human Rights of the Council of Europe have expressed ‘concern’ about the systematic and unjustified violence in France. Which is ironic since many of the vehicles and hardware used to suppress these protests were loaned to Macron by the EU! 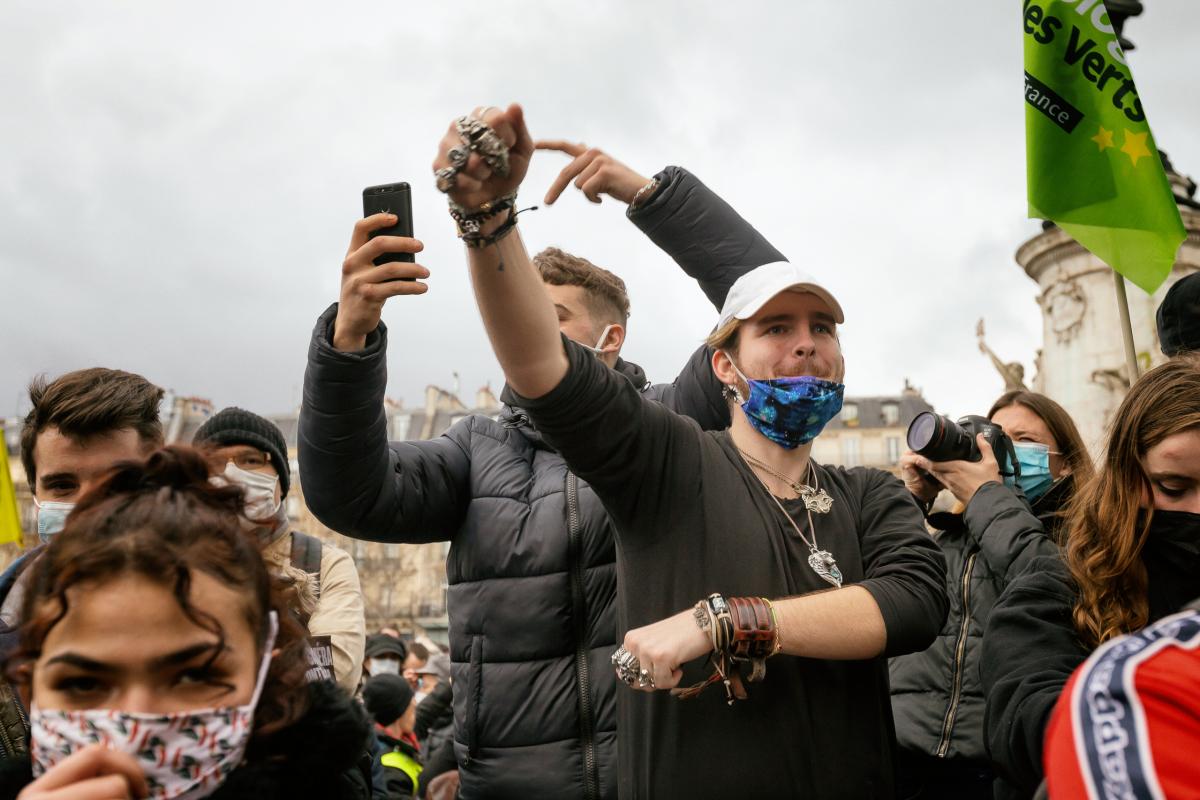 Far from cowing the masses, the whip of repression has only driven them forward / Image: Martin Noda / phototheque rouge / Hans Lucas

But notwithstanding these crocodile tears from bourgeois institutions, far from cowing the masses, the whip of repression has only driven them forward, hence the succession of radical protests we have seen in the last few years. Only the lamentable role of the trade union leaders has prevented the French masses from toppling Macron already.

In an already oppressive and authoritarian climate, the French government is using the pandemic crisis to continue its repressive regime. It is in this context of distrust and rage that vaccine confidence among French people is so low, while measures to suppress the pandemic, like an imposed curfew from 6pm to 6am and advice not to speak on the Metro, are met with indignation.

By tightening repression and relying on divide-and-rule, Macron is playing a dangerous game. He will only intensify the polarisation of French society, and motivate further opposition to his hated regime.