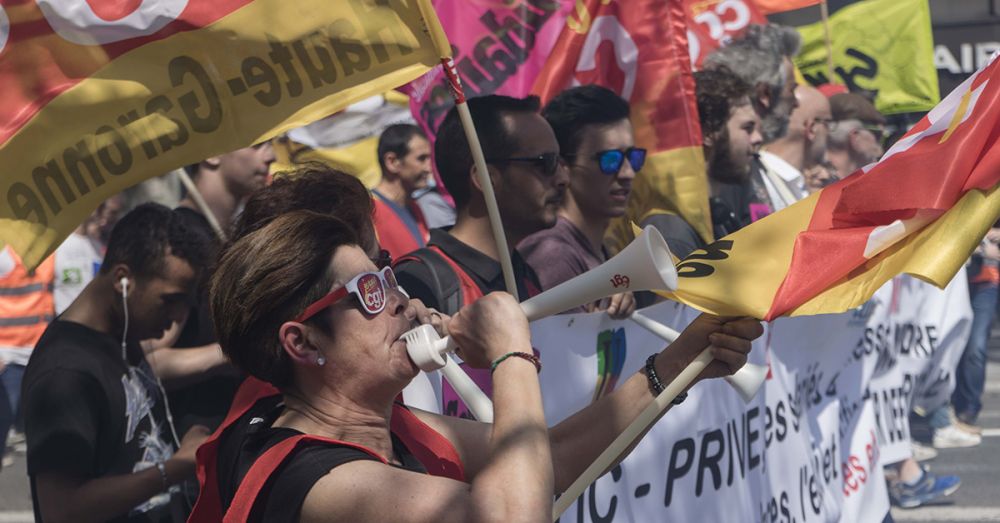 The latest editorial from Révolution (the French publication of the IMT) argues that Macron’s attempt to introduce a ‘universal pension scheme’ (in reality, a massive attack on pensions) must be resisted by organising a general strike. An upcoming, indefinite transport workers’ strike on 5 December presents a point of convergence for all the forces of the working class, which must be mobilised over the next two months to fight, not only to defeat this pension counter-reform, but for the end of Macron’s reactionary government.

The proposed counter-reform to pensions would have the effect of either increasing the number of years worked or reducing the amount received after retirement. In addition, the point-credit system would allow future governments to worsen the situation without having to go through a new "reform" process. All that would be needed is a simple calculation, based on manipulable economic and demographic data.

Macron wants to demolish the current pensions system. Having had its fingers burned by the yellow vests, the government will deploy various manoeuvres to try to defuse or limit social protest as far as possible. Macron announced a new "grand debate" (i.e. a presidential monologue), following up from the one that ran from January to March 2019. It is unlikely that it will enjoy any more success than the last, except of course with journalists from the mainstream media, who will be able to indulge in their favourite sport: celebrating the "expertise" and “political wiles” of the head of state. 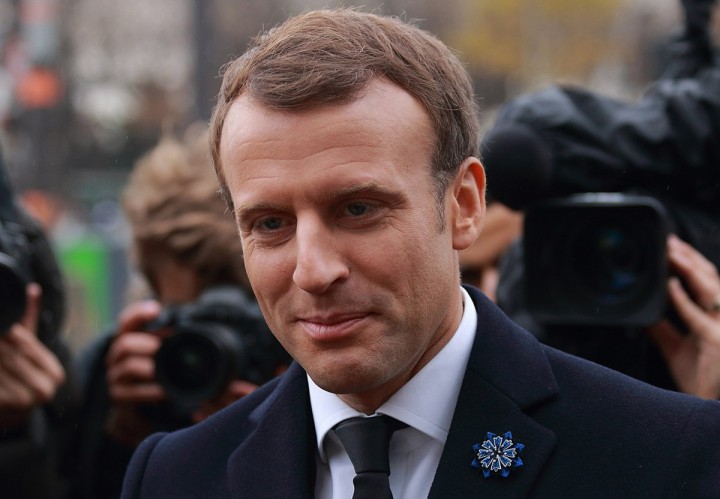 Parallel to this pseudo-debate, whose conclusions have already been written, the government will continue its "consultations" with the leaders of the labour movement. Let's be clear: these meetings with the confederal directorates will not force the government back by one millimetre. They have on purpose: to present a facade of "social democracy", and hopefully weaken the challenge from the organised working class. By participating in this charade, the union leaders give substance to this farce.

How many times in the past has a puppet from the CFDT triumphantly announced that his union was giving up on any mobilisation because it had "obtained" a "major concession" from the government? On examination, such "concessions" – prepared well in advance by the government – are derisory in light of the initial counter-reform. In reality, these instances represent the capitulation of the CFDT. One would not be surprised if the confederal leadership plays the same pathetic game again this time.

The fight for pensions will not be won in the golden halls of the Elysée or Matignon. It will be won in the streets and through strike action. And given the determination of the government and bosses to pass this counter-reform, it will take a social movement of exceptional power to prevent it.

Trade union leaders – with the CGT in the lead – must turn their backs on "consultations" and face towards the workers. They must tell them the truth: only a movement of renewable strikes, embracing a growing number of economic sectors, will defeat the government. A vast campaign of agitation, in the workplaces and the civil service, should be organised to put such a movement on the agenda. Students and youth should be placed on a war footing. 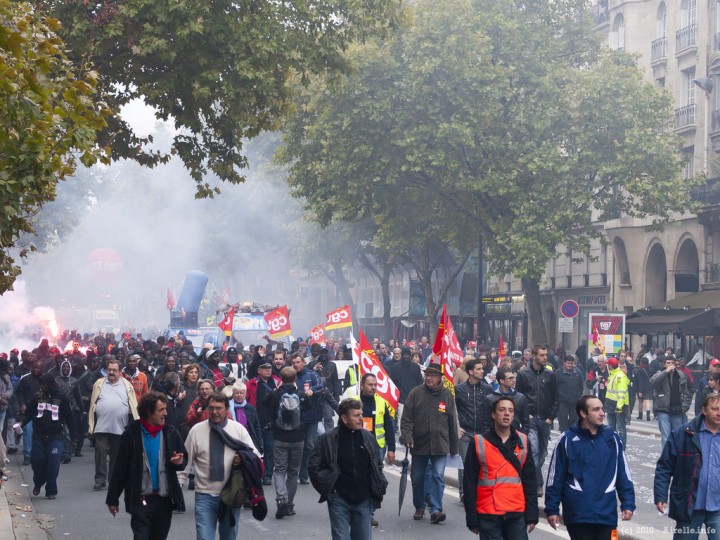 The rank and file of the labour movement must build for struggle from below and pressure their leadership for bold action, rather than compromise with the Macron government / Image: Flickr, Rafael Lopez

That's what union leaders should do. However, the experience of the last 20 years has shown that the confederal directorates – the CGT included – are not prepared to organise a struggle of this nature and scale. At best, they organise "days of action" that are useless even when they are massive, because they do not frighten the government and do not undermine its determination to impose cuts. At worst, the union leadership openly capitulates from the outset, as the leaders of the CFDT have repeatedly done – and even those of the FO over the Labour Law in 2017.

Thus, union workers and activists must not wait passively for the confederal directorates to organise the fight. On the one hand, they must put strong and constant pressure on the union tops to take action. On the other hand, and above all, they must take the initiative at the grassroots level, in the workplaces and the different trade union structures, to launch a campaign of massive agitation for a movement of renewable strikes. Wherever possible, inter-professional general assemblies (as in the autumn of 2010) need to be organised. Coordinations for these, locally and nationally, must be elected to develop the agitation campaign and prepare for the strike. This work will also exert the most effective pressure on the confederal directorates.

The RATP strike on 5 December

We are not saying that the organisation of a general strike will be easy. Only by starting to organise will we discover if the workers are ready for this tactic. But we are not starting from nothing. The movement of the yellow vests has shown how much anger and combativeness is bubbling under the surface of society. The strikes by the emergency services and firefighters underline the same thing. Finally, the powerful strike of transport workers from the RATP on 13 September sent a strong signal to all layers of the working class: "this is what we can and must do! "

On the strength of this success, the RATP unions announced an indefinite strike from 5 December. The SNCF unions – among others – have rallied to this call. Thus, 5 December could represent a point of convergence for all the workers’ forces (if they are ready by then) to embark on a general strike. This leaves two months to organise the mobilisation on the ground, and can mark the starting point of a new "December ‘95".

Of course, the government will seek to sow division: it will propose to negotiate with the union leaders of certain sectors (RATP and truck drivers, for example) to demobilise them – and thus weaken the rest of our camp. It would not be the first time a government has done this, nor that union leaders have willingly acquiesced. Initiatives must be taken at all levels against this attempt to fragment the struggle. This is one of the roles that interprofessional assemblies can play.

There is another important lever of mobilisation: the political perspective it opens. The general secretary of the CGT, Philippe Martinez, declared that "another pension reform is possible". He is obviously talking about a progressive reform, which for example would amount to 37.5 years of contributions and 60 years for the legal age of retirement, as before 1993. Indeed, "it is possible!" But not under the Macron government. The latter would rather burn in hell – or, before that, dissolve the National Assembly – than implement this type of reform. So if we want it to be implemented, we must bring down this government. 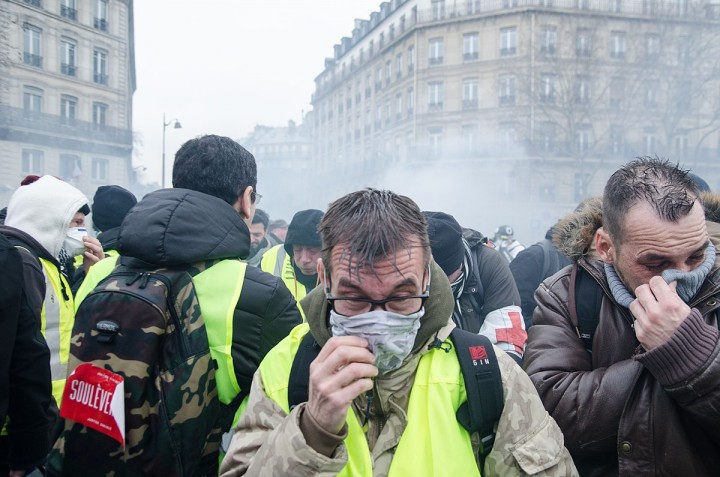 "For dissolution of the National Assembly!" / Image: kriss toff

We must revive the excellent slogan of the gilets jaunes: "Dissolution of the National Assembly!” Of course, this must be accompanied by a general programme of progressive measures, such as the repeal of labour laws and other counter-reforms enacted over the last 30 years; the renationalisation of privatised enterprises; the nationalisation of all Seveso-classified industries; a massive hiring of civil servants, the repeal of racist laws, etc. Bolstered by the "radical left" and union activists, a programme of this kind would give a huge boost to the mobilisation, as it would open a perspective not only to force a retreat, but also to end Macron’s reactionary government.