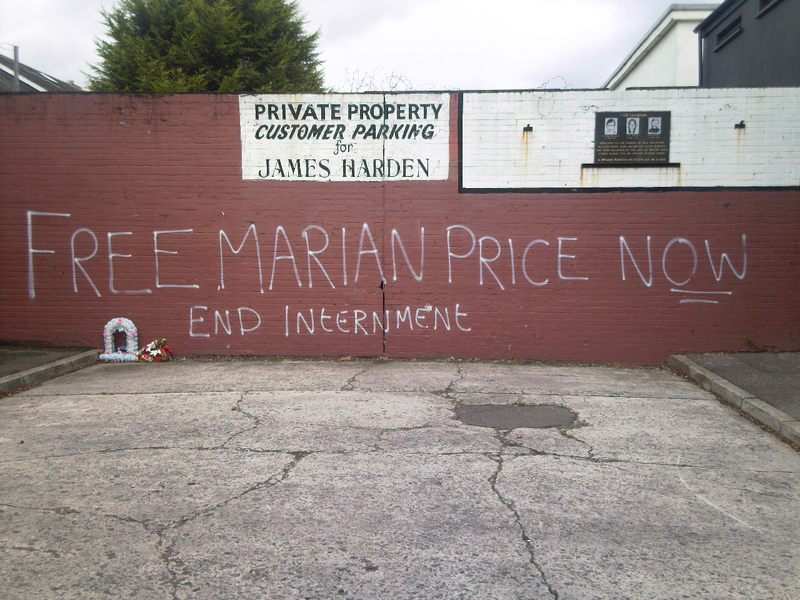 The decision of the Secretary Of State to revoke Marian Price’s release from prison has been met with widespread opposition from the Republican movement. The justification given was that the threat that she poses has “significantly increased” and that she had been encouraging support for an illegal organisation based on her involvement in an Easter comm 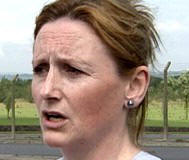 Marian Price The specific reason, most likely, was the visit of the British Queen who was due to visit Ireland shortly afterwards and the security clampdown associated with it. Marian is a leading figure in the 32 County Sovereignty Movement.

As for Marian herself, she was very active in the initial civil rights movement. She participated on the Burntollet march to Derry in 1969 and sees herself as a socialist. She is also highly regarded among republicans and stood firmly against the Adams faction. Perhaps that represents another reason for her arrest for "holding up a piece of paper". So the issue of Marian’s return to jail is also tied in to the ongoing struggle between Sinn Féin and the groups that have split from it over the years since the change in direction of the Adams/McGuinness leadership.

The case has been highlighted as a return to the days of internment without trial during the troubles. Marian Price herself suffered force feeding in prison in the 1970s after going on hunger strike to demand repatriation to the North of Ireland after she was jailed in Britain.

The reaction of the police, the courts and the British Government to the student movement in Britain and Ireland and the recent riots in Britain, demonstrate that the state is prepared to use repressive methods against wide layers of the working class and the youth.

Throughout the world every day there are instances of workers’ representatives, trade unionist sand active workers being assassinated, tortured, jailed and victimised for the work they do on behalf of the class. In many cases the repressive forces have been trained by the British establishment and source their arms from Britain. So no one should doubt the extent that the ruling class will go to in order to protect their rule

The workers’ movement must oppose all state repression; any act of repression against an individual is really an attack on the whole of the working class. Sooner or later it will be the workers’ movement itself that comes under attack. This was the experience of the British miners’ strike for example. Under conditions of severe economic crisis and industrial struggle it will be harder and harder for the ruling class to rule in the old way, whether south of the border, in Britain or in the North itself. It is likely that the working class will be faced with confronting both the PSNI and the Gardai.

Marxists have consistently opposed individual terrorism on the grounds that it doesn’t work, because it does not involve the mass of workers in the struggle, but also for the practical reason that it gives the state the excuse to pile up repressive measures that can be used also against the working class. The British state developed a whole string of powers and repressive methods in the North throughout the 1970s and 1980s and it wasn’t slow in using them as this article from 1978 illustrates:

“A British Foreign Office Minister admitted in the House of Commons in January that 38 cases of ‘alleged’ breaches of Human Rights by Britain had been referred to the British Government for ‘observations’. These included Irish prisoners in English prisons. In two of the cases it is claimed by solicitors that [the methods] used were similar to those practiced by the Greek Military Junta some years ago!

“In 1971 Article 3 of the European Convention of Human Rights was violated in the most brutal manner, in two separate groups of incidents. These were – Fourteen men between 12th August and 2nd October 1971 were hooded , deprived of food, drink, sleep and made to stand against the wall over a period of six days, subjected to ‘white’ noise and beaten: Between 300 and 400 men were given ‘inhuman treatment’ in the Palace Barracks Hollywood between September 1971 and March 1972.” (Bill Webster, Militant Irish Monthly, March 1978)

The point is that State repression is a class issue. The vast majority of those interned, tortured and subjected to “in depth interrogation” were young working class men. But, more broadly than that, the state used many of their newly acquired powers against the Labour and trade union movement, especially the Prevention of Terrorism Act which was regularly used against Trade Union Activists in the North.

Following the 1998 Good Friday Agreement and the establishment of the peace process, the direct British Military presence in the North was scaled down. But in the background the state apparatus is very much intact and functioning. The laws remain on the statute book and all of their “special powers” remain in reserve to be wheeled out when they are required. The British state is a highly experienced and heavily armed body of men; 40 years of “armed struggle” far from weakening the hold of the British State in the North have tended to strengthen it.

Above all this illustrates the fact that it takes more to get rid of the British State Apparatus than a campaign of individual terrorism. As Frederick Engels himself pointed out:

"The time of surprise attacks, of revolutions carried through by small conscious minorities at the head of masses lacking consciousness is past. Where it is a question of a complete transformation of the social organisation, the masses themselves must also be in on it, must themselves already have grasped what is at stake, what they are fighting for, body and soul. The history of the last fifty years has taught us that. But in order that the masses may understand what is to be done, long, persistent work is required, and it is just this work that we are now pursuing, and with a success which drives the enemy to despair." (F. Engels, Introduction to Karl Marx’s The Class Struggles in France 1848 to 1850, in K. Marx and F. Engels’ Collected Works, Vol. 27, p. 520.)

The working class has enormous potential power. It represents potentially the strongest force in society. The ruling class are very aware of this, which is why they make strenuous efforts to manipulate the Labour movement and especially its leaders. To win the mass of the working class to a socialist programme requires a patient orientation to the organised working class and the youth. Commenting on this Alan Woods explained in his book Reformism and Revolution recently:

“What is important to grasp here is Engels’ insistence on the need for the revolutionary party to win the masses, as the prior condition to carrying out the revolutionary transformation of society. This requires a more or less lengthy preparatory period of patient propaganda, agitation and organisation, utilising all kinds of work, including trade union and parliamentary work, in order to win over the widest layers of the working class. This is a subject we shall return to.”

Here is what James Connolly said on the issue:

“An Irish Republic, the only purely political change in Ireland worth crossing the street for, will never be realised except by a revolutionary party that proceeds upon the premise that the capitalist and the landlord classes in town and country in Ireland are criminal accomplices with the British government, in the enslavement and subjection of the nation. Such a revolutionary party must be socialist, and from socialism alone can the salvation of Ireland come.” (James Connolly, The Harp, March 1909)

The Bolsheviks suffered state repression throughout the whole of the period leading up to the 1917 revolution. The state was able to infiltrate the movement to a high level during large parts of that time. However, they were able to overcome this obstacle by a political struggle, and a clear orientation to the working class.

But it is insufficient to simply raise the red flag and expect workers and young people to flock to the banner. It is impossible within the context of the North to aspire to build a Marxist tendency without engaging with the political issues of the day, but more fundamentally with the major political issues, especially the national question and the question of the border and the position of the protestant working class. Above all, however, is the question of the role of the working class as the one force that can lead a successful Socialist Revolution on the island of Ireland.

In relation to the armed campaign of the Real IRA and other groupings, Marxists are opposed to such methods as they have prospect whatsoever of success and they are a diversion from the task of building an opposition to the impositions of the Tories and of the Executive. Rather than bringing closer the prospect of a United Ireland they simply serve to actually strengthen the hand of British imperialism. Thousands of workers face unemployment and tens of thousands will see the services they depend on attacked over the next four years. And it is at the head of the inevitable class struggle that is developing throughout the whole of Ireland that Marxists must place themselves.

Ultimately there is no way out of the cul de sac in the North, except through the Socialist Revolution. Internment and state repression stands in the way of that objective. That’s why we support the demand for the immediate release of Marian Price.