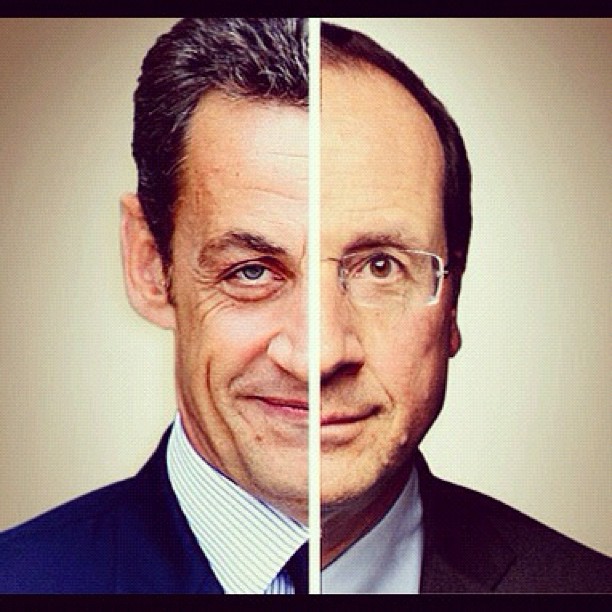 The results of the first round of the presidential elections in France mean that the second round will be fought out between Nicolas Sarkozy and the Socialist Party candidate, François Hollande. Opinion polls consistently suggest that Hollande is most likely to win, although the very high score obtained by the Front National candidate in the first round, indicate that Sarkozy still has considerable reserves to draw upon for the second round. The main advantage Sarkozy has, apart from his own pugnacious and combative attitude, is the pro-capitalist character of the Socialist Party programme, which could lead to a demobilisation of left voters.

The candidate of the Front de Gauche, Jean-Luc Mélenchon, came out of the first round with 11,1%. This is less than the polls suggested, but still represents a sharp increase in support for the left. In 2007, the PCF candidate, Marie-George Buffet, won only 1,93% of the vote. This remarkable result reflects the political radicalisation of a layer of the French working class, bearing in mind that many voters who supported Mélenchon nonetheless voted Hollande, having fallen for the fallacious argument of the vote utile (useful vote). The Mélenchon campaign marks a turning point in recent political history in France. Mass meetings on a scale have never been seen in France since the build-up to the historic victory of François Mitterrand in 1981. The campaign mobilised the energy of tens of thousands of militants involved in the PCF, the Parti de Gauche, and the unions, and particularly, in this latter category, of the CGT. The personal role of Mélenchon was undoubtedly of decisive importance. In the same circumstances, another candidate would not have had the same success. Mélenchon led a vigorous and militant campaign in defence of the interests of the working class. His speeches have inspired and enthused millions of workers. Undoubtedly, this campaign will leave an imprint on the hearts and minds of working class activists during the struggles of the coming months and years.

On the right, the most important aspect of the election results was the very high score for the candidate of the Front National, Marine Le Pen. Over recent years, she has tried to steer away from the aggressive racism and extremely reactionary policies defended by her father when he was at the head of the party. She won 17,9% of the vote, which amounts to 6,421,773  voters, compared to 3,834,530 in 2007. The support for Le Pen is a symptom of the profound social and economic crisis which has had disastrous consequences for millions of people. Le Pen deliberately played upon racial themes, but based her campaign on hostility to the “elites” and the “system”. This, together with her nationalist opposition to the European Union, found an echo among wide layers of politically backward unemployed and workers, driven to desperation by the constant decline in their living standards and by the failures of previous left and right governments. The Front National has also gained support among small businessmen the middle layers of society generally. Over the last five years, the Sarkozy government has used racist policies and propaganda as a means of dividing workers among themselves, in order to deflect attention from the real causes of the crisis. This has contributed to the success of the Front National in the elections. 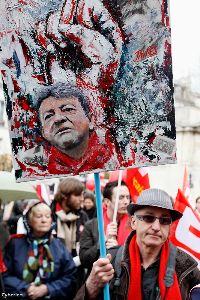 Mélenchon supporter at March 18 rally. Photo: Cyberien.The results of the first round show a polarization of society, against the background of deepening economic and social crisis. The workers movement is shifting to the left, while the extreme right is making headway in the opposite camp. French capitalism is in an impasse. Production is stagnant. Unemployment is rising. Factories and businesses are closing and moving abroad. The economic situation and the growing gulf between the classes are preparing the ground for tremendous events in the coming period, whatever the nominal character of the next government.

Sarkozy could well be defeated. But in the present situation, a “socialist” government would apply policies very close to those of Sarkozy himself. Mélenchon has called for a massive mobilisation of the unions and the left parties on May 1st, and for a massive turnout on May 6th in order to defeat Sarkozy. Such a defeat would be step forward in the struggle against capitalism. But only a step. The struggle will have to be continued on the trade union and on the political planes, whatever government is in power. Mélenchon has made it quite clear that the Front de Gauche will not enter a future socialist government, but will concentrate its efforts on “organising resistance to capitalism”. This is absolutely correct. The Front de Gauche programme should now be completed by the inclusion of decisive measures against capitalist interests. On the basis of a revolutionary policy, it will be able to further strengthen its position and play a central role in the fight for a socialist society.