France
Share
Tweet
Greg Oxley analyses the first round of the presidential elections in France, and explains the reasons for the generally poorer performance of the left candidates.

The defeat of the Left in the presidential elections of 2002 condemned the workers and youth of France to five years of attacks against working conditions, public services, pensions, social security, against the rights of the unemployed, with immigrant workers and their families being constantly stigmatised, provoked, and subjected to harassment and repression.

But the last five years have also seen tremendous struggles, on a scale never seen in France since the revolutionary events of 1968, such as the struggle to defend pensions, the mass movement which forced the withdrawal of the "first employment contract" (CPE) - which would have reduced young workers to the status of mere wage-slaves, without even the minimal rights enjoyed by other workers. The defeat of the European Constitution in the 2005 referendum and the landslide victory for the Socialist Party in the regional elections were a reflection of the profound social discontent within society, as were the mass riots which flared up in over 200 cities in reaction to police harassment, in November of the same year.

Now, at last, in the present presidential elections and in the legislative elections which will follow, millions of workers and youth have an opportunity to rid themselves of which had undoubtedly been the most reactionary government since the Vichy regime of the 1940's. The election campaign has taken place against a background of further strikes (three-week strike of Marseille dockers, six-week strike of Citroën carworkers at Aulnay-sous-Bois). It would not seem unreasonable, in the aftermath of the mass struggles that have taken place since 2002, to expect that the left parties would win both the presidential and the legislative elections. And yet, the results of the first round of the presidential elections are not particularly good for the left, in spite of the historically unprecedented turnout (84%).

Sarkozy, the candidate of the main capitalist party (the UMP) obtained the highest score of the 12 candidates in the first round with 31% of the vote. This takes him through to the second round in a more favourable position than Socialist Party candidate, Ségolène Royal, who got 26% of the vote. Sarkozy has adopted many of the ideas of the racist Front National, and has clearly attracted many FN voters as a result. Support for the FN has fallen from 16,9% in 2002 to 10,4%. A left victory in the decisive second round is still a possibility, but the votes cast in favour of the other candidates would appear to place Sarkozy in the lead.

The results for the 12 candidates are as follows :

The fundamental explanation for this result lies first and foremost in the lack of a clear socialist alternative to capitalism on the part of the left. The Socialist Party fought this election on the basis of the most openly pro-capitalist platform in the entire history of the party. Royal repeatedly brandished nationalist ideas such as love of the fatherland, of the national flag and anthem. To combat unemployment, she has proposed a scheme similar to that of the hated CPE. To combat delinquency, she has argued that young offenders should be interned under the supervision of the armed forces. Her program does not contain a single measure which would bring about a significant improvement in living standards. In a word, this was not a socialist campaign, but a campaign of reformism without reforms. 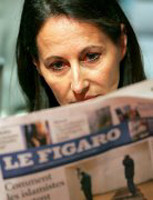 It was the failure of the Jospin government to challenge the power of the capitalists which prepared the way for the defeat of the left back in 2002. The impact of this defeat led to a crisis within the Socialist Party, and the emergence of what could potentially have become a powerful left-wing opposition. The collapse in the authority of the right wing was shown by the 42% internal vote against the policies of the leadership on the issue of the European referendum. However, the opportunist leaders of this opposition shamelessly capitulated to the right wing at the Le Mans party conference, in exchange for front-line positions and the promise of ministries in a future Socialist government. When the time came to elect the candidate for the presidential elections, Ségolène Royal - a representative of the most pro-capitalist wing of the party - won the position in the absence of any serious opposition from the left, and on the basis of a massive media campaign in her favour as the candidate "most likely to defeat Sarkozy". Thus, the right-wing of the party, in spite of having been responsible for the defeat of the left in 2002, managed to recover full control of the party apparatus.

The campaign was openly sabotaged by a section of the Socialist Party right wing, which published declarations in support of the candidate of the capitalist UDF party, François Bayrou. This so-called "Spartacus Group" of conspirators - most of them wish to remain anonymous - had the same position as other leading figures in the Socialist Party, such as Rocard and Kouchner, who have called for a coalition government of the Socialist Party and the UDF. The UDF has supported practically all the reactionary policies of the present UMP government. Another leading Socialist Party member, who was the economic advisor of Ségolène Royal, has openly passed over to Sarkozy, playing an active part in the campaign to get him elected.

For the Communist Party, this further fall in support since 2002 is an illustration of the disastrous consequences of the abandonment of even a semblance of socialist policies, which the leadership of the party have replaced by the confused and insipid language of petit-bourgeois "alternative" politics: additional taxes and fines for bad capitalists, premiums and bonuses for good ones, so-called equitable trading, sustainable development, and so on. The party program even claims that capitalism could completely eradicate unemployment and poverty by means of mere adjustments in taxation and public spending practices.

Clearly, workers and youth are not convinced that this "anti-liberal" gobbledegook can be taken seriously, especially after the approval, by the CP leadership, of the massive privatisation program carried out by the Socialist-Communist government of 1997-2002. This new setback will undoubtedly serve to reinforce the position of the small but growing Marxist wing of the CP, around the monthly paper La Riposte. This tendency actively participated in the CP election campaign, while explaining the need to break with the timid policies of "anti-liberal" reformism and putting forward a clear socialist program, both publicly and within the party.