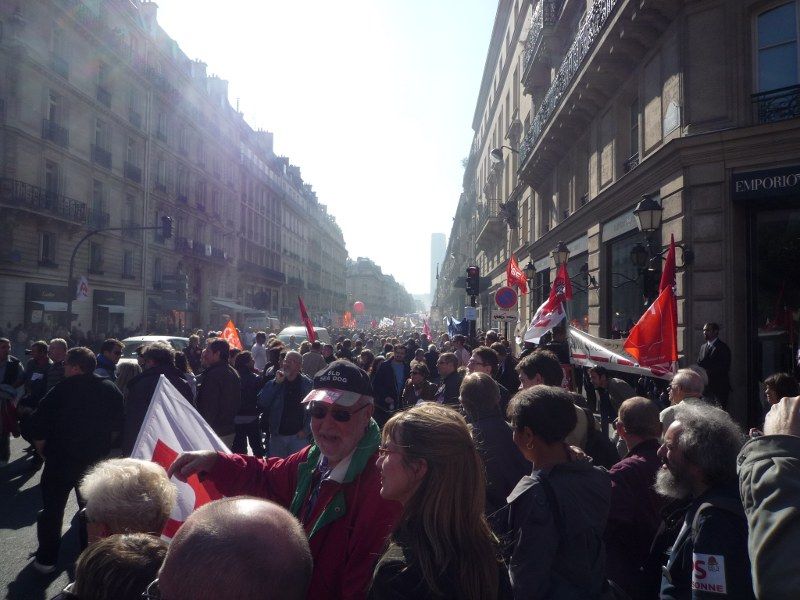 The magnificent movement of the French workers is an inspiration to the workers of all Europe. It shows the real face of the French working class. Yesterday strikers were continuing their action for a second day running, following an impressive day of action on Tuesday.

Tuesday saw the biggest strikes and demonstrations, so far, in the campaign of the French unions to increase pressure on the government over its pension reform plans. Some unions say they will continue their stoppages indefinitely. Rail services are still restricted, causing congestion and delays.

Strikes forced the closure of all six of the Total oil group's refineries, threatening fuel shortages. Eleven out of the 12 refineries in France have now been affected by strike action. In the oil terminal port of Fos-Lavera near Marseilles, the strike is now in its eighteenth day, leaving oil tankers stranded at sea unable to unload their cargoes. 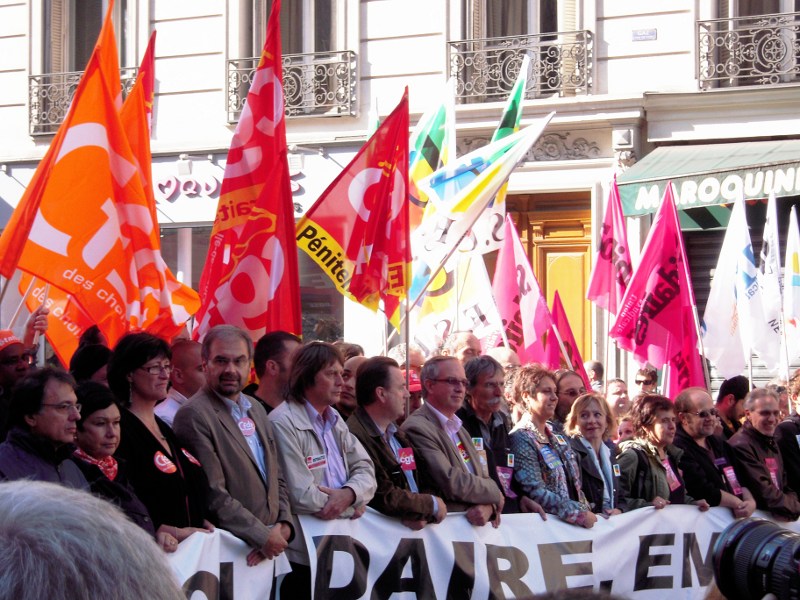 Paris. Photo: Parti Socialiste Nationally, fewer than half of local and inter-city trains were running, according to the SNCF national rail company. The Eiffel Tower was closed to tourists on Tuesday after workers walked out. Airports have also been seriously affected by strike action as have hundreds of schools, with general assemblies being held in several universities to decide on what action they should take. 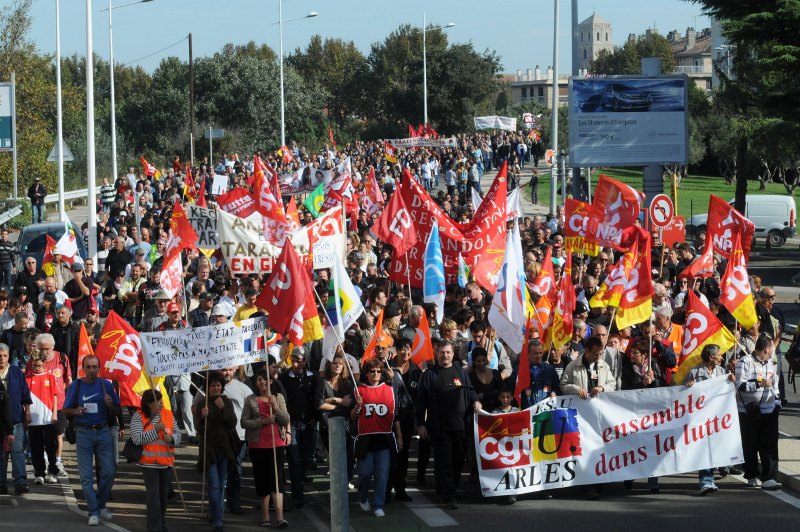 According to the unions 3.5million people took to the streets all over France in the general strike on Tuesday. Here in Toulouse, according to the CGT, 145,000 people participated in the biggest demonstration for years, while in Paris the figure was 350,000.

Communist Party and CGT member Hubert Prévaud underlined the massive scale of the demonstration that took place in Toulouse – one of the biggest in the history of the city – and also the fighting spirit of the demonstrators:

“One might have thought that after so many days of action, the workers would have become tired. But, on the contrary, they seem to be keener than ever. The general mood is one of deep anger. The workers say that the movement must now be taken onto a higher plane in order to defeat the government.” 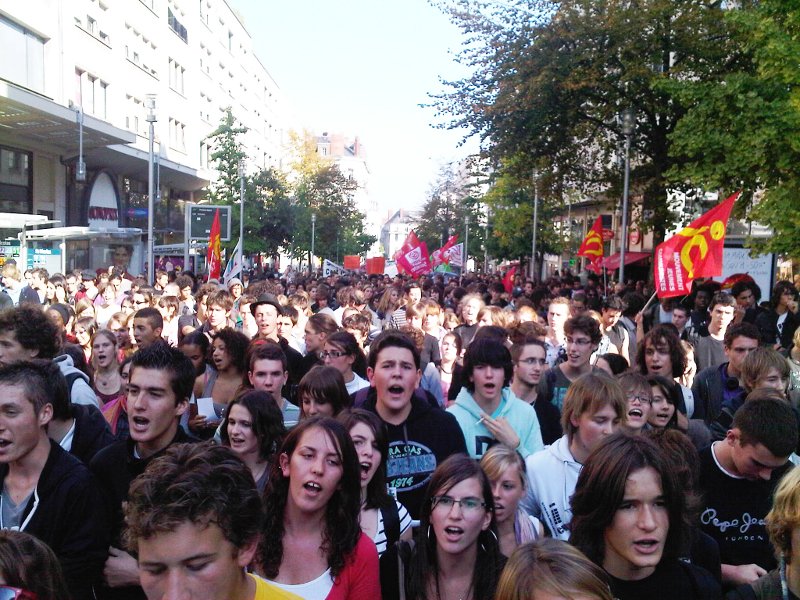 Even in small towns there have been sizeable demonstrations. In the small town of Niort in the Department of Deux-Sèvres, 15,000 took to the streets, out of a total population of 60,000. This means that one quarter of the population was on the demonstration.

The general picture is one of profound social ferment and a rising tide of radicalisation which it will not be easy to quell. The mood on the demonstrations was one of confidence; cheerful, happy that the workers were on the streets, united and fighting back. However, there is an increasingly critical attitude towards the leadership. One worker in Niort told me:

“The demonstration was marvellous, but I cannot understand why there was no meeting at the end, no speeches of the leaders, no discussion about where we go from here. The people just dispersed and went home and the whole thing seemed to just fizzle out.”

Communist Party activist Joseph Coutant spoke to me about the mood of the demonstrators in Niort:

“The people were very happy. But under the surface there is a mood of anger. It has not yet reached boiling point, but it is there: a kind of simmering, contained anger that can explode at any time.” 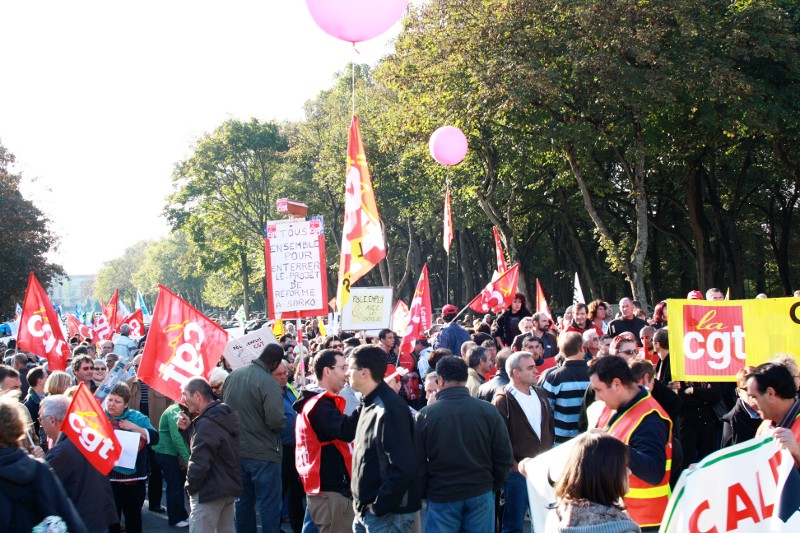 Bourges. Photo: PCF Bourges. This was the fourth day of action since the beginning of September and each day of action has shown an increased participation compared to the previous one, rising from 2 million to 3.5 million, and a new day of action is being called for Saturday 16th.

The immediate issue of the protests is President Nicolas Sarkozy's plans to raise the minimum retirement age from 60 to 62, and to delay a full state pension from 65 to 67. The lower house of parliament has approved the reforms, which are now working their way through the Senate. 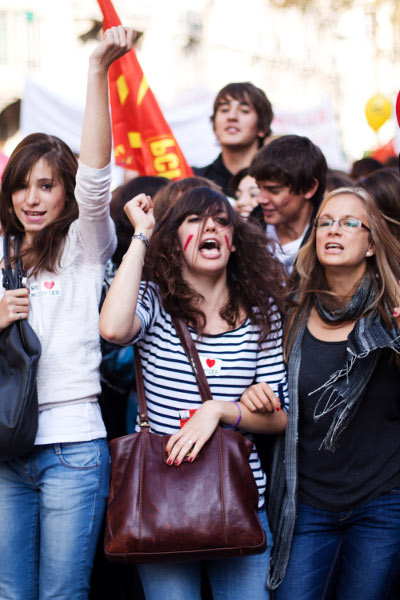 Grenoble. Photo: hugodemaziere The government says the current pension arrangements are not sustainable and need to be reformed. Yesterday Sarkozy told a meeting of MPs that he would “go no further” in terms of concessions, according to the AFP news agency.

On the Paris trains, the press reports that there was frustration among commuters but sympathy for the strikers. “It's a bit annoying for those who work. But I completely understand their point,” Isma Belmiloud told Reuters. Eric Floresse said his commute had been disrupted, but for a good cause. “I think the reform is unjust, there are already lots of older people who are unemployed.”

These comments reported in the press are a faithful reflection of French public opinion. A whole series of opinion polls have consistently shown that an astonishing 70 percent of the public are in favour of the actions called by the unions. 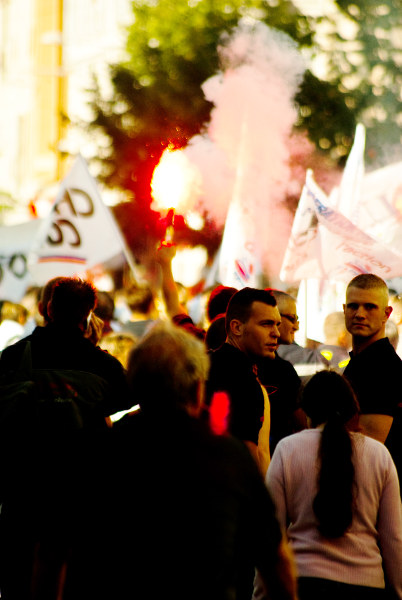 Nice. Photo: Dalmas Gaelle That means that all the living forces of the French nation are behind the workers. Even more significant is the fact that no fewer than 60 percent are in favour of escalating the protests:

A number of unions - particularly in the transport sector - say their strikes are open-ended, and will hold daily ballots on whether to extend their action for another 24 hours.

The mood of growing radicalisation is evident. In the meetings where I have spoken in the last few days, organized by La Riposte, the organ of the Marxist network in the Communist Party, one could see an enormous interest in the ideas of revolutionary Marxism, not only among the youth but also on the part of many older militants who are tired of the timid reformism of the leadership and who are seeking the genuine ideas of Communism. 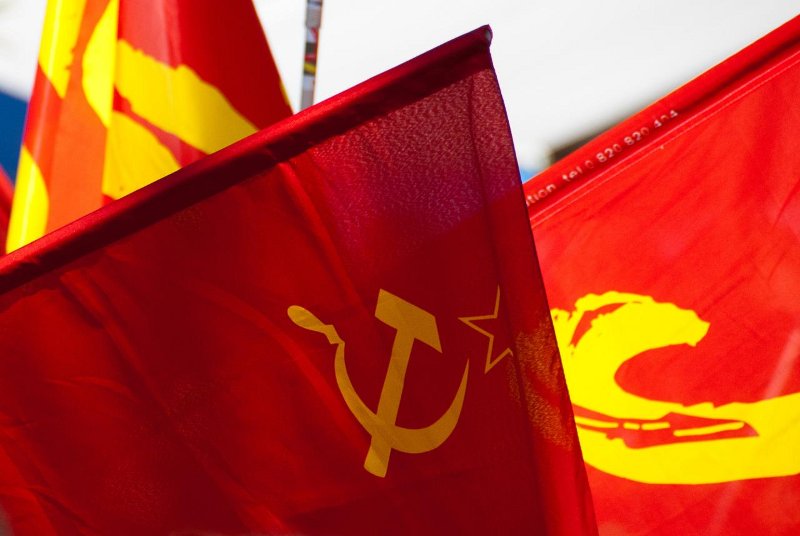 Photo: Olivier Combier Sarkozy has seriously miscalculated in picking a fight with the unions. He has forgotten that France is the land of revolution: the land of 1789-93, of 1848, of the Paris Commune, the general strike of 1936 and May 1968.

The more far-sighted representatives of the French ruling class can see the danger: Dominique de Villepin, a former prime minister, has warned that mass unemployment, falling living standards and the constant provocations of the Sarkozy government could provoke a new social revolution.

There is no doubt that the conditions are being prepared for a social explosion in France in the coming period. The French bourgeoisie cannot afford to permit the continuation of the concessions that were forced from them in the past. But the French workers are not prepared to remain with their arms folded while the social conquests of the last fifty years are destroyed.

The stage is therefore set for a period of intense class struggle in France. The French ruling class knows it will have a serious fight on its hands!