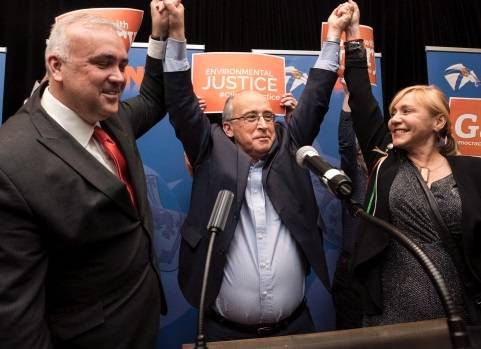 Burrill committed himself to the “elimination of poverty and income inequality” and in many ways mirrored the messaging from the campaign of Bernie Sanders in the United States. He railed against the “1%”, promised to raise the minimum wage to $15/hour and committed to eliminate tuition fees. This enthused party members and led to a surge in party membership and record voter turnout of 74.2 per cent. The election of Burrill represents an earthquake inside the NSNDP.

A rejection of Dexter

The provincial NDP government under Darrell Dexter, elected in 2009, committed to balancing the provinces books on the backs of workers and youth. According to the Canadian Centre for Policy Alternatives, the $772-million worth of cuts announced in the government’s 2012 budget would amount to over 10,000 public sector jobs lost. In addition, the Dexter government froze hospital budgets across the province and rescinded the right-to-strike of paramedics in their dispute with Emergency Medical Care, the private company that operates the province’s ambulance services.

The NDP government under Dexter lifted a three year tuition freeze in 2012 and instead raised tuition by 5 per cent. Nova Scotia students pay some of the highest tuition fees in the country: more than double what is paid in Newfoundland and Labrador. This is in spite of the fact that a poll commissioned by the Canadian Federation of Students found that 83 per cent of Nova Scotians thought that the government should reduce tuition fees. On top of this, Dexter cut funding for universities and colleges by 10 per cent.

When we take this disastrous record into account, it is no surprise as to why the NSNDP were thumped at the polls in 2013 and reduced to third in the provincial legislature. The Dexter government was the only provincial government in Nova Scotia in 131 years to serve just one term!

Defeat for the party establishment

The election of Burrill as party leader is a firm rejection of the path pursued by Dexter, who moved the party to the right. Dave Wilson, who was a cabinet minister in the Dexter government and therefore considered to be a continuation of the Dexter legacy, finished in third place and didn't even make it onto the final ballot. According to Lenore Zann, "Dave was in the cabinet and he was very close with Darrell and he's in that same circle. So this way it's somebody completely outside that circle and that sends a big message." In addition, not one NDP MLA backed Burrill in his bid for the leadership of the party.

So where did Gary Burrill come from? Burrill was one of the MPs elected in the wave which brought the Dexter government to power. He was a back bench MLA and was largely sidelined by the Dexter leadership who were wary to give critics like Burrill any position of importance in the government. In Howard Epstien's book Rise Again, Nova Scotia's NDP on the Rocks, Epstein wrote "Critics in caucus, such as Gary Burrill, were ignored and slighted." Epstein explained that when Burrill was the assistant to community services minister Denise Peterson-Rafuse, he “was never asked for any input on anything.”

The anger and disappointment of NDP members manifested itself in the Gary Burrill phenomenon. Normally someone of little importance in the NDP, sidelined and slighted, Burrill has been catapulted into the leadership of the party on the back of a revolt of the rank-and-file. This was such a shock to the establishment of the party that the party's website was not updated to announce the leadership results for an entire week following Burrill's victory! It was also announced that there were three openings at the NSNDP office and Jim Morton, the new chief of staff for the party, would not say if these openings were a result of layoffs or resignations.

A self-described anti-capitalist Christian socialist, Burrill's message was clear and bold. In his victory speech he stated that “There is a, as I described it today, a burgeoning and a simmering hunger for a politics that talk straight about the fact that the 1% in this city make $330,000, while the average income for people in Nova Scotia is under $27,000.” In a clear break with the Dexter legacy, his program included eliminating tuition fees, raising the minimum wage to $15 an hour, expanding healthcare to encompass dental coverage, and raising taxes on the “1%”. The Burrill campaign even used the hashtag #feelburrill, openly copying #feelthebern from the Sanders campaign in the United States.

Socialism is the only way forward!

As Marxists, we support this progressive backlash against the establishment of the party. But will Burrill's program work to eliminate poverty and combat growing inequalities in our society?

The Dexter government, faced with economic crisis and a shrinking budget, decided to offload the burden of this onto the backs of workers and youth in the province in the form of cuts to public spending. When asked about the Dexter government balancing the budget through austerity measures, Burrill stated “What was required was not balancing the books... But major social investment." In order to pay for this social investment, Burrill has proposed a system of progressive taxation, with raises on the top two tax brackets “by a minimum of 1%” and to “fully tax capital gains”. While Marxists are of course in favour of taxing the rich, we do not believe that on its own it will solve the problems facing Nova Scotian workers and youth.

Under capitalism, the driving force in the economy is private investment. When confronted with a deep economic crisis like the one we are currently experiencing, capitalists choose not to invest their money but instead hoard it and invest it in more profitable markets where labour is cheaper and their operating costs are lower. Through simply raising taxes, this works as a counter incentive to private investment and only contributes to the economic crisis. We cannot control what we do not own.

Burrill's program only states that he will “consider public ownership of some segments of our provincial infrastructure.” His program specifically mentions railways and electricity as segments of the economy to consider bringing under public ownership. Why only consider some segments? Marxists believe that as long as the main industries remain in the hands of a tiny number of unelected individuals who produce for private profit, we will never be able to exit the logic of austerity. Marxists stand for the nationalization of the major levers of the economy, under workers’ democratic control and management and compensation only in the case of proven need, in order to implement a rational and democratic socialist plan of production, based on human need instead of corporate profit. Under these conditions, all of the reforms that Burrill has promised and more would be possible as we would finally be able to wrest control of our lives from the 1%!