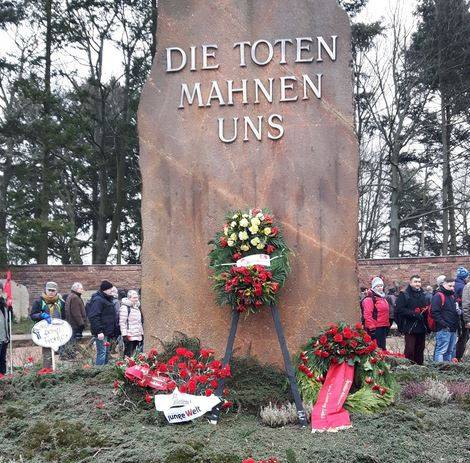 On Sunday, 14 January 2018, tens-of-thousands of activists from different labour and left-wing organisations came to the Berlin Socialist Memorial Cemetery in the Eastern suburb of Friedrichsfelde to commemorate the murder of the outstanding German revolutionaries and Marxists Rosa Luxemburg and Karl Liebknecht on 15 January 1919.

Rosa and Karl were the founders of the Spartacist League and the Communist Party (KPD) in 1918 and the most famous of many victims of a one-sided civil war that was unleashed by the reactionary Freikorps military forces who had formed a counter-revolutionary conspiracy with right-wing social democratic leaders such as Friedrich Ebert, Gustav Noske and Philipp Scheidemann to drown the revolution in blood. 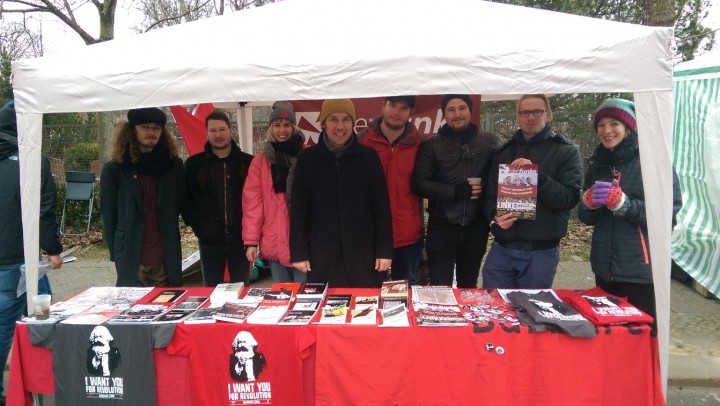 Der Funke comrades at the memorial demonstration / Image: own work

Public commemoration of their murder has a long tradition that was initiated by the Communist Party (KPD) in the 1920s and existed for decades in the former Stalinist state of DDR (East Germany). Until 1990 it was an official state event and participation was deemed a must for party officials and workers in Berlin. Yet, since the capitalist unification of Germany in 1990, this tradition has continued to exist on a voluntary basis. Though bourgeois politicians and their media thought that this traditional annual event would quickly disappear in the 1990s, young and old people from all over Germany keep coming along irrespective of the weather conditions and against all odds.

The event, which is traditionally held on the second Sunday in January, lasted from 9am to 2pm. A never-ending stream of people walked to the memorial cemetery and laid flowers there. Like every year, the top leaders of DIE LINKE (Left Party) collectively appeared at nine o'clock in the morning. The traditional march started from Karl Marx Avenue at 10am and arrived at the memorial at midday. Comrades of Der Funke/IMT Germany were present at the memorial for the whole timespan with a bookstall, selling quite a number of journals, pamphlets and books. The income from sales last Sunday was by far the highest ever achieved at this event since the 1990s. 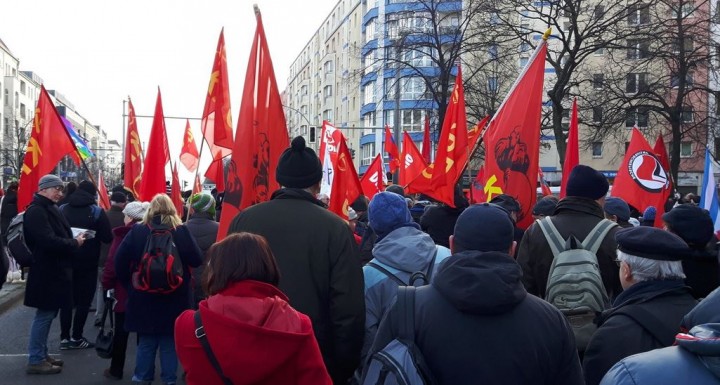 Thousands arrived to show their respects / Image: fair use

This year marks the 100th anniversary of the German revolution, which in November 1918 brought down the emperor (Kaiser), ended the war and was marked by the setting up of workers' and soldiers' councils in all major industrial cities of Germany. The preconditions for a successful workers´ revolution and the setting up of a socialist republic were better than in Russia in 1917. Yet the right-wing SPD leaders did their utmost to stop the revolution and restore the bourgeois state. Though Liebknecht and Luxemburg did not enjoy mass support in the initial phase of the revolution and were lacking a disciplined organisation following the model of the Bolshevik Party, the ruling class and right-wing SPD leaders recognized their ideas and potential to build a strong revolutionary party as a mortal threat.

Rosa and Karl were known as brave fighters against war, militarism, capitalism and a bureaucratic, right-wing, social democratic caste at the top of the labour movement. Luxemburg produced precious Marxist writings that are as relevant today as they were then. Liebknecht was the first socialist MP who had openly stood up and opposed the war credits in the Reichstag, the old German parliament, on 2 December, 1914. In the context of the anniversary of the 1918 revolution it is important to study the lives, struggles and writings of Karl and Rosa and learn lessons for today.