Germany
Share
Tweet
After Italy, Greece, Spain and other countries in Europe, now Germany is being hit by a wave of student protest. The same policies everywhere, cuts in spending and privatisation of the education system, are provoking the same reaction. The youth is mobilising massively, indicating that an even bigger movement of the working class is being prepared.

This Wednesday, 12 November, 100,000 school and university students all over Germany came out on to the streets to demonstrate against the continuous worsening of the education system. In more than 40 cities students followed a coordinated strike appeal to show their bias against the advancing privatisation of schools and universities. This reveals after the impressive student demonstrations in Spain, Italy and Greece a growing discontent and radicalisation of the youth on a European scale. 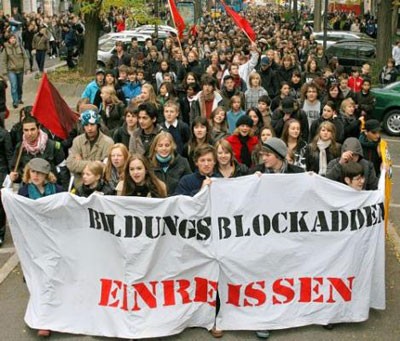 Already in May and June this year 40,000 students went on strike throughout Germany. As a result of the strikes in spring, Chancellor Angela Merkel promised an education summit and improvements. This summit was held on 22 October. Not a single student was invited and the summit came up with no concrete results. Also as a consequence of the strikes in spring student committees in different cities and a nationwide students' action alliance were formed, which was responsible for coordinating future actions. The action alliance had its first conference in Berlin one month ago. This alliance was in charge of planning and coordinating the strike action in different cities and had a website to spread the strike call as widely as possible. They were also seeking collaboration with trade unions, parties and different NGOs, many of whom declared their solidarity immediately.

On Wednesday 8,000 students came out in Berlin, another 8,000 in both Hamburg and Stuttgart, 10,000 in Braunschweig, 7,000 in Bremen, 5,000 in Rostock, 4,500 in Kiel, 4,000 in Oldenburg and 2,000 in Munich. In Hessen altogether 10,000 students participated in the demonstrations in Kassel, Frankfurt and Gießen. There were many other demonstrations with hundreds of participants in many other cities (see a map of the different demonstrations). This turnout was exceeded the expectations of the organisers. And the high number is even more impressive as in many cases the students were intimidated beforehand, because headmasters were threatening detention, grading down or even expulsions from school. The Ministry of Education announced they would record which students went on strike. But these scandalous attempts at intimidation did not prevent tens of thousands from turning out to fight for their rights.

The strikers demanded free education for all; no to university and school fees; lowering the number of students per class room; for the taking on of enough teachers as a first step to limit each class to 20 students; no to a mark for behaviour and "cooperation" during lessons in the school report; no to private sponsoring and privatisation of the education system. 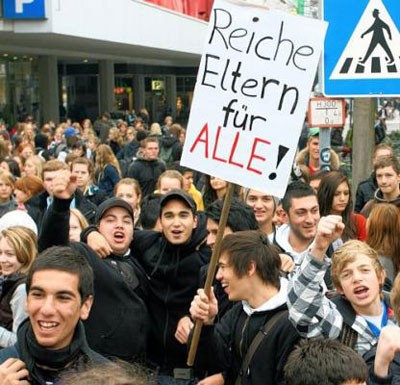 They also called for the withdrawal of the "high school leaving examination after 12 years" in those states that have introduced this regulation. In the past school students finished school after 13 years. The new regulation means that the same syllabus has to be done in a shorter period of time, which means more stress for students, but also for the teachers. Even parents complained about this situation, saying that they are getting tired of the fact that the only object of conversation in the family has become the increasing amount of work in school. The students are also opposed to the system that gives a good education to only a small elite while worsening the quality for the majority. That is why they are calling for the abolition of the three-tier secondary education school system and the implementation of a comprehensive school system. At the moment schools students are streamed into three different levels.

The situation in some schools is already dreadful. One student of the Primo Levi Gymnasium in Berlin said they have to pay for the maintenance of the classroom and for the paint out of their own pockets and even go to the shops on their own in order to get the required material. Already for some time school students have had to pay for photocopies of study material. Another student from Brandenburg explained that because of a shortage of teachers not only many lessons, but even whole school subjects, have had to be cancelled, which has led to a situation that school students have not been given a mark for certain subjects in the end of year report. Some teachers still doing teacher-training are forced to take on the work of fully qualified teachers, which puts a lot of stress on them as they are left on their own to deal with grading and correcting.

The government is cutting millions of Euros from university funding and as a result some universities are on the verge of bankruptcy. In Berlin they have reduced subsidies from the province by 75 million Euros. This amounts to cutting 10,000 university places and 200 professorships at the three universities in the capital. According to Andreas Keller of the trade union for education and science (GEW), universities need 3.7 billion Euros more per year in order to guarantee a good quality of teaching. The government is unwilling to provide more funds. Instead the Kultusministerkonferenz (conference of the ministers of education of the different German states) and the Stifterverband (an independent body heavily financed by the Deutsche Bank, Daimler, Bosch and other companies) are organising a contest, in which universities and colleges are competing with each other for prize money of only 10 million Euros. But that is only the tip of the iceberg. 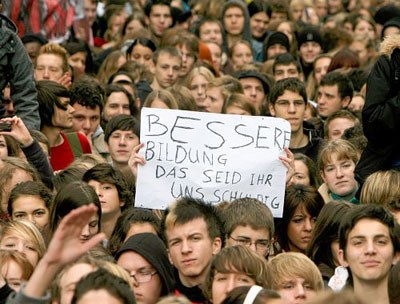 In this environment it is not surprising that students and teachers have reached the limit of what they can take. In some cities the demonstrations on Wednesday had a very radical character. In Hannover the students burst through the no-protest zone in front of the Landtag (local legislative assembly of a German state). In Erfurt the students occupied the local education authority and demanded that no disciplinary action be taken against striking students, while in Oldenburg one school was occupied. In Berlin hundreds of students symbolically occupied the Humboldt University for about half an hour. They rushed into the main hall and waved red flags from the balcony.

Just as we saw in Spain and Italy, many students have noticed how determined the German government is to cut spending on the education system, while at the same time it did not hesitate one moment to hand over 500 billion Euros of taxpayers' money to the banks. Many carried placards with slogans like "Education instead of banks" and "Billions for the banks, but education is axed". Many youth are now beginning to draw the necessary conclusions on how the capitalist system works: not for the millions who are willing to learn and educate themselves, but for the profits of a few companies, which are trying to exploit every corner of society in their greed for money.

In many cities teachers joined the protests. The miserable situation within the education system also affects them and many of them may lose their jobs in the near future or are becoming more prone to illness because of the increasing pressures, with some of them now working an average of up to 60 hours. Reports say that in various schools the teachers even picked up their students and went together to the demonstration, as was the case for example in the Beethoven-Gymnasium in Berlin-Steglitz. More teachers could have participated if they had not been threatened with disciplinary proceedings. 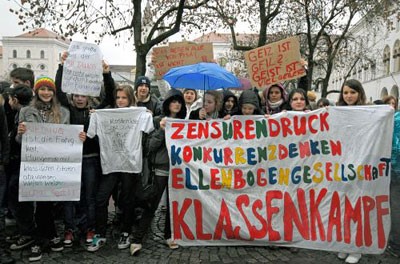 Solidarity with the teachers and other workers is also the only way in which the students' movement can be successful. It is therefore an important signal that the Trade Union for Education and Science (GEW) officially supported the student strike and, as already stated above, the students' action alliance was seeking collaboration with the trade unions. The student movement has to join forces with other layers of society for a joint struggle against the worsening of the situation which is not only taking place in the education system but in all areas of society. On Monday there was for example a 10,000-strong strike of the public sector workers in Berlin for a pay increase, in which lots of teachers also participated. In order to have a greater impact in the future, the students' action alliance and the trade unions should work together and schedule their protests for the same day.

Some representatives of the students' action alliance are of the opinion that this single strike will not immediately lead to a change in government policy, but they think that it has had an effect in the schools. The different committees are already working on further actions in the near future.

However, we can go even further. As students are facing the same problem in one country after another - privatisation of the education system and therefore massive deterioration in quality - what is required is to link the different struggles in the different countries together and mobilise for a European-wide student and teacher strike on the same day. This year we are celebrating the 40th anniversary of the 1968 movement, which was an inspiring example. But in the conditions of today, we could be facing in the not too distant future mobilisations of the youth and workers on a far vaster scale, on an all-European or even a world scale.

The process of "globalisation" has not just led to the integration of all countries into one global capitalist system. It has also globalised the class struggle. We have big movements of students in many European countries in the recent period, such as Italy, Greece and Spain. Now it is affecting Germany. This movement of the youth is a harbinger of greater things to come. It is an indication of the deep malaise and discontent within society, and it will erupt as a new wave of class struggle across Europe and beyond.

Video of the student strike in Braunschweig (November 12)

Video of the student strike in Berlin (May 22)