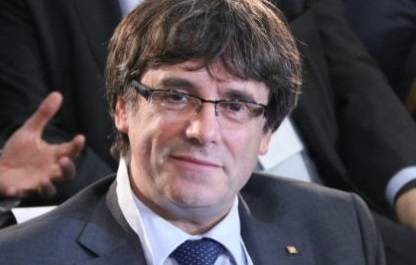 Yesterday, the Spanish regime’s strategy of repression against the Catalan independence movement suffered a serious blow, when a German court in Schleswig-Holstein decided there were no grounds to extradite Catalan President Carles Puigdemont for rebellion. Additionally, a series of decisions by the Belgian justice system further undermined the position of the Spanish regime.

Catalan president Puigdemont was arrested in Germany on 25 March. The Spanish secret service had followed him as he travelled back from Finland, where he had attended a public meeting, to Belgium: his place of residence since he left Catalonia on October 29 to avoid arrest. Spain had issued a euro-arrest warrant against him while in Belgium, but then withdrew it when it became clear that the Belgian courts would not accept extradition for rebellion, a crime that doesn’t exist in that country’s penal code.

The Spanish state thought that this would not be a problem in Germany, where an equivalent crime, high treason, does exist. Furthermore, Merkel is regarded as a close political ally to Spanish right-wing premier Rajoy and the Spanish state it would be a matter of course for the Germans to proceed with the euro-arrest warrant and extradition request. The German State Prosecutor recommended that the request should be granted. 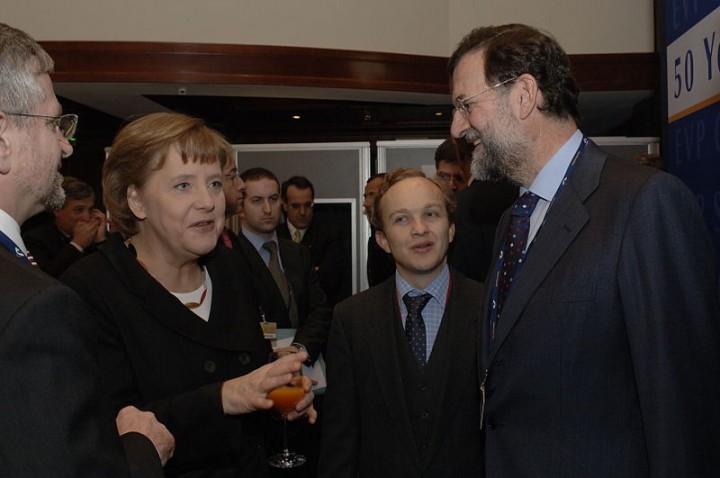 Yesterday, surprisingly, the Schleswig-Holstein Higher Regional Court that had to take the decision rejected extradition for the crime of rebellion and agreed to release Puigdemont on a €75,000 bail pending consideration of the details of the extradition request for the lesser charge of aggravated misuse of public funds. This decision throws the whole strategy of the Spanish regime into disarray.

In its ruling, the regional court specifies that the reason to reject the charge of rebellion is that it cannot see there was any violence committed by Puigdemont during the 1 October referendum. This is a necessary requisite for the crime of rebellion, which in the Spanish penal code is described as a “violent uprising” against the state. Violence is also a necessary part in the German crime of high treason. “The eligible offense of high treason was not met because it lacked the feature of ‘violence’”, the German court declared, very clearly.

The whole case of judge Llarena in the Spanish Constitutional Court, involving dozens of Catalan politicians, is based precisely on the argument that they exercised violence to carry out the referendum and can therefore be indicted for rebellion, a charge that carries a jail sentence of up to 30 years.

As we have already explained, the judge has had to carry out multiple legal pirouettes in order to include violence in his arguments for prosecution. The organisation and conduction of the Catalan independence referendum was completely peaceful on the part of its promoters. There was violence, yes, but that was on the part of thousands of police and civil guard agents sent by the Spanish state to physically prevent the referendum, which used brutal repression on the day against peaceful civilians attempting to cast their ballots. Judge Llarena’s ‘argument’ is that the Catalan authorities “must have known” that the state would use its “monopoly on violence” to prevent the the referendum, therefore they are responsible for the violence of the Spanish state!

The decision of the German tribunal blows a big hole under the water line of the whole strategy of the Spanish state. Even if Puigdemont is finally extradited for misuse of public funds, the Spanish court cannot try him for rebellion. Since the charges against the Catalan politicians are part of one single prosecution it is very unlikely that the others can now be tried for that charge, meaning the whole prosecution will crumble. Furthermore, prosecution for rebellion implies inhabilitation for public office, even before trial, preventing Puigdemont and other Catalan politicians from being eligible for the position of president of the Catalan government, but this is not the case with misuse of public funds. The Spanish state could still prevent Puigdemont from being elected as president by putting him in pre-trial detention, which they will probably will, but the arguments against this will now be stronger and such a move will be seen, even more, as a politically motivated action of interfering with the democratic will of the Catalan people. The Spanish courts are already looking for ways to minimise the damage done. They will probably ask for the maximum sentence possible for aggravated misuse of public funds, which carries up to 12 years in jail. At the same time, unable to prosecute the others for rebellion, they could change the charge to sedition, which could mean up to 15 years in jail.

The embarrassment for the Spanish regime was compounded by two decisions of the Belgian justice system. First of all, a Belgian court decided to release Catalan ministers Toni Comín, Meritxell Serret and Lluís Puig. The judge has decided to not impose any cautionary measures nor ask for bail whilst they consider the extradition warrants requested by the Spanish state against the three. 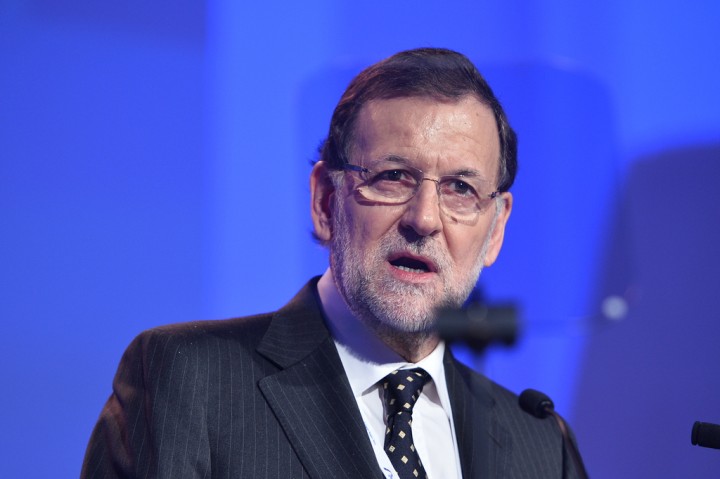 Failing to get Puigdemont extradited for rebellion is a huge blow for the Spanish state's strategy of repression against the Catalan independence movement / Image: Flickr, EPP

Secondly, the Belgian Public Prosecution Service has opened an investigation into the use of a GPS tracker on Puigdemont’s car by the Spanish secret services while he was in that country. This action, which allowed the Spanish intelligence to follow Puigdemont on his way back from Finland and decide the exact country in which they wanted him to be arrested, could potentially have been carried out against Belgian law.

The decision of the German judge is also an embarrassment for the Spanish left, which while vaguely condemning in general terms “the judicialisation of a political conflict”, had fallen short of denouncing the jailing of Catalan politicians, demanding their immediate release and opposing the extradition of Puigdemont. More importantly, they had not lifted a finger in any practical way to mobilise against the repression of democratic rights that all these actions represent. 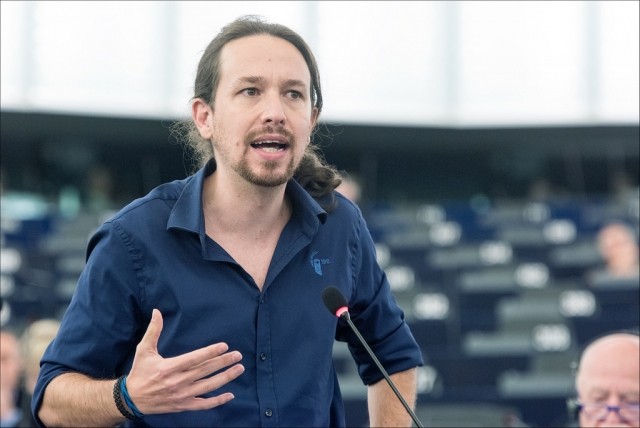 The Spanish left has failed to mobilise in unequivocal opposition to the repression of Catalan democratic rights / Image: public domain

The embarrassment was aggravated by contrasting the lack of action by the leaders of PODEMOS and United Left, with the behaviour of their German, Portuguese and even French counterparts. In Portugal, both the Communist Party and the Bloco d’Esquerda moved motions in parliament rejecting repression against Catalan politicians and demanding Puigdemont should not be extradited. The motions were defeated but managed to split the ruling Socialist Party. One clause of the motion, demanding a political solution to the Catalan issue, was passed. In France, the Communist Party issued a statement openly demanding the release of Catalan political prisoners and opposing the extradition of Puigdemont, something the Spanish Communist Party couldn’t bring itself to do. For its part, the German Die Linke party adopted a democratic and principled approach to the question, demanding Puigdemont should not be extradited, visiting him in jail and offering practical and legal support (including a permanent residence in Germany) and mobilising in the streets against the extradition.

In Spain though, it was left to a small group of activists around Madrileños por el Derecho a Decidir (‘Madrid for the Right to Decide’) to mobilise to oppose the extradition of Puigdemont. Had the leaders of Podemos and United Left taken a principled democratic stance on this question and mobilised to oppose the extradition of Puigdemont, the blow to the Spanish state delivered by the German courts would be more damaging and the left in Spain would benefit from it.

As a matter of fact, the Spanish regime is in a very weak position at the moment. The mass movement of the 8 March women’s day strike and of the pensioners (which continues unabated) have created a different mood, one of confidence and militancy. The ruling Popular Party has tried to agitate the themes of Spanish tradition and unity during Easter, but that can only have a limited effect amongst the hardcore of its rank-and-file supporters. The party is now immersed in an extremely damaging scandal as it has been revealed that Madrid Region President, Cristina Cifuentes, forged her Masters degree. The web of lies with which it attempted to protect her is rapidly unravelling and the case could lead to her downfall. 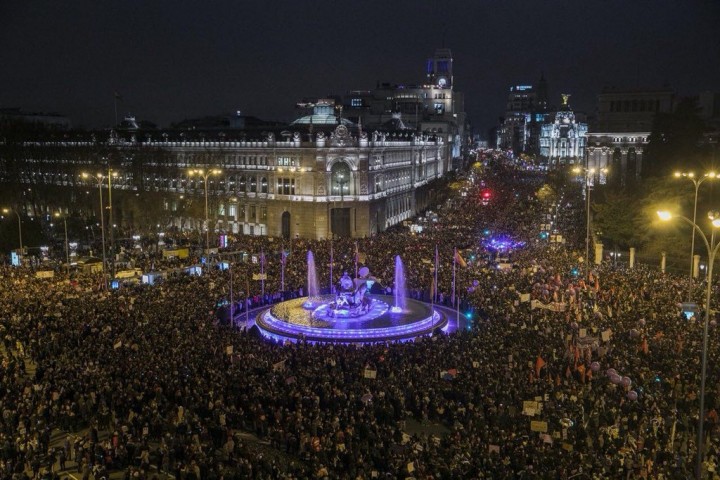 The bold and rebellious mood in Spain puts the PP in a weak position / Image: Isabel Serra

The ruling PP calculated that an offensive against Catalonia, possible including images of Puigdemont arriving in Madrid in handcuffs, would guarantee the necessary support of Ciudadanos for its budget, which is now going to be put to Parliament. Even that was a complicated gamble, as the PP and Ciudadanos do not have the necessary majority and require the additional votes of the Basque Nationalist Party, whose rank-and-file is not pleased with the jailing of Catalan politicians. The decision of the German court weakens the PP even more.

In these conditions, the Spanish left should be organising a broad front against repression, in defence of democratic rights and against corruption; linking this with the more general demands of higher pensions, against cuts and austerity and so on. Such an offensive, with mass mobilisations in the streets, could bring the government down. The meekness and cowardice of the leaders of the Spanish left is a major impediment.