Greece
Share
Tweet
On Tuesday, October 21, Greece was once more rocked by a general strike, the ninth since the present ND government has been in office. There were also many students on the rallies, as a wave of school occupations spreads across Greece. 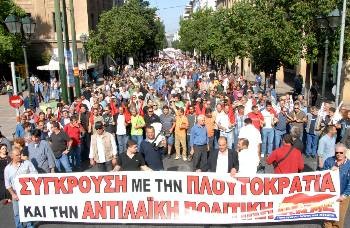 On Tuesday 21st of October there was one more important general strike in Greece. This is the ninth general strike since the ND took office in 2004. The strike was called by the Greek Workers Confideration (GSEE) and the Confederation of the Workers in the Public Sector (ADEDY).

Overall participation on the part of the workers can be considered “satisfactory” if one takes into account two factors: the confusion and the unease that exists within the labour movement in relation to the present world crisis of capitalism and also the very bad way in which the leaders of the GSEE organised the general strike (no real campaigns in the workplaces, especially in the private sector, no concrete plan of action for the immediate future, etc).

There was, however, a high level of participation in the public sector (state services, healthcare, education) and in the local municipalities (70-75% participation), in the mass media, both electronic and printed (almost 100%), in the big industries (50-60%) with a much smaller participation in the more general private sector and among the shop workers. 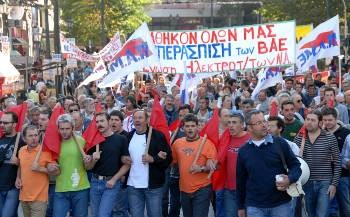 There were strike rallies in 60 towns and cities across Greece with the participation of thousands of workers. In Athens there were two separate rallies, one of the GSEE and one of the trade union front of the KKE (Greek Communist Party), with the participation of 8-9,000 in each one. The main demands of the strike were for a radical change in the economic policy of the government, against the rising cost of living and against privatisations. This comes at a moment when the Karamanlis government is planning to give 28 billion euros to the Greek bankers in an attempt to avoid the risk of a financial crash.

Many university and school students also participated in the demonstrations, protesting against cuts in government spending on Public education and also against the privatisation of University education. What needs to be highlighted here is the fact that as we write a movement of school occupations is spreading across Greece with 250 schools already being occupied.

At the end of the demonstration the Police attacked the workers of Olympic Airways which tried to occupy the central office of the company in protest against the privatisation of the company. Two workers were seriously injured as a result of this brutal attack.

The very next day, October 22, there was a nationwide strike of the shopkeepers in Greece, with 100% participation in the rural and provincial areas, but a smaller participation in Athens and Thessalonica (the second biggest city in Greece). 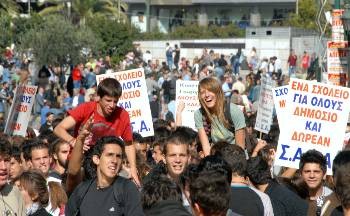 These massive anti-government actions, both of the Greek proletariat and of the petit bourgeois, underline the deep anti-capitalist mood that is growing among the masses. The ND government is very weak and crisis-ridden and every month it is being affected by one big scandal or other. The latest of these scandals provoked a big uproar after the summer. It is the scandal of the illegal exploitation on a large scale of public property (such as forests and lakes) by a part of the leadership of the Greek Orthodox Church together with friends and relatives of some ministers. Since the beginning of September two ministers have had to resign – the latest one being the minister for Mass Media just yesterday. Another three ministers may also be taken to court because of their participation in the scandal.

And while all this is going on the New Democracy party in all the latest opinion polls is emerging for the first time since it was elected as no longer the first party. After five years the PASOK is the first party in the opinion polls with (although much lower than it had in the past) 29.5%, with ND at 27.5%. SYRIZA (the electoral front of Synaspismos) stands at around 10-11% and the KKE (Communist Party) at 7.5-8%. So, the main tendency is one of a turn towards the workers’ parties of the opposition, while the extreme right wing LAOS party proving incapable of benefiting much from the decline of the ND, receiving in the opinion polls a mere 4.5%. 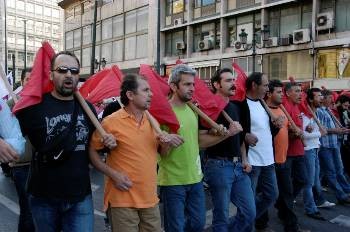 All the conditions now exist for a very “hot” winter in Greek society, with the possibility of another much bigger general strike in the coming months. These conditions could very possibly lead to early elections, because the Karamanlis government has a very weak majority in the parliament, of only 2 MPs.

This mood of growing working class militancy and the generalised political instability that afflicts Greeks society, will also increase the pressures to the left within the workers’ parties and the other traditional mass organisations of the working class such as the trade unions, thereby creating big opportunities for the ideas of Marxism.

The Greek section of the IMT that produces the paper “Marxistiki Foni” is working hard to step up its activities in building up a Marxist tendency within the labour movement and in the youth. As part of this task, on Tuesday we intervened in two strike rallies in Athens and in Komotini (north-eastern Greece) selling many papers and distributing a special leaflet in which we call for united strike rallies, for the United Front of the workers’ parties (PASOK, KKE and SYRIZA) against the attacks of the Greek bourgeoisie and for a left government with a socialist programme.