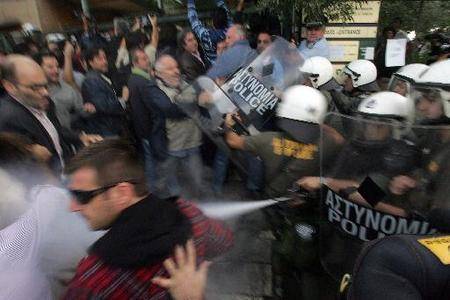 The protest of the Ministry of Culture workers began on Tuesday using banners and distributing leaflets stating their demands to foreign tourists and locals visiting the Acropolis. Their request was to renew the contracts of their co-workers who cover permanent needs of the ministry but who are employed on fixed term contracts.

By employing workers in this way, the government makes sure the workers vote for the governing party (because if they lose the elections, the workers would be out of job as the new government would employ their own “slaves”!). It also means that the workers have fewer employment rights than the permanent staff. Another point is that if the government wants to sell any functions of the ministry to private companies, the new owner can sack the staff without having to pay a penny and employ others on less wages.

On Wednesday, the Attorney Nikos Gizis, came to the entrance of the Acropolis where the protesters were and warned them that if they did leave, they would be charged for "occupying public space." At 10pm, while 22 protesters had decided to stay through the night at the entrance of the Acropolis, the nearby police station informed Mr Gizis of this development. Around 7am on

, the riot police cut some of the fencing behind the entrance of the Acropolis and trapped the protesters. As the protesters put up a fight with the riot police, in the presence of international mass media, the police threw tear gas at the protesters and the journalists. A woman was beaten, a protester was rushed to the hospital with a hernia crisis because of the beatings, a cameraman of the Greek TV station Skai was kicked in the back and a camera of Reuters was smashed. It was lucky for the protesters that the media were there; otherwise the raw brutality of the “socialist” government of Greece would have been unleashed. The door opened, but the protesters remained in place with a squad of riot police. 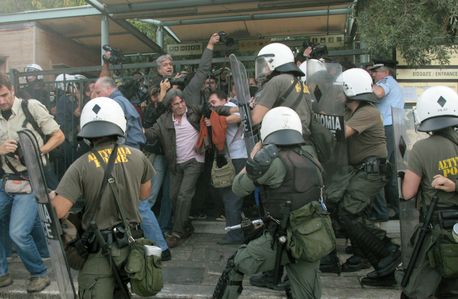 The mass media and their bosses are trying to impose their views on the working class of Greece. They say that everyone has the right to protest, but the Acropolis is something sacred and we must not touch it. They say that the image of Greece is damaged in the eyes of our tourists. They say that the Parthenon Marbles will not return from the British Museum if we keep doing such things.

But they conveniently forget to say other things. They don’t say that most of those protesters have not been paid since January 1, 2008. They don’t say anything about the workers who work their night shift in the Acropolis and at 6.30am they have to go and work in other jobs, some as builders, for another 8 hours to cover their living expenses. They don’t say anything about the shambolic state of Greek tourism which was a creation of the governments of the Capital. Tourism is the main Greek industry and this explains the interest of the bourgeoisie for “our” image outside Greece. However, nobody asks them why this “tourist product” is the most expensive in Europe, while the wages of the workers are less than the official minimum national wage and much less than the minimum European wage. Or why the governments give generous tax relief and state funding to the big hotel owners. Or what is destroying more the “image” of Greece than the destruction of the environment, when hotels are being built less 200 meters away from the beach

The only solution to the undeclared bankruptcy of the capitalist system is the social transformation of the world economy under workers’ control. Only under a democratic socialist planned economy, can the productive resources of society be used in the interests of the majority and not those of a handful of capitalist adventurers.