Details
Marxistiki Foni Editorial Board
06 May 2010 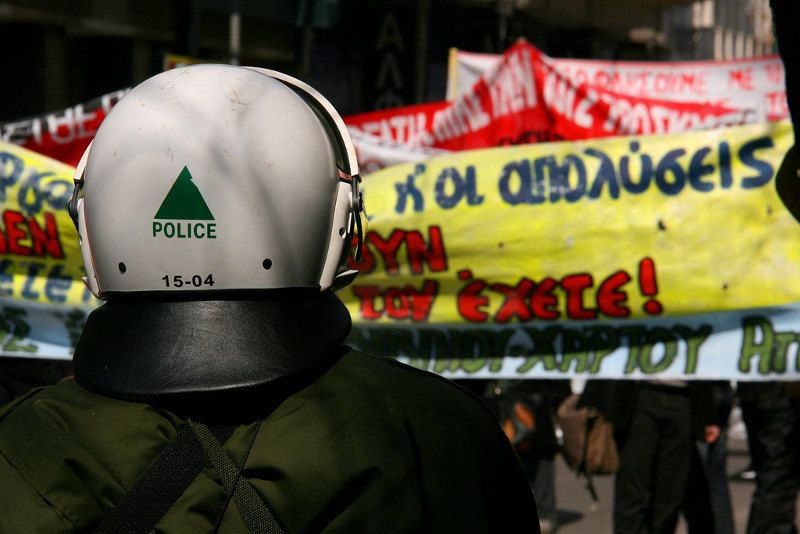 The constant attacks on the Greek working class over recent months have finally brought the situation to boiling point. The workers have had enough! They are not prepared to pay for a crisis which is not of their making. Yesterday Greece was totally paralysed as the workers and youth came out massively in protest. The tragic killing of three bank workers, however, is being used to distract attention away from this impressive show of strength by the Greek working class.

Yesterday, Greece officially entered a new era of class struggle. The incessant attacks against the living standards of the working class on the part of the capitalists have provoked a massive and militant movement.

Yesterday’s general strike was the first act of this movement. Greece was paralyzed, but not only in the public sector as in the previous general strikes of February and March, but also in the private sector. Over 150,000 workers participated in the strike in Athens, which was characterized by a great feeling of radicalisation and anger. Many of those taking part in the Athens strike said that this mobilisation was equalled only by the great general strike against the “Yiannitsi measures” (in 2001, the PASOK government proposed a law against social security, which was ultimately withdrawn due to a massive general strike). Huge and militant demonstrations took place in 68 cities in total, of which the demonstrations in Thessaloniki, Patras, Herakleion and Ioannina were especially massive.

The immense anger towards the latest offensive against the living standards of the working class was expressed in the mobilisations organised by GSEE-ADEDY (the main trade union confederations) and by PAME (the Communist Party’s faction in the trade unions) in slogans such as “No sacrifices for the plutocracy” and “PASOK-New Democracy: austerity – unemployment – terrorism”. The growing anger against the trade union bureaucracy was reflected in the constant and intense booing during the speech given by the GSEE president, Υannis Panagopoulos, during the GSEE-ADEDY rally in central Athens. It is also to be noted that during the protests, we witnessed a spontaneous, aggressive mood against the oppressive police forces, the banks and public buildings among many protesters, which clearly shows that “boiling point” has been reached in the mass consciousness.

However, unfortunately, this decisive fact of massive and militant demonstrations in Athens and all over the country was overshadowed by the tragic killing of three employees, a man and two women, in a branch of the “MARFIN” bank due to arson caused by “Molotov cocktails”. This was a criminal act against young white-collar workers, working in a branch where the bosses’ terror is huge and where the workers are forced to work under the fear of losing their jobs. These unfortunate workers could not get out of the building, due to the criminal indifference of the bank manager, who did not guarantee either fire safety measures or an emergency exit. Moreover, questions have been asked as to the reason for the passive stance of the police which, despite its large presence in the demonstration, did not take measures to stop the burning of a bank, which was working normally in the centre of Athens and was situated near the route of a demonstration mainly directed against the predatory role of the banks.

No one can say with absolute certainty whether this act of arson was an expression of blind, criminal and desperate violence on the part of the anarchists or a well organised provocation by the forces of state oppression, in order to slander the workers’ movement. If we take account of the general make up of the demonstrations, together with the tragic deaths in “MARFIN”, the many attacks on stores in Thessaloniki and the accusations made by the General Secretary of the KKE (the Communist Party) about provocation by members of the fascist “Chrysi Avgi”, organisation who were holding PAME banners, it is possible that an extensive plan of provocations was orchestrated by the State.

However, even if these events were not an organised act of provocation, they objectively acted as one. They catastrophically undermine a grand movement at its birth, because they serve to overshadow the event of the mass general strike, they terrorise workers, preventing them from participating in the movement, while at the same time sanctifying the forthcoming escalation of police violence.

The government and the bourgeois media were eager to exploit this “manna from heaven”. They brought up again the issue of “a general condemnation of violence and chaos”, incriminating, indirectly but clearly, the movement itself and the Left. The government, as a means of isolating the movement, re-proposed the immediate calling of a conference of the leaders of the political parties due to this “critical moment of the motherland”, as it had done a few days ago, but which was cancelled due to public wrath.

The leaderships of the Left should not fall for this bourgeois trap and should not attend any conference with the government and the right-wing parties, which support the government’s measures. The participation of the KKE or the SYRIZA leadership in such a conference would be an act of subversion against this mighty workers’ and youth movement. On the contrary, they must concentrate their power in order to escalate the struggle. The message that yesterday’s protesters sent was that the workers want to fight and this message must be heard by every left party leadership. Yesterday’s general strike must become the first step towards a plan of struggle, which will be discussed in every workplace and should escalate to a 48-hour general strike during the following days, followed by the perspective of an all out strike until the government backs off.

At the same time, these events tragically underline the imperative need to disassociate the workers’ movement and the Left from the anarchists, who with their irresponsible and desperate actions become the breeding ground for provocations of every type whose aim is the undermining of the real mass movement. Every anarchist group which practices blind and desperate violence, must be kept away from the mass workers’ and youth movement through decisive and organised measures.

Letter by a Greek bank worker

I feel an obligation toward my co-workers who have so unjustly died today to speak out and to say some objective truths. I am sending this message to all media outlets. Anyone who still bares some consciousness should publish it. The rest can continue to play the government’s game.

The fire brigade had never issued an operating license to the building in question. The agreement for it to operate was under the table, as it practically happens with all businesses and companies in Greece.

The building in question has no fire safety mechanisms in place, neither planned nor installed ones – that is, it has no ceiling sprinklers, fire exits or fire hoses. There are only some portable fire extinguishers which, of course, cannot help in dealing with extensive fire in a building that is built with long-outdated security standards.

No branch of Marfin bank has had any member of staff trained in dealing with fire, not even in the use of the few fire extinguishers. The management also uses the high costs of such training as a pretext and will not take even the most basic measures to protect its staff.

There has never been a single evacuation exercise in any building by staff members, nor have there been any training sessions by the fire-brigade, to give instructions for situations like this. The only training sessions that have taken place at Marfin Bank concern terrorist action scenarios and specifically planning the escape of the banks’ “big heads” from their offices in such a situation.

The building in question had no special accommodation for the case of fire, even though its construction is very sensitive under such circumstances and even though it was filled with materials from floor to ceiling. Materials which are very inflammable, such as paper, plastics, wires, furniture. The building is objectively unsuitable for use as a bank due to its construction.

No member of security has any knowledge of first aid or fire extinguishing, even though they are every time practically charged with securing the building. The bank employees have to turn into firemen or security staff according to the appetite of Mr Vgenopoulos [owner of Marfin Bank].

The management of the bank strictly bared the employees from leaving today, even though they had persistently asked so themselves from very early this morning – while they also forced the employees to lock up the doors and repeatedly confirmed that the building remained locked up throughout the day, over the phone. They even blocked off their internet access so as to prevent the employees from communicating with the outside world.

For many days now there has been some complete terrorisation of the bank’s employees in regard to the mobilisations of these days, with the verbal “offer”: you either work, or you get fired.

The two undercover police who are dispatched at the branch in question for robbery prevention did not show up today, even though the bank’s management had verbally promised to the employees that they would be there.

At last, gentlemen, make your self-criticism and stop wandering around pretending to be shocked. You are responsible for what happened today and in any rightful state (like the ones you like to use from time to time as leading examples on your TV shows) you would have already been arrested for the above actions. My co-workers lost their lives today by malice: the malice of Marfin Bank and Mr. Vgenopoulos personally who explicitly stated that whoever didin’t come to work today [May 5th, a day of a general strike!] should not bother showing up for work tomorrow [as they would get fired].