Greece
Share
Tweet
Yesterday a powerful general strike shook Greece. There was a massive turnout and the whole of Greece was brought to a standstill. The New Democracy government is attempting to introduce severe cuts in the pension system. All they have achieved is a massive radicalisation of society. 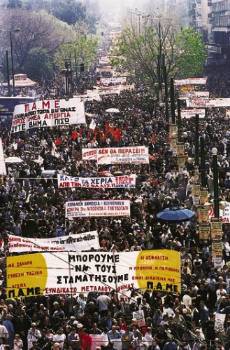 Yesterday, December 12, the working class and poor of Greece made a powerful impact on the political and social situation. Only three months after the re-election of the New Democracy government the great majority of the Greek people participated in a big movement against the bosses' attacks on the social security system.

The 24-hour general strike was called by GSEE (blue and white collar workers) and ADEDY (public sector office workers) the two largest unions, which represent about 2.5 millions Greek workers. The mobilisation also involved the lawyers, the journalists, the shopkeepers, the owners of small companies and the engineers. All the main means of transport (metro, buses, ships, airports) were completely paralysed for the whole day, except for the metro which was allowed to operate for a few hours to transport the demonstrators to the strike rallies.

In all the major industries of the country, in the big state-owned companies, in all the main workplaces, participation in the general strike was from 80-100%. In many workplaces (such as shops, service enterprises, offices) where the number of workers is small and where there is no active union, the official participation, as could be expected, was not so big. However, many of the workers in these small workplaces refused to go to the work using the excuse that there were no means of transport or they had "health problems". In reality all of them took part in the strike.

There were 64 demonstrations in different parts of the country. Of course, the biggest rallies took place in Athens. The biggest was that organised by the GSEE and ADEDY with the participation of 50-60,000 workers. The other rally, called by PAME, the KKE (Greek Communist Party) trade union front, saw the participation of 20-25,000 people.

There was a very militant and enthusiastic mood on the rallies. The number of young workers was very big. The slogans made it clear to the government that its measures against the social security system will not pass. The attacks on the workers' pensions by the PASOK government of Kostas Simitis in 2001 in the end remained merely a "piece of paper" after a powerful general strike at that time. This government's measures will meet the same fate.

We can say that with today's general strike the Greek workers have taken up once again the struggle of 2001, but in a different social and political situation. Now the workers have had all the experience of these last seven years. Any illusions some of them may have had about the ND government applying a pro-people policy have been dissipated. They have no illusions about the effects of the rates of economic growth that the government boasts about. After all these years of 4% annual growth, they see their debts have grown astronomically, their working day has been increased, their incomes have been reduced under the weight of inflation. And as the recent elections shows ‑ and the crisis in PASOK also underlines ‑ they have already started looking to the left for solutions to the capitalist impasse.

So, just three months after its re-election, the Karamanlis government is in a very difficult position. Already before the general strike, opinion polls revealed that 70% of the Greek population disagrees with the government's policy on social security, while 58% also disagrees with the economic policy of both the PASOK leadership and the ND government and even 25% of the ND voters (who voted for the ND only three months ago) disagree totally with the economic policy of the ND government.

The government has a very slim majority in parliament of only two MPS, while five New Democracy MPs have already stated that they do not agree with the proposed measures against the social security system.

All this explains why last Monday the government came up with a proposal to change the electoral system. They fear that under the blows of the working class movement, and with only a two MP majority, they may not manage to stay in power.

The original plan of the government, just after it was re-elected, was to attack the working class immediately and at all levels and then spend 2-3 years to build up their image in society. But real life and the class struggle are very different from the carefully prepared plans of the bourgeois. Today's general strike has torn through the utopian plans of the bourgeoisie. Now the social pressure on this government is greater than ever.

The government's "pension reform" involved the raising of the age of retirement, cuts in pension levels, the unification of the different pension funds, which in reality is a very thin disguise for what amounts to the cancellation of the conquests of many sections of workers. All this has acted like a catalyst for a massive radicalisation in society, which is placing Greece once again in the front line of the class struggle in Europe.

The Greek Marxist Tendency represented by the paper Marxistiki Foni (Marxist Voice) made a very successful intervention in both of the two big rallies, selling hundreds of papers. This shows that within the Greek working class there is a thirst for genuine socialist ideas and that in the coming period the Marxists will gain strong support in the Greek labour movement.