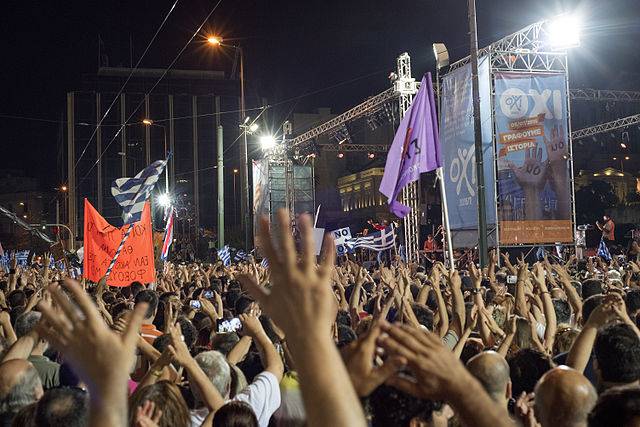 One year ago 60% of the Greek population said OXI [No] to the Troika’s austerity. One year later we see austerity continuing and getting much worse! I have been travelling to Greece at least once a year for close to twenty years to attend meetings and conferences and in the recent period the decline in living standards has been palpable.

When you go back to familiar areas every year you notice details that reveal what is going on. Some of the bars and restaurants have closed, as there has been a significant fall in the number of people who can afford to go out for a meal or even for a coffee!

Another more recent detail is that the average age of people sitting in the bars has gone up significantly. You see a lot of older people, and by older I mean 60+ and above, sitting in the bars in some areas and hardly any youth. The reason for this is that young people have been hit the most by the crisis, with either no jobs or very low paid jobs. The pensioners at least have the regular income of their pensions coming in every month.

You talk to a young comrade who tells you his father is a postal worker who used to earn €2000 a month before the crisis erupted, but now only brings in €1300 as a result of real cuts in wages. In October last year, when I was in Greece previously, one young doctor comrade told me he was doing research in a hospital and bringing home the sum of €400 a month. When I met him in June of this year he told me that now he was working for free! This means he was no longer getting the scholarship money but was staying on in the hope of getting a permanent contract at some point.

Then you talk to an older retired comrade in his seventies who tells you how many times his pension has been cut.  At the beginning of this month many pensioners got an unpleasant surprise when they went to check their monthly pension payments into their bank accounts. Hundreds of thousands of pensioners found a significant cut had been applied to their pensions, with some finding that up to 48 percent of their monthly income has evaporated! This is the result of the latest round of austerity introduced into this year’s budget. Soon we won’t see the pensioners in the bars either!

The crisis of capitalism and its immediate direct impact on people’s living standards in Greece is not an abstract future perspective, but is something you encounter every day.

On my last trip, as I was leaving Greece, I picked up a copy of Kathimerini, one of Greece’s more serious bourgeois newspapers, and the headlines of just one day bring out the dire situation being faced by many ordinary working people.

One article, Taxes and recession slash income of Greek households, pointed out that,

“The avalanche of new taxes that began this month will deal a devastating blow to household incomes, consumption and the prospects of the Greek economy in general… All this is expected to extend the recession and deter investment, while leading to more business shutdowns… the disposable income of households will shrink anew due to the increase in taxation and the hikes in almost all indirect taxes and social security contributions. Hundreds of thousands of families are cutting down on their basic expenses while many have run into debt over various obligations: For example, unpaid Public Power Corporation bills now total 2.7 billion euros…”

And most significantly it ends with,

“…eight out of 10 Greeks are constantly attempting to reduce their household expenditure. Their main targets for cuts are going out for entertainment and food delivery, while they are buying cheaper and fewer groceries.”

This news about families cutting back on groceries, i.e. food, is explained in detail in an article that appears right next to it, Value of supermarket sales posts record decline of 8.8 pct in March. It is worth quoting at length from this article as it highlights the real suffering of ordinary working people in Greece today:

“The first three months of this year proved to be one of the worst quarters ever for the supermarket sector in Greece, as the value of sales declined by 7.8 percent from the same period in 2015.

“(…) the fall in demand, as sales volume posted an 8.6 percent drop compared to the first quarter of 2015. Consumers are cutting down on even the most basic of commodities, ranging from milk to washing powder. [My emphasis]

“(…) Sales value fell 6 percent in January year-on-year, followed by an 8.3 percent drop in February and topped by an 8.8 percent slump in March…

“(…) In March supermarkets saw their sales volume shrink by 13.5 percent year-on-year, which was also the biggest drop in one month recorded since 2013. In February the drop was 11.7 percent and in January 11.2 percent.

“(…) Turnover dropped further in food, shrinking by 8.4 percent in the first quarter of 2016 from last year…

“Sales volume in food plummeted a remarkable 13 percent in Q1…

“(…) the fall in the value and volume of sales in basic categories such as dairy products is quite striking: Dairy goods saw their sales volume lose 10.9 percent from Q1 2015, and sales value fell 8.9 percent.”

When we have such a dramatic fall in the sale of dairy products we can see how bad the situation is for the workers and poor in Greece. It means that in some families we have the beginnings of malnutrition! In fact, on a previous trip I read about children fainting in classes because they had not had breakfast.

This is what austerity means for working class people. It is not just about cutting back on entertainment and other “luxuries”. According to the OECD 1.7 million Greek people, almost 20% of the population do not have enough to eat. People are eating less and what they eat is of deteriorating quality. It is the health of a whole generation that is being affected here.

Four years ago we started hearing of reports of malaria cases that were not of people who had travelled to tropical malaria-infested countries, but of people infected in Greece! In the 1950s and 1960s a widespread campaign managed to eradicate malaria, and in 1974 Greece was classed as malaria-free. Massive cuts to healthcare spending have been a contributing factor to the re-emergence of malaria. Back in 2013 the then government announced plans to close 50 of the 132 hospitals in Greece. The cuts have meant that about 30% of the Greek population has been pushed below the poverty line, and have no access to affordable healthcare.

In the same edition of Kathimerini quoted above there is another short article, Survey shows 8 in 10 Greeks feel measures were off target, which states the following:

“Eight in 10 Greeks believe the government’s policies are taking the country in the wrong direction, with seven in 10 saying their personal financial situation is degenerating as a result of recent reforms.

“…only 2.5 percent saying they believed the reforms targeted rich and privileged Greeks, in line with the government’s pre-election pledges.”

All this is the concrete result of the austerity measures imposed on Greece. You cannot cut wages, jobs, pensions and public spending and then expect the market to expand. And what is the solution to all this being proposed by the EU and ECB? Yet more austerity!

Greek workers and youth rejected all this when they voted SYRIZA into government in January 2015. And they made their opinion abundantly clear when they voted NO [OXI] in the July referendum. Then Tsipras ignored the will of the people and buckled to the pressures of the EU. He managed to win again in the September elections with the promise that with him in government the pain would be less. Instead we have austerity and more austerity. All this explains the massive fall in popularity of Tsipras and the SYRIZA government. But more on this in a future article.

This is what is happening now. Imagine what would happen to people’s living standards if the George Soros medicine is applied, as outlined in my previous article!