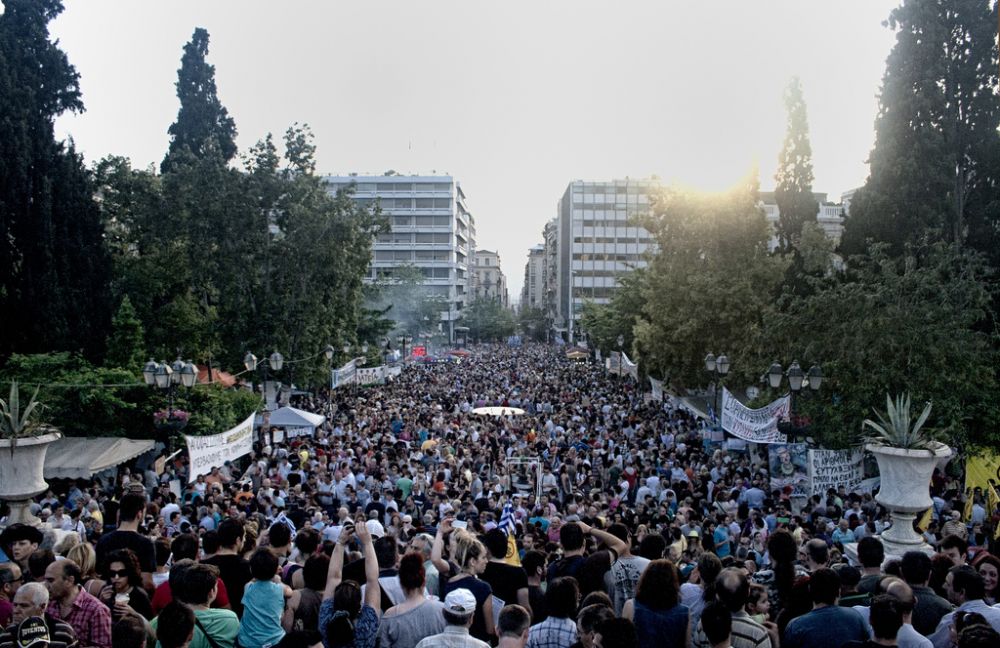 The strategists of international capital are finally coming round to the idea that a new bail-out for Greece is necessary. With it comes an even harsher “memorandum” for the workers, involving the infamous “medium term programme” already announced by the government, which includes draconian austerity measures and the selling off of state assets. But now the labour movement is beginning to put its imprint on the situation.

Why a new loan?

The international usurious banking lobby that has interests in the Greek bonds market is increasingly concerned about the possibility that it could incur losses on their “investment” in Greek debt. The Greek state is burdened with a mountain of debt totalling €112 billion payments on which mature between 2012 and 2015, an impossible debt to service properly without further borrowing. In 2012 alone Greece must find €27billion and a further €38billion the following year. These amounts are not covered by the existing loans provided by the “troika” [the European Commission, European Central Bank and IMF].

Here we see how the big usurers, through their international representatives, such as the IMF and the ECB, during the last few days have been putting tremendous pressure on European bourgeois governments to immediately approve a new loan package for Greece, in order to protect their profits by avoiding either a “restructuring” or a “controlled default”, which would lead in one way or another to a reduction in the value of the bonds they hold. They have even resisted any extension of the bonds that mature in 2012 and 2013, spreading the idea that this would “destabilize” the global economy and threaten the “liquidity” of the international financial system.

It is in this context that one should view the categorical statements of the president of the ECB, Jean-Claude Trichet, who has ruled out the possibility of restructuring the debt or of a controlled default. Even the possibility of an extension of the payments, according to Trichet, should only be considered as a “last option”, and even then “only with the consent of creditors."

On top of all this we have the German parliament that has voted a motion on the second loan package to Greece that stresses that a prerequisite for the new loan is another round of austerity and privatizations in Greece and “the involvement of private investors”. This last point the German government has been insisting on for some time now and it reflects the thinking of the more far-sighted bourgeois circles in Germany, who have no trust in the ability of the Greek government to properly serve its debt and who fear that a Greek default would be off-loaded directly onto the national budgets of other European countries and above all, of course, onto the shoulders of the German state budget. [Note: The latest news is that the troika has indicated that a privatization agency with an independent board, to which the European Commission and eurozone countries could nominate members, would soon be set up.]

Last week in a meeting with Angela Merkel, Barack Obama insistently argued in favour of a new loan for Greece, in order to avoid default. The reason why Obama is so concerned that Greece should meet all its loan requirements – apart from the direct exposure of US banks to the bonds of highly indebted countries in Europe – is the same that is worrying the German bourgeois. That explains why with a “cold heart” they have consented to a further loan to Greece. They view with trepidation the prospect of an uncontrolled European and global domino effect of banks collapsing and countries defaulting that would be the consequence of a Greek default and the disruption this would provoke in the already precarious international monetary system, that in turn could push the whole of the world economy into the abyss of a new and deeper recession.

But as we have already explained, the granting of a new loan does not solve the problem of Greek debt. It simply grants a small extension to private moneylenders, until most of the debt is concentrated in the hands of the “troika”. On the contrary, the new austerity measures that accompany the new loan will consolidate and deepen the recession in Greece and therefore the debt as a percentage of GDP will remain at a high level, merely postponing the default to the near future and giving it a more acute and uncontrolled character.

At the same time, the new loan to Greece will exacerbate conflicts within the EU. One should not forget that apart from heavily indebted Greece, there are (currently) also indebted Ireland, Portugal and Spain. The new Greek loan – once eventually granted – will create a new precedent for those countries whose “spreads” already are, or are becoming, increasingly prohibitive to access the markets. A tendency to grant evermore new loans will be a permanent source of conflict within the EU member states over whether these loans can actually be effective and over who will bear most of the burden to cover them.

And since the indebted “sick men” of Europe will only be able to “contribute” to the EU with more debt, recession and increasingly “fashionable” revolutions, at some point the “tap” of the loans will be turned off and they will be probably be pushed out of the Euro.

This scenario is likely to hit Greece at any time in the coming period as a result of the uncertainty in the country produced by the explosive combination of deep recession, political instability and turbulent class struggle, regardless of whether the new loan is agreed or not.

The PASOK government is trying to exploit the prospect of a new loan, presenting it as a “national success". But we have to stress once again that this loan will not be granted in order to pay salaries and pensions. The current needs of the public sector are in fact covered through taxation and the issuing of treasury bonds with short term, mainly internal, lending. The new loan will be used exclusively to service the mature bonds, i.e. to pay the usurious private lenders.

The working people that have been demonstrating for more than two weeks in the main squares of Greece’s cities can no longer tolerate any more such games. They are determined not to suffer further sacrifices for the sake of the usurers and are looking for a radical solution that would release them forever from the yoke of debt, poverty and unemployment.

Economy at a standstill, government out of touch with the public

As each day passes the government is sinking more and more into the swamp of Greek capitalism’s economic impasse in the midst of the rising tide of popular indignation.

According to a report of the Hellenic Statistics Authority (ELSTAT) published on June 9, Greek GDP fell year-on-year by 5.5% in the first quarter of 2011. The Index of Industrial Production for April fell by 11% year-on-year, falling by as much as 25% compared to 2005! Total expenditure on consumption fell by 6.9% as a result of the collapse in the purchasing power of the masses, while unemployment reached 16.2%, bringing the number of registered unemployed to 811,340, in a country of around 11 million people.

At the same time, the government is facing loss of confidence, both from its parliamentary group, and from the bourgeoisie itself. The PASOK's parliamentary group meeting a few days ago provided a picture of Members of Parliament terrified that the popular unrest could be putting at risk their political careers, and thus they are starting to oppose the government in order to save their skins.

This picture of a government in disarray has angered the bourgeoisie. A prime example of this is the unprecedentedly bitter comment of Alexis Papachelas in Kathimerini on June 8:

“...The people do not respect politicians that mutter indecisive excuses... A friend gave me a sticker that would be good for the politicians to put up somewhere in their offices: ‘What do you call a cockerel that fears the rain? A chicken.’ They are chickens, and dangerous ones at that...”

The bourgeois “centre-right” parties are beginning to distance themselves more and more from the government. The leadership of New Democracy is trying to avoid being sucked into this “consensus politics”, putting up token opposition in an attempt to salvage what they can of their flagging electoral appeal so as to remain a useful B-team for the bourgeoisie, while LAOS [a small extreme right-wing party] and Dora Bakoyannis’ Democratic Alliance [a small party founded in 2010 from a splinter group of the New Democracy party] are both calling for early elections.

The movement of the masses in all the main squares is the determining factor in the latest political developments. The Greek ruling class is truly terrified of the revolutionary connotations that the movement is assuming. The mainstream media throughout last week engaged in a hysterical defence of “parliamentary democracy". In reality what this amounted to was a defence of the “democratic right” of the bourgeoisie to lie and deceive the masses.

The publisher of the daily newspaper “To Vima”, Mr. Psycharis, last Sunday expressed the reactionary plans of the ruling class by sending the people in the squares a barely veiled threat of a coup d’état:

“What happens if the revolution starts? Summer Palaces or even Winter ones no longer exist. A substantial disruption of public order would lead inevitably to violent overthrow or armed combat. Within society there are people who want the general bringing down of its structure. They obviously cannot impose this because the vast majority of the people DO NOT want this. However, under certain conditions that can lead to such disorder what will be required are extraordinary measures. This means a diversion from the constitutional order...”

The labour movement comes to the fore

Undoubtedly, the most important new development in recent days has been the powerful intervention of the labour movement which has placed itself at the head of the struggle. With the workers having gained inspiration and confidence from the mass movement in the squares, different sections of the labour movement have launched a counterattack and are now objectively posing as a leadership for the revolutionised masses.

Last Thursday there was a public sector strike which paralysed the country. Also GENOP-DEI (the workers’ union in the electricity company DEI) decided to launch repeated 48-hour strikes, while the POE-OTA (local government workers’ union) became the first mass workers' union to support the idea of calling an all out political general strike.

The government is now weak and the final blow must be struck! We should not wait for the day when parliament votes on the new bill at the end of the month. The occupation of the squares and the encirclement of the Houses of Parliament are useful weapons, but the “heavy battalions” of the labour movement must be mobilised, starting with the 24-hour general strike called by the GSEE-ADEDY [private and public sector trade union confederations] for June 15.

So far the method adopted by the trade union leadership has been that of periodic 24-hour general strikes without any escalation in the struggle, combined with general demands and abstract requests. What is required now is an all out general strike with the clear political objective of bringing down this government that is defending the interests of the usurers and to replace it with a new one. Such a government can only come about as a result of the mass movement of the workers, and its task would be to cancel the repayment of the debt and take over the commanding heights of the economy as the only way of putting an end once and for all to the nightmare of poverty and unemployment.