Details
Editorial Board of “Marxistiki Foni”
05 May 2010

As they resort to the “rescue plan” of the EU and the IMF which is usury of the worst degree, the government, the bourgeoisie and their political mouthpieces in the media cultivate a climate of unprecedented psychological terrorism towards the working class.

Every day, they are trying to persuade us that the crisis was caused by the “affluent lifestyle of the Greeks” and its our duty to “lower our standard of living for the benefit of our country”. Never in the last 30 years has there been a campaign with such huge and blatant lies and hypocrisy.

Indeed the crisis was caused by the affluent lifestyle, the lifestyle of the capitalists in Greece and worldwide. It was the greedy and exploitative nature of capitalism in the past decades that plunged the workers into misery on a world scale and led the economy to a dead end.

Greek capitalism is being hit harder by the crisis because it is the weak link within the Euro-zone. Despite the many years of growth in the GDP that brought the Greek capitalists to list of the top profiteers in the world, capitalism showed how parasitic it is, making the competitiveness of the Greek economy worse instead of ameliorating it. During all these years, the vast majority of the Greek workers not only didn't live an affluent lifestyle, but they saw their standard of living drop. The statistics of GSEE before the crisis talked about a standard of living equal to the one in 1984 for the workers in the private sector, while the workers in the public sector saw their wages being shrunk by 30% in the past 20 years. Who can forget that the lowering of the standard of living with continuous austerity programmes since 1985 was implemented in the name of a better future? But instead of that, capitalism is trying to take us back to the interwar period.

And now every day in the media we observe a handful of brazen, with a really affluent lifestyle, politicians, ideological and economic apologists of capitalism who the past years acquired mansions, pools, expensive cars and tax immunity thanks to their services to the bosses, that are trying to convince the poverty stricken, unemployed and heavily indebted mass of workers, that the misery they experienced for years now was an affluent lifestyle and the only way for them now is not only to become poorer, but to literally die of poverty. Because the measures that the enslaved to capital government of Papandreou, with the blessings of the EU and the IMF, ie the international representatives of the big usurers, are turning the pensions and the wages into the “fig leafs” of the mass mizerisation and are removing anything that's left of the already uprooted workers rights, which will inevitably lead to the lowering of the average standard of living of the working masses for the first time after the war.

The other road is socialism!

All the emphasis of the political cheats of capital has in these days is on the attempt to persuade the workers that there is no other way. That the submission to the will of the local and foreign speculators of capital is the only tangible solution. That they should readily accept for the loans to be payed back with their blood because “the country and her prestige with collapse”. That the conditions that diminish the standard of living of the workers that accompany the plan of the EU and the IMF need to be respected and that “we should be happy that at last someone is coming to save us and put us into order”.

In view of this barrage of cheating of the masses, the left needs to show the truth. The government and its international monitors are putting forward the anti-worker measures one after the other, not in order to save the country, but in order to save both Greek and European capitalism from their deep crisis. They are trying to safeguard that the local and foreign capitalists will take back in their entirety the pillaging interest of their loans and they will guarantee increased profits, overcoming their temporary shrinking caused by the crisis.

The left needs to point out that not only there is another road, but never was the other road as relevant and needed as it is today. This road is the one of socialism. Particularly the leaderships of the left and the working class movement need to understand that the most important conclusion of our epoch is the confirmation of the basic position of Marxism: there is no solutions of this crisis that will benefit the workers in the context of capitalism.

This historical period, the Marxist position that the safeguarding and the increase of the standard of living of the vast majority of society is achieved with the adoption of revolutionary measures, is confirmed. Without the socialization of the banks and the monopolies we cannot find the resources for the advancement of society. Without the central planning of the economy we can't avoid the crises and unemployment. Without the democratic control of the running of the state and the economy by the workers, we cannot achieve transparency and meritocracy, and defeat the cancer of corruption and scandals. Without the prevalence of those revolutionary measures from one country after another, we cannot conquer a human-friendly, socialist future for the working class and its children. 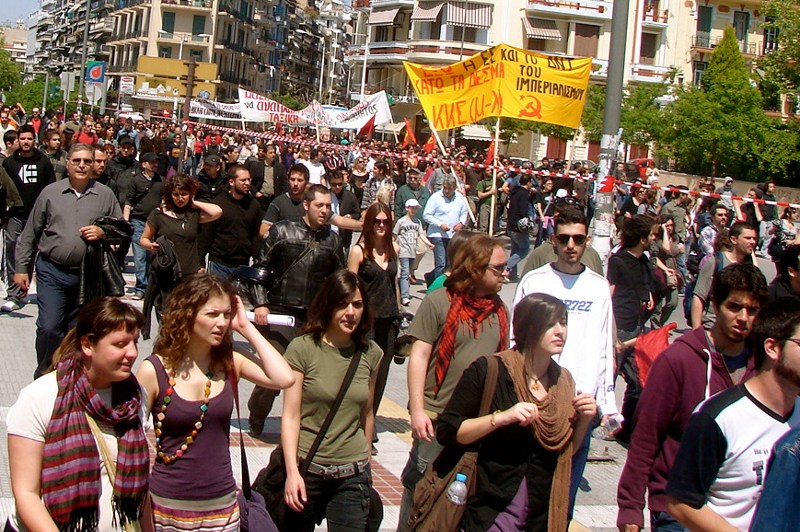 As protests continue, left needs to show way out. Photo from 1 May in Thessaloniki by apαs. The main historical dilemma is today: we are going to advance towards socialism in Greece, in Europe and in the whole world or we will slide back to barbarism. Every other advocacy of “in between measures” and roads, that will supposedly soften the results of capitalist barbarism, equals objectively an obstacle to the advancement of society. When capitalism takes back everything that was won, the only solution is to target capitalism itself.

If ideologically and programmatic the left has a need to extract its answers from the ideas that bore her, the ideas of Marxism, the most basic political duty of this period can be found in the aspirations of the militants in the base. Their basic demand is one: unity in the struggle!

The experience of the last few years is showing that sporadic general strikes without a particular plan of intensification cannot lead to victories. The capitalists and the government of their servants, along with the international monitoring staffs will not move back even with the most massive and militant 24 hour general strike, when this is not part of a planned and enduring struggle. Because they understand that if they give any concessions to the working class they will give an impetus to the movement, so the economic instability of their system will be combined with a revolutionary upheaval that will endanger their rule.

So what is needed is a long-term plan of struggle. The workers struggle needs to intensify and reach to the end. In all workplaces there should be a discussion of a programme of struggle of at least a two month horizon, that will lead to a long enduring general strike until the anti-worker measures of the government are taken back. It's a vital need for all of us to unite in our unions and put pressure towards the defeat of the outrageous submissiveness and passivity of the GSEE leadership and for the unity of the workers of the private and public sector in an unbeatable united force of struggle.

The polls show clearly that the workers under the continuous blows from the crisis are starting to make political conclusions. The climate of tolerance to the measures of the government is overturned in a spectacular manner and the wrath against the government, the EU and the IMF is being spread like wildfire. Despite this, the obstacle that the workers find in their way towards regaining their lost self-confidence and get into the path of political struggle is the non-existence of a visible power solution.

The political alliance of KKE and SYRIZA needs to begin with common action committees in every workplace and every neighborhood. A necessary stage for the forging of this unity is a unity in the coming municipal elections. At the same time, by rebuilding a solidarity relationship within the struggle,the two mass representatives of the left need to be ready at all times to give a socialist power solution to the workers, given the fact that the mass battles that we have ahead of us need to put in the agenda the issue of the replacement of the current enslaved, to the local and foreign capital, government. Thus starting from today, the leaderships of SYRIZA and KKE need to give the response to what will replace it, with the adoption and declaration of a target for the election of a left and socialist government, centered in their alliance. The leadership of SYRIZA, particularly in view of the critical extraordinary congress of Synaspismos, having come out with statements in favor of the unity of the left, has now a duty to the SPECIFIC initiatives in this direction.