Greece
Share
Tweet
The situation in Greece is growing ever more tense with each hour that passes. Today the country is being rocked by a general strike, while the youth continue to mobilise massively. In this situation the state is exploiting lumpen and ultra-left groups to portray the movement as a crazy violent outburst of criminal elements, but the anger of the Greek workers and youth cannot be calmed with these methods.

On Monday morning we witnessed a phenomenon that we have not seen in Greece since the uprising of December 1944. In every town of Greece a total of about forty thousand school students, young 15-year old teenagers, attacked the police stations. In Athens, Thessalonica, Patras, Larissa, Corfu, Komotini' and in many other towns across the country the attack of the school students pinned down the heavily armed and well-equipped police officers inside their stations simply with the use of small rocks, tomatoes and yoghurts! Without any fear whatsoever, thousands of teenagers gave an example of heroic struggle against police brutality. 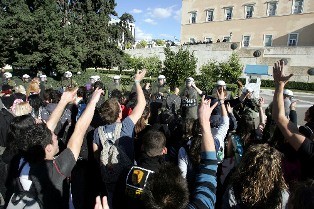 The Karamanlis government took immediate measures to close the schools for one day in the name of "mourning for the young student". In reality what he was aiming at was to stop the students from occupying the schools. On Monday night the government met behind closed doors and as the media reported, some ministers went as far as proposing calling in the army to maintain "public order"! The government has officially announced that it has rejected any such suggestions and is insisting on the "democratic road", while at the same time Karamanlis has announced a series of discussions with the opposition political parties with the aim of creating a common front of "national unity".

In spite of the final outcome and the official position taken, these discussions among the government ministers is a serious warning to the workers and the youth of Greece of what can happen if in the next period they do not build a socialist alternative to the present rotten and barbaric bourgeois power.

The government is desperately seeking points of support in society and on the same night, they found a very useful ally among the desperate and semi-lumpen elements who oblige the government with their blind methods. These groups, with about 2000 people in total, mixed with anarchists, hooligan elements and also infiltrated by police provocateurs, in reality destroyed from the very beginning the massive demonstration of 25.000 people on Monday evening which had been called by SYRIZA, the KKE, University Student unions and school teachers. Without any political logic these elements went on the rampage, smashing small shops together with banks, burning "luxury" Mercedes but also scooters, burning kiosks (small newsagents and tobacconists) and ordinary residences, and they also looted shops, stealing mobile phones, watches and other things. 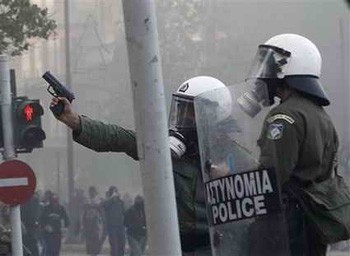 Yesterday, the school students and thousands of people demonstrated all day long in the centre of Athens and after that they attended en masse the funeral of the young Alexandros who had been killed a few days earlier. But the police, not happy at having killed one student, provocatively attacked the demonstrators outside the cemetery. One team of police officers tried to terrorize the demonstrators by shooting many times in the air with live ammunition. All these scenes were broadcast on the TV channels, provoking a new big wave of anti-government feelings throughout Greek society.

The government has tried to exploit this mood of "tension" in society to get today's general strike called off. Karamanlis in fact made an official request to the union leaders to cancel the strike rallies. However, under the pressure of the working class the union leaders have had to reject the government's request. So as we write this short report the working class in Greece is mobilising in yet another general strike, the 10th since the ND formed its government.

The atmosphere in Greek society is electric. The Marxists believe that only the working class in a united class action with the youth, strictly separate from the criminal methods of the lumpen and hooligan elements, can defeat the government and its bosses. All the conditions have been laid for a big victory of the movement and the fall of this government. The forces are gathering whereby a radical transformation of society would be possible. This explains the growth in popularity of all the left parties.

What is missing is a leadership with a clear political perspective, a genuinely socialist perspective for putting an end to the present system which is the cause of growing poverty and with it increasing state violence. The Greek Marxist Tendency is intervening in the movement and raising demands that correspond to the needs of the movement. There is a vacuum on the left and what is required is a clear orientation for the mass left parties of the Greek workers and vanguard youth. The calls must be one for a united front of the left parties, in alliance with the trade unions and youth organisations, whose aim must be to bring down this hated reactionary government and usher in a genuine workers' government based on a programme of expropriation of the capitalist class. That is the only serious answer to the present brutal methods being used by the Greek ruling class.