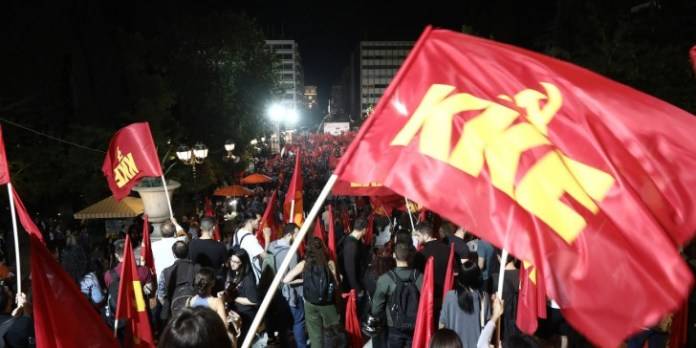 An announcement from the Communist Tendency (Greek section of the IMT) on the 7th July elections.

The only possible way to stop the advance of the ND is a mass class vote for KKE: A mandate to fight for power!

Read the original in Greek |

The reactionary New Democracy (ND) lead by Kyriakos Mitsotakis, having secured victory in the European and local elections, seems ready to take power and intensify the attacks on the living standards of working people, which have been carried out by the Tsipras government over the last few years, through the memoranda it voted for and put into effect. The latter has now reached the limits of what it can accomplish in parliament. Over the last few months, the Tsipras government has been trying to salvage their electoral sway with insignificant concessions to those sections of the working class and the poorest layers of society that were impoverished by the capitalist crisis and the politics that it necessitated. These layers received a few tiny scraps compared to the huge amount that the ruling class and the creditors of their state stole from them over the last few years. At the same time as this politics of meaningless, symbolic concessions to the most downtrodden, which follows a right-wing, neoliberal logic, takes place, the capitalist exploiters enrich themselves, undisturbed by the suffering of the masses. This politics cannot in the slightest, serve to transform SYRIZA into a political expression of the genuine and justified anti-right-wing, anti-ND mood that exists in the working class and the poorest layers of society.

With the choices it made in government, the leadership of SYRIZA has proven beyond a shadow of a doubt that it is a faithful servant of the interests of Greek capitalism. Just as they have voted for memoranda and implemented anti-worker laws from 2015 to 2018, including shamefully voting to tighten restrictions on the right to strike, they will continue to implement these measures once again if they are reelected. The conditions of recession that are taking shape in the worldwide capitalist economy demand the same politics from all the governments that serve and manage capitalism, “left-wing” or “right-wing”: Brutal austerity with the goal of shifting the capitalist crisis onto the backs of the working class. It was the leaders of SYRIZA who agreed on primary budget surpluses until 2060, which are synonymous which brutal austerity. They therefore have neither the right nor the capability to present themselves in any way as an anti-right-wing political force that would stand in the way of the ND as it moves towards taking political power.

Yet the left-wing organisations outside of parliament also cannot be a realistic anti-right-wing choice. Yanis Varoufakis’ “DiEM 25” represents an illusion that was exposed in the first six months of 2015 – that there is a possibility of Greek capitalism existing today without brutal austerity. Varoufakis’s social-democractic, utopian prejudice that with “clever” negotiating tactics and a temporary suspension of debt repayments, the united forces of Western imperialism (the troika) and the Greek ruling class would be forced to accept limits on austerity and a reduction of the debt, creates disastrous political confusion among the working class and the poorest layers of society by focusing on non-existent “alternative” roads to supposed capitalist prosperity. Today however, after the historic defeats of the last few years, the most important political task is to explain that there cannot be capitalism without memoranda and austerity, and that consequently the working class needs to prepare for another period of mass struggle, which will present and resolve the question of class power by means of revolutionary socialism.

A vote for ANTARSYA, LAE or other small, left-wing forces will be unable to achieve essential gains for the struggle and the political perspective of the working class. Their tactic of again and again standing independently in the elections is a very serious mistake. It takes votes away from the only mass political representative of the working class and communism in this country, the KKE, which is needed to reach the – symbolically meaningful – third place in the elections, and beat the corrupt “partner” of right-wing governments, KINAL (“kinima allagis”, “movement for change”, the current shape of PASOK). At the same time, according to the current electoral law, the more votes are taken by the groups that will not make it into parliament, the bigger the parliamentary forces of the strongest party will be. This fact alone should have dissuaded the small left-wing organisations from standing in the elections. After all, every vote for them will in reality increase the possibility of a single-party ND government.

The only realistic anti-right-wing choice today for the working class and the poor is a vote for the KKE, the only mass workers’ party that has programmatically broken with reformism as of the decisions of its last congresses, and which has adopted an anti-capitalist line of fighting for socialist workers’ power. When a mass workers’ party with these political characteristics exists, it is the task of every communist to support it in the upcoming battles. Under the existing conditions of paralysis in the workers’ movement, under which the elections are taking place, this task is even more meaningful and decisive. Electoral success for the KKE, in which it would secure third place (a completely realistic electoral goal), would help the working class back on its feet after the defeats of the past. It would send a vitalising, anti-capitalist message to the broad working masses and it would signify a change in the existing balance of forces, which has not been on the side of working people for years.

Electoral support for the KKE, which is necessary for the working class, does not signify in any way a retreat from the right to criticise the mistakes of the party’s centrist political line. Our organisation has repeatedly shown and patiently explained these mistakes (on our website www.marxismos.com and in our newspaper EPANASTASI). The results of the European elections have shown that these mistakes have affected the standing of the party among the working class and youth in a negative way. However, the period of electoral battle against the bourgeois parties is not the appropriate time to discuss these mistakes. After this battle, there will be time to discuss our criticisms with any comrade from the party who is interested in them in good faith. And in such a discussion we are certain that the prejudices that still exist against genuine Trotskyism among the militants of the party, because of the old campaign of distortions and slanders by the Stalinists, but also because of the bankrupt policies of several opportunist and sectarian organisations that spoke or are speaking currently in the name of Trotskyism, will fall apart.

Therefore, all Communists should unite and fight to strengthen the KKE in the elections! The electoral results in the municipality of Patras, which must be transformed into a fortress of disobedience and mobilisation against capital, have revealed the enormous possibilities that exist for the KKE to not only be an opposition force, but a leadership in the revolutionary struggle for power! This is its historic mission and its main task in our epoch. Forward! With electoral support for the KKE, let us pave the way for workers’ socialist power in Greece, Europe, and internationally!