Greece
Share
Tweet
The movement taking place in Greece demonstrates the enormous power of the working class and youth. But it also highlights the weaknesses of the leaders of the trade unions and the official Left parties who have no clear alternative to pose. The task is to build a leadership worthy of the name within the Greek labour movement. 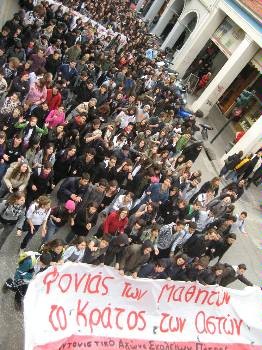 Yesterday we witnessed a big general strike in Greece which expressed the strong support of the workers for the struggle of the school students and the widespread abhorrence at the government's police terrorism. The general strike was bigger than the previous one of October 21. This was reflected in a rally of 40,000 people in Athens' Syndagma Square, under the banner of the GSEE and ADEDY with the participation of many school students. However, the KKE's trade union front, PAME, organized a separate rally in Omonia Square with about 8,000 taking part. The liveliest of the two rallies was the one in Syndagma Square organized by the unions, while the other was more of a party rally than an authentic rally of the workers and the youth.

The students set the tone in the Syndagma rally with their huge enthusiasm and fighting spirit. Unfortunately, the leaders of the GSEE limited themselves to giving three speeches that lasted 45 minutes in total, without announcing any programme of struggle for the immediate future. As a result the workers left the rally with the feeling that their leaders were pushing them to go home and leave the ground free for the police to attack and terrorize the students. In fact, just 30 minutes after the last trade union leader had finished speaking, the police attacked the students once more but the students fought back with rocks and stones. The battle with the police continued until the late evening. Today the school students are once again continuing to mobilize in front of the police stations all over the country. And tomorrow morning another demonstration is planned in the centre of Athens together with the University students.

After four days of struggle we can now start to draw some first clear conclusions. Without any doubt this movement deserves the title of "teenager uprising". We have here a new generation of tens of thousands of school students erupting in a huge explosion, the biggest for 20 years, if not even more, in Greece. We have clear symptoms of an instinctive revolutionary spirit, and a clear tendency to target not only the present bourgeois government but also the bourgeois state and the capitalist system as a whole. 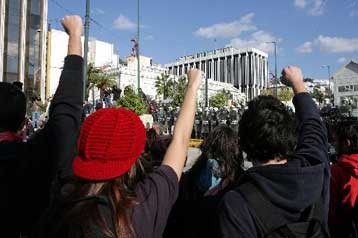 This movement is the result not only of the criminal killing of a young school student - which was the trigger of course ‑ but it is also the result of the big pressure the Greek bourgeois has been putting the working people under for some years, on the basis of the crisis of Greek and the international capitalism. Once again we see how the youth is moving as that sensitive barometer of society and is indicating that even bigger class battles are being prepared in the near future.

The massive participation of the youth and workers in these events together with a fighting spirit against the system is one side of the equation. The other side, however, is ‑ for the moment ‑ the complete absence of clear demands and of any serious coordination. The bureaucratic "coordination committees" promoted by the KNE (Communist Youth) which have controlled the school student movement since 1999 are playing a completely secondary role within the movement and in reality they are being dragged behind the movement, rather than giving it any lead. That is why the Marxists are proposing the immediate coordination of the movement with the creation of elected student committees in every school which will send representatives to a coordination committees at town and national level. These committees should then build a united front with the University students' movement and above all with the trade unions. 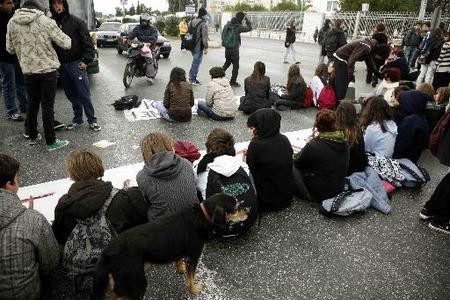 Apart from this weakness, the main problem that this movement is facing is the political attitude of the leaders of the workers' parties and of the trade unions. We already have pointed out that the trade union leaders do not want to do anything concrete to help the movement, apart from a few speeches at rallies. The PASOK leadership completely abstained from the general strike. For the first time Papandreou ‑ although he is raising the demand that the government "must resign" - did not gave any indication to party members on whether they should participate in the struggle. The "official" PASOK leadership is making a clear strand that they are outside the present movement and this is normal because the last thing that the right-wing reformist PASOK leaders want is to come to power on the back of a militant mass movement.

The leadership of Synaspismos, on the other hand, is trying to invest politically in the movement, which is good, but from their behaviour it is clear that they do this mainly as a way of staying high in the opinion polls. This is explained by the fact that as the ND government becomes ever more unpopular, the majority of the workers are turning electorally to the PASOK, as the easiest road to remove the Karamanlis government. The leaders of Synaspismos in practice are taking no concrete initiatives that could give a clear political expression to the movement and also they do nothing to clearly separate themselves politically and organizationally from the anarchists and their counterproductive hooligan methods. 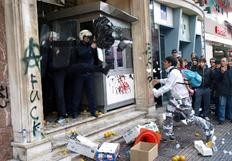 However, what is even more unacceptable is the attitude of the Stalinist leaders of the KKE. They have started a public conflict with the Synaspismos leadership by accusing them openly of "coordination with the lumpen and para-statal elements", which the reactionary pro-government mass media are exploiting in order to present the Left as a whole as simply fighting each other over who will take more votes among the leftward leaning voters. At the same time, the leaders of the KKE are not trying to deal with the real movement, preferring to call party rallies and demonstrations, separate from the rest of the working class and youth movement.

In spite of all this, for the moment, the youth movement continues to grow. Objectively the struggle is a political one. This government must fall and this is the main task that the workers and the youth understand and accept massively, although their leaders are not giving a concrete political expression to the movement. As the movement continues to grow, centred on the schools and Universities and with the active sympathy of the working class, the crisis of the government will become evermore deep. 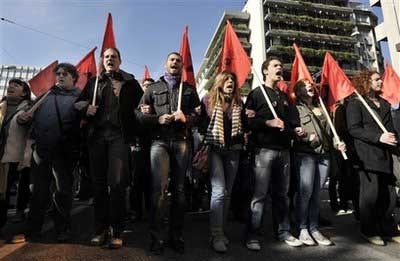 In these conditions, what is required is to coordinate the mass movement and strengthen it, thereby putting pressure on the leaders of the Left parties and force them to take on their responsibilities. There is in fact a huge gap between the objective potential of the movement and the passive stance of the official leadership of the Left parties.

In the last analysis, the only way out of the present political impasse is through a generalized mobilization of the working class and youth for a genuine workers' government with a socialist programme. Only such a government could do justice to the present struggle and achieve a real victory. The task is to put an end to the present barbaric bourgeois power both politically and economically. This is the final solution that we must fight for within the working class movement and the Left.

Many workers and youth will be drawing important conclusions from the recent events. From these will come the forces to transform the mass organizations from their present state and turn them into genuine fighting parties of the working class. That is what the Greek Marxists are struggling to achieve.