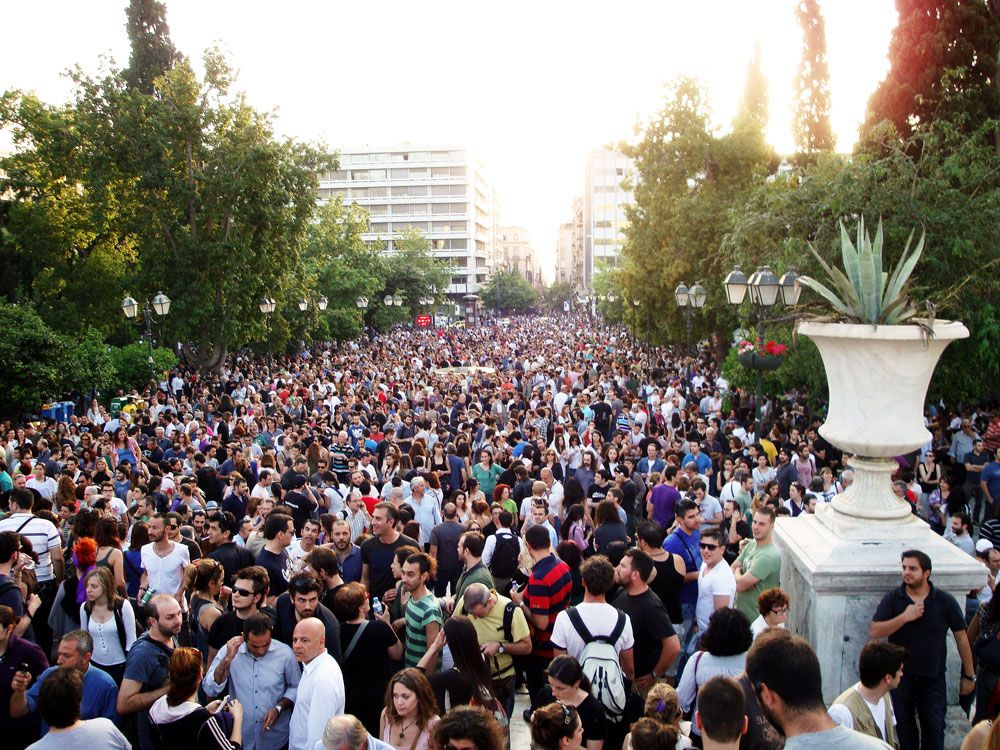 This leaflet was issued as part of the intervention of the Greek Marxists of Marxistiki Foni in the demonstrations over the weekend. We publish it here in English for the benefit of our readers.

We are proud to say that our comrades in Greece were the only organization of the Greek Left that participated in the movement from the very beginning and has been intervening every day in the movement defending Marxist ideas. The Greek Marxists are participating in the movement, not only in Athens but also in Patras, Iraklion, Thessalonika, Komotini, Rhodes.

They are present in Syntagma Square and have addressed the Popular Assembly, despite the difficulties arising from the somewhat chaotic way in which the assemblies is organized. They have also experienced some attacks from some ultra right elements (possibly police agents) but have been protected by the Syanspismos party rank and file members. One of the leading Synaspismos trade union activists said to a member of Marxistiki Foni on Friday : "You little kids have saved the honour of the Left!"

The following is the Manifesto of the Greek Marxists:

THEY ARE AFRAID OF US! ACTION COMMITTEES EVERYWHERE!

The mass movement in the squares of major cities have sowed terror in the government, the directors of IMF/EU and the ruling class. In order to blackmail and terrorize the revolutionized population, they talk about the 'bogeyman' of bankruptcy and the return to the drachma, and they “foresee” that if people do not capitulate, voluntarily accepting the driving down of their standard of living for the sake of the moneylenders and loan sharks, then it will mean that the Greek workers will “return to the Stone Age!” (27/05/11, Real FM, Mr G. Alogoskoufis, ex Minister of Finance)

In a desperate effort to slow down the workers’ movement, they organized a meeting of political leaders, trying to send a message of “national unity” on the basis of the austerity program and of cuts without end. But the avalanche of popular discontent forces the leadership of New Democracy, who are also guilty of crimes against the workers, to hesitate before accepting governmental responsibilities, fearing that they will be soon "burnt out", and useless as a reserve government for the capitalists.

The complete absence of the organized political forces of the Left movement is unacceptable and damaging in every way. The Left leaders - unlike the thousands of ordinary activists of the Left – during all these days when the movement was born in the squares, are playing the role of observers, fearful of the movement of the masses.

In an attempt to justify politically their absence from the movement, they call for certificates of “maturity” saying cynically that this movement will "deflate" (the leadership of the Communist Party), or they agree with the apolitical nature of  some protestors who called for this protest on the internet but are afraid to openly assert political positions intervening creatively in the movement (the leaders of SYRIZA), while the sectarians, basing themselves on isolated incidents with a few protestors holding the Greek flag, characterize the movement as “nationalist” and "reactionary"!

However, the movement in the squares developed as a genuine movement of the broad masses and this awakening, in addition to its anger and militancy, naturally carries as “baggage” all the political and ideological prejudices on which they have been nurtured during the previous period (political confusion, negative opinions of all parties, patriotic illusions). It is through participation in the movement itself that the masses will learn through living experience not to trust the patriotic tales of the bourgeoisie and their politicians. They will seek deeper answers to the ills of capitalism and the current first phase of the "inter-class” moods of revolt and the lack of specific political demands will be overcome. The movement will start to get clear class and acquire political characteristics.

Already the movement is beginning to realize its power. The thousands who gathered understand that they are the most decisive factor in the political developments. But as we have already stressed, the occupation of large squares of cities by thousands of angry people is not enough. We need to make an organized, tactful but decisive contribution to the working class struggle. What is required are the historically developed weapons of struggle for social change; well-organised and united strikes and general strikes, powerful demonstrations, occupations of factories and workplaces and above all the revolutionary ideas and programme of Marxism. Only through the development of revolutionary political subjective factor will the movement end in victory.

All out on the streets against the united bandits of Capital and their lackeys!