Greece
Share
Tweet
On Thursday, April 2, in Greece there was a general strike. A mood of distrust of the trade union leadership emerged in the discussions with the workers. On the other hand all the workers participating in the demonstrations expressed a desire for an escalation of the struggle. 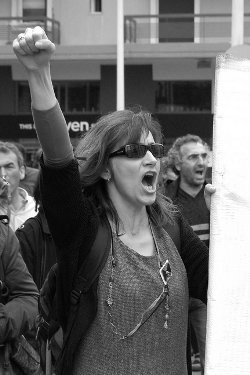 On Thursday, April 2, in Greece we witnessed the 11th general strike since the ND (New Democracy) took office in 2004. Of the most recent general strikes this was the biggest, with a larger participation and bigger demonstrations than the previous general strikes of October and December 2008.

The general strike was called by the GSEE (Greek Confederation of Private Sector Workers) and ADEDY (Public Sector) against the present wave of sackings and violations of workers’ rights and also against the government’s announcement that in 2009 the Greek workers in the public sector and the pensioners will not get any increase in their wages and pensions.

The main slogan in the rallies was, “We will not pay for the crisis!” In Athens in the joint GSEE and ADEDY [Unions controlled by PASOK, Socialist Party, and SYRIZA] demonstration 45-50,000 people participated and in the PAME [Unions controlled by the KKE, Communist Party] demonstration more than 10,000 people participated. Rallies were organized in more than 60 towns across Greece.

There was a very strong presence in the rallies of industrial workers from many factories where the bosses are announcing job cuts every day and also demanding of the workers they accept a cut in hours and wages. This big participation comes after the strikes and demonstrations that we have seen in many industries over the past months.

The mood among the workers on the demonstrations was very militant and the element that dominated was one of anger against the bosses and the government. Lack of enthusiasm towards and a general mood of distrust of the trade union leadership of both GSEE and ADEDY emerged in the discussions with the workers. On the other hand all the workers participating in the demonstrations expressed a desire for an escalation of the struggle.

This general strike is the result of the open class war that the Greek bourgeoisie has declared against the workers with its desire to deepen and intensify the exploitation of the workers. For example, the company belonging to I. Mylonas, the President of the Industrialists of North Greece, “ALUMIL”, cut both wages and hours although the company’s profits rose by 10% in the last quarter of 2008. Also in another engineering company, “NEXSANS Hellas”, we have seen sackings and layoffs, although the company has officially announced the target of increasing production for the coming period.

This action on the part of the bosses further underlines the utopian nature of the GSEE leaders’ tactics over the previous 2-3 months where they have attempted to make deals with the leaders of the SEV (Union of Greek Industrialists) to “find a common position against the crisis”. Unfortunately for them reality has disturbed their plans. The wave of sackings and the militant mood that is growing among the workers have forced the union leaders to call yet another general strike against their will, with the possibility of another general strike being called in the immediate future. 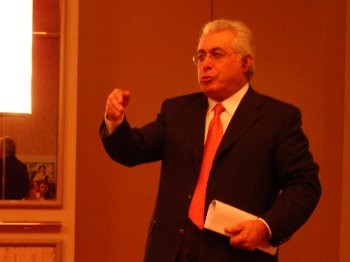 Aristotelis Pavlidis, Minister of the Navy, is under accusation of corruption but refuses to resign. Photo by Buthaina al-Othman on Flickr.

As we write this report the Greek Parliament is discussing yet another big scandal involving the right-wing Karamanlis ND government. Aristotelis Pavlidis, a Minister for the Navy, has been accused by a ship-owner of blackmail for 300,000 Euros for the “marriage dowry” of the minister’s daughter. The ND government only has 151 MPs out of a total of 300 in parliament. Therefore if Pavlidis refuses to resign from his MP’s position, as Karamanlis has asked him to do, the government would lose its majority in parliament. Pavlidis has already refused to do so, but now the pressure from the bourgeoisie – as every one can understand – is becoming very big. We have to remember that already one ND Member of Parliament, Petros Tatoulis, who has openly denounced the government of corruption, has refused to resign, reducing the ND majority from 2 to only 1 MP.

The Karamanlis government is the most corrupt government in the recent history of Greece. And also, as the opinion polls indicate, it is one of the most unpopular. The only reason for the survival of this government after so many big movements of the workers and the youth is the unwillingness of the political and trade union leaders of the working class to organize a well prepared and coordinated, united struggle with the clear demand for a workers’ government.

Recent opinion polls indicate the PASOK stands at 5 percentage points ahead of the ND, 33% against 28%. However, it is also true that the PASOK is still 2-3% percentage points below what it received in the last elections and it seems it would emerge without enough seats to govern on their own. This is a reflection of the very mild opposition of the Papandreou leadership against the present government and also of the pro-capitalist policy announcements of what a future PASOK government would implement.

Meanwhile, the KKE leadership, after its recent national congress where they officially reaffirmed Stalinism as the heritage of the party, is continuing to escalate its sectarian, “Third Period” style policy and its leadership seems to be satisfied with its 7-8% percent support revealed in the opinion polls. What is missing in the party is a strong organized left opposition. A period such as the one we are in provides huge opportunities for a genuine left opposition. The forces of the KKE should be increasing day by day. The fact that the KKE is not increasing its forces, both within the labour movement and within society as a whole, is a reflection of the impasse that the total Stalinisation of the party represents. In a period when the workers and the youth are looking for a clear banner for their struggle, the KKE leaders limit themselves to justifying the crimes of Stalinism and offer no real way out in the present situation.

At present the more serious developments within the Left exist in and around SYRIZA (the political front made up mainly of the SYNASPISMOS, a party that emerged from a previous split in the KKE). Unfortunately, as a result of its “soft” left social-democratic policy, the new SYNASPISMOS leadership has disappointed the expectations that many workers and youth had, expressed in big percentages for the party in the opinion polls (17-18% last year) and that explains why now SYRIZA is only expected to get 5-6%. As a result the right wing of SYNASPISMOS is trying to use this as an excuse to openly pose the question of the dissolution of SYRIZA and of a turn to a more social-democratic policy. Instead of understanding that the reason why they have fallen back in the polls is there unwillingness to move decisively to the left, they draw the opposite conclusion! The right wing of the SYNASPISMOS is in fact attracted towards the PASOK, and would like to form a joint government, but unfortunately on the programme of the PASOK.

The main political perspective in these conditions is therefore that sooner or later a new PASOK government will be elected to power. But the present PASOK leadership has a policy based on the needs of the bourgeoisie and therefore, in the present environment of a deep crisis of capitalism, it will very quickly disappoint its voters. This will be the signal for an even more left turn inside the Greek labour movement and inside the mass workers’ parties, which will lay the basis for the building of a mass Marxist tendency in Greece in the next period. This is the task which the Greek section of the IMT and its journal “Marxistiki Foni” are dedicated to accomplishing over the coming years.