Greece
Share
Tweet
The Editorial board of the Marxist journal, Marxistiki Foni, has just published a Greek language edition of Lenin and Trotsky - What they really stood for. It is dedicated to the memory of the founder of the International Marxist Tendency (IMT), Ted Grant. The book is now available to order.

The long awaited Greek edition of Lenin and Trotsky - What they really stood for is finally in our hands and is available for sale.

It was written in late 1968, as a reply to Monty Johnston, one of the main theoreticians of the Communist Party of Great Britain, who, through the columns of the Communist Youth journal, had mounted a campaign of distortions of the work and the historical role of Leon Trotsky. 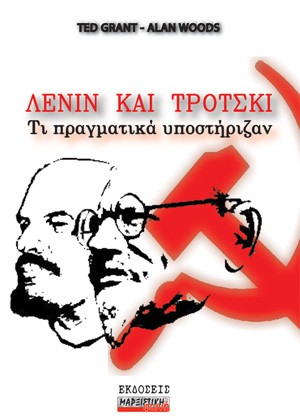 The authors of this book re-establish the truth about the ideas of Trotsky and their relation to genuine Bolshevism, using solid, unquestionable evidence and arguments. They prove that the two great leaders of Red October, Lenin and Trotsky, had the same ideas on the vital questions of the Russian and the world revolution.

Through the pages of this book the reader can follow and learn about the real developments within the Bolshevik party and learn about the very essence of the theory of the Permanent Revolution, which was so much distorted by the Stalinists. One can also find a critique of the anti-Marxist, anti-Leninist idea of so-called "socialism in one country", which was invented as a theoretical support for the Stalinist bureaucratic cast. There is also a well-documented Marxist analysis of the bureaucratisation of the former USSR and of the reformist degeneration of the leadership of the International Communist Movement.

This Greek edition also includes an appendix of Alan Woods' short piece on Lenin's suppressed letters. In this appendix there are some writings of Lenin, which were suppressed by the Stalinists. Some of them came to light only in 1994.

The book Lenin and Trotsky - What they really stood for has come out in Greek in a period when big sections of the youth are looking for genuine revolutionary ideas, a period of intensification of the class struggle which will push even the older generations to discover the real ideas of communism. The publication of this book in Greece meets the challenges and the duties of our era and for this reason it should be read by every revolutionary youth and worker.

The publication is dedicated to the memory of the founder of the International Marxist Tendency (IMT), Ted Grant, who died in the summer of 2006. The book was translated by Panagiotis Sifogiorgakis. The editorial work was done by Stamatis Karagianopoulos and the book cover was designed by Orestis Doulos.