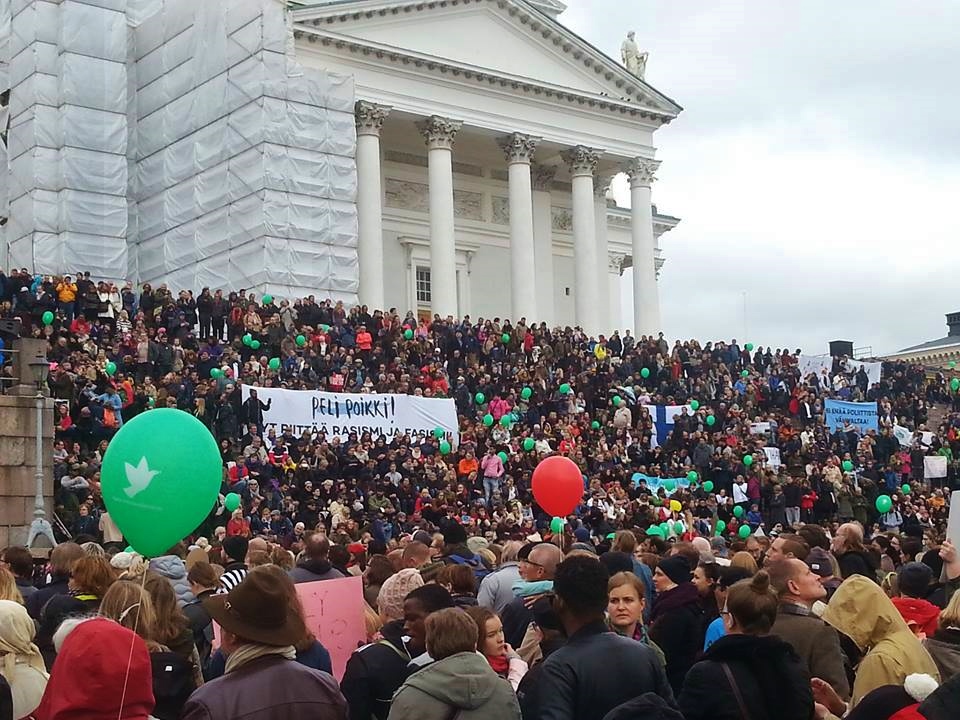 At least 15 000 people gathered on the Senate Square in Helsinki, Finland on saturday, September 24th to demonstrate their utter disgust at the nazis of the so called Finnish Resistance Movement who had the same month assaulted and beaten to death 28-year old Jimi Karttunen. Karttunen had courageously objected to the propaganda in the leaflets handed out during a street activity by the group, but his protests were met with the use of deadly force.

The murder has caused a wave of anger, debate and demands for action against the forces of organised racism, whose unhindered rise has in recent years been a source of wrath, frustration and fear for the Finns. Even former president Tarja Halonen spoke at the rally on Saturday, one of several organised around Finland, and one of the largest ones in a long time in the country.

The FRM is the local section of a network directed by the violent Swedish nazi sect known as the Nordic Resistance Movement. The group, whose ideology worships violence as a political tool and loathes democracy, has for a long time used the tactic of physically assaulting those opposing their views during their rallies. It has also attacked several events by the Left, the best known incidents being the tear gas attack on left-wing politician and author Dan Koivulaakso in Oulu in 2012, and a knife attack on the launch event of an anti-fascist book in Jyväskylä the same year. Indeed, it was only a matter of time before there would be casualties.

Although it is at a very low level there has been a relative rise in Nazi activity in Finland in the previous period. A major reason behind this has been the shift in public discourse caused by the successes of the far right populist Finns party. The party, which contains a strong, openly racist faction, managed to successfully portray themselves as an alternative to the establishment while in opposition to the former government - which was responsible for historic austerity measures, and where the traditional workers parties participated under the leadership of the centre-right, liberal-conservative National Coalition party.

The new right wing government, which includes the Finns party, has further limited the country’s already low level of refugee intake. Also the social democracy, under leaders such as Jutta Urpilainen and Antti Rinne, have made opportunist statements, pushing for harder integration demands on immigrants, and implying immigration threatens jobs. But as the Finns party took the step out of opposition and into participating in the cuts of the right wing government, their populist slogans were quickly exposed as empty. The support of 17,7 percent that they received in the elections has shrunk by half in the most recent opinion polls. In an attempt to get attention and turn the dwindling figures around, there has been an increase in xenophobic moves and statements from the party’s representatives, with MPs and councillors spotted side by side with FRM nazis at events.

Demands are now being raised for the nazi organisations to be banned, and for increased authority for the state to act against "extremists". But there is a substantial risk that such laws could be used arbitrarily also against anti-racists - and the fact of the matter is that the police could easily already under present legislation stop the nazi’s violence and incitement against minorities, if that was in the interests of the bourgeois state.

The way the assault on Karttunen was handled by the police demonstrated that they neither bothered to intervene, nor tried to catch the assailant. Despite the nazis themselves posting a video on YouTube bragging about the deed, the police claimed a week later still to be looking for the killer - he eventually turned himself in on September 17th, a week after the attack and a day after Karttunen had died of his wounds.

In today’s context of capitalist crisis the ruling class is not able to offer real reforms to raise living standards, but instead is forced to cut and attack the working class in order to maintain its own profits and privileges. Thus it resorts to racism to divert the attention of the workers, and prevent them from uniting on a class basis. It is this context which has led to the opening up of some room for racists and fascists to manoeuvre in. In reality however, this reveals the weakness of the ruling class whose parties are losing legitimacy. All of this is preparing a convulsive period of class struggle. The fascist threat must be met with independent working class organisation in defense against right wing politics, racism and fascism. This struggle can only be won through a serious fight against the Capitalist system which nourishes them.