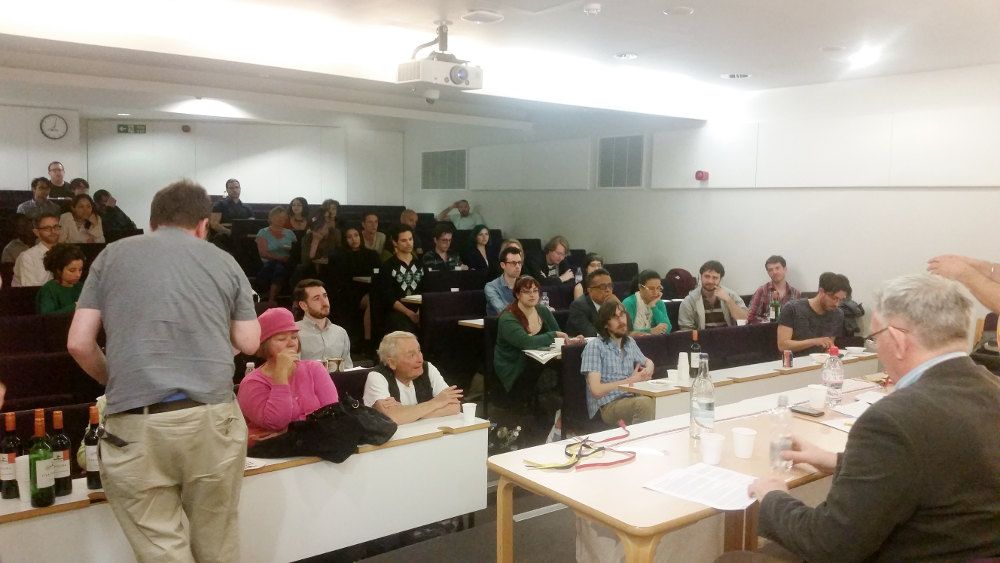 Over 50 people attended the premiere of the Telesur documentary “Hugo Chavez: a portrait from Europe” and discussion on the recent sanctions levied by American imperialism against the Bolivarian revolution on Wednesday April 15th. Speaking were the director of the film, Pablo Roldan, and Alan Woods, editor of In Defence of Marxism (www.marxist.com). The event was co-organised by Hands off Venezuela and the Marxist Student Federation.

Pablo Roldan first spoke on the inspiration behind the film. He explained that in 2006, Chavez came to Vienna for a EU-Latin America/Caribbean summit. Hands off Venezuela organized a solidarity meeting for Chavez to speak at, but as the President of Austria organized a dinner that same night, they did not know if Chavez would show up. The organizers of Hands off Venezuela really began to panic as thousands of people poured into the venue wanting to hear from the leader of the Bolivarian revolution. Finally, Chavez arrived. He was greeted by 6000 ecstatic European supporters of the revolution in Venezuela. This event, along with a similar event in London, in which Chavez spoke for 5 hours, made Roldan wonder why Chavez was such an inspiration to Europeans. 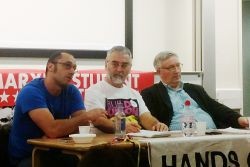 After Roldan spoke, the lights dimmed and the film began. The film explains quite clearly why Chavez has inspired so many working class people around the world. Chavez was the product of a genuine revolutionary process in Venezuela. For decades, Venezuela had been governed by a repressive and parasitic oligarchy that had never attempted to improve the lot of the Venezuelan working class and poor. The election of Chavez meant a break from this. Chavez openly talked of revolution; of doing away with capitalism and building socialism. He built hundreds of thousands of homes for the poor, created a universal healthcare system and instituted free education amongst other social programmes. This served as a huge inspiration to European workers, who only see their leaders talk about the need to be responsible managers of capitalism. 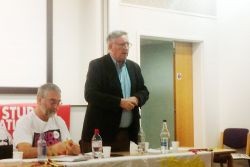 Alan Woods spoke on the Bolivarian revolution and the recent sanctions imposed by the US after the film. He explained that the “threat to the national security and foreign policy of the United States” that Venezuela poses, as Barack Obama said, is not a military threat or anything of that sort, but the threat of a good example and a threat to the profit margins of American multinationals. Woods explained that we need to defend the gains of the revolution from American imperialism. However, he said that Chavez had only made half a revolution, and that the revolution must be completed by expropriating the capitalists, who are actively sabotaging the economy and conspiring against the government. Woods stressed that if the capitalists are not expropriated, they will eventually crush the revolution. Turning back to Europe, Woods concluded by stating that if Chavez were at the discussion, he would say that the best way you can show solidarity with the Bolivarian revolution is by fighting for revolution in your own country. 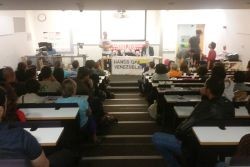 The talk was followed by an excellent discussion on the situation in Venezuela. A young person from Venezuela, speaking from the floor, argued that the revolution had brought chaos and violence to Venezuela. Others in the audience responded by explaining that the chaos and violence was the responsibility of the capitalists, who are actively sabotaging the economy and instigating violence against the government and revolutionaries.

In all, the event was a great success, concluding with chants of “viva la revolucion!” Hands off Venezuela will continue to hold solidarity events until the revolution is victorious.