Details
Our correspondent in Budapest
19 February 2016 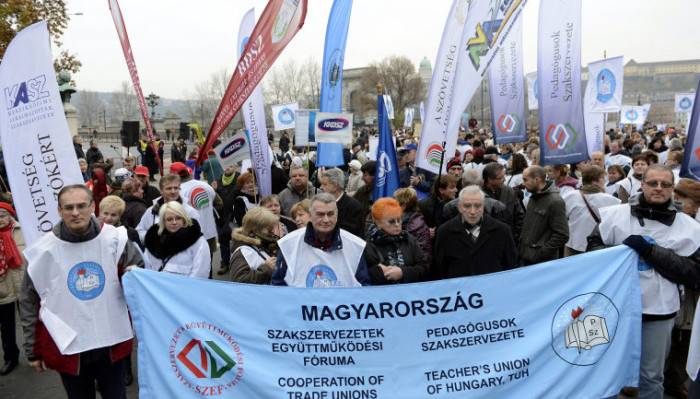 The 13th of February 2016 is likely to go down in history as the awakening of the working class and the beginning of the class struggle in 21st century Hungary. Tens of thousands of people gathered in front of the Hungarian Parliament building demanding the abandonment of all educational “reforms” of the last 5 years.  In spite of pouring rain thousands and thousands marched proudly, showing concern not just for education, but for the health service, for transport, against corruption and what is now commonly called the “mafia state”.

For the first time in a very long time, support for the teachers came from a wide variety of sectors, from local government workers, health workers, transport workers, miners, police personnel and even soldiers.  Banners all over the square showed the support of official and unofficial unions and individuals with hand written slogans. The atmosphere was friendly, comradely and very, very supportive of the cause and to each other.  Speakers came from all spheres and were heard with enthusiasm and applause.  At the end of the rally Mária Sándor, the “nurse in black” called for a 5 minute silence, which was observed with reverence for this courageous woman, who was persecuted and lost her job last year for openly pointing out the downright dangerous state of many Hungarian hospitals. She stood alone then, but was cheered loudly on the rostrum on the 13th. This showed the government the resolve and unity of a crowd which intends to make them listen.

Mária SándorThe origins of this movement go back to last year, when the Hermann Ottó High School in Miskolc, issued an open letter to the government, enumerating their complaints over the destruction of democracy in education and the ill effects of the government’s so called “reforms”, which included falling plaster in classrooms, lack of books and even of chalk and paper. It listed 25 demands calling for the return to local democracy in schools, the abolition of the KLIK, the government’s centralised organisation overseeing education, for sensible teaching and learning hours that do not exhaust either children or teachers, reduction in the content of the National Curriculum, for teacher autonomy in the method of delivery, the return of the billions of forints which were syphoned off from education etc., etc. The KLIK, put together on a partisan basis, containing only FIDESZ party hacks, few educationalists and real experts has since become a focus of special hatred by the teaching profession. Not only has it no experts in its ranks, it has become known as a completely amateur outfit that could not organise a single lesson, never mind the whole education system from one or two offices in Budapest. Echoes of Stalinism abound through its bureaucratic inefficiency, centralised bigotry, lack of professionalism and an overuse of dictates from above.  No wonder, even totally non-political as well as some FIDESZ members of the teaching profession are totally united with the rest in the call for the instant abolition of this disgraceful organisation.

Viktor Orbán’s FIDESZ government have been treating the teachers the same way as they have all government workers: with disdain, sham consultations, unwillingness to listen, with dictates from above and especially with an iron hand trying to reintroduce the old Teutonic system of learning by rote, recalling facts, against free will, free opinion or thinking by either teachers of their pupils. In other words, it seems to want nothing but an unthinking and obedient workforce that will never challenge its authority.

An unprecedented unity between teachers, their pupils and their parents had started to develop soon after the issue of the open letter. With the clever use of the internet, Twitter and Facebook, the campaign suddenly started to grow exponentially.  Soon it had 30,000+ individual supporters and over 500 schools nationally joined them, some of which have very courageously put their names on the petition, including head teachers and governors.

Why would you need courage to put your name on a simple open letter and petition in the 21st century, you may rightly ask? Because the methods of the Hungarian “mafia state” include subtle – and on occasions not at all subtle – modes of intimidation by the higher authorities in all spheres of everyday life. The extreme centralisation of education in all its aspects (finance, equipment provision, maintenance of buildings, appointments of staff, advisers’ powers, career chances etc.) is such that sticking your neck out can and often does mean anything between workplace harassment, lack of promotion, and all the way to dismissal on trumped up charges.  In these circumstances fear is high and intimidation works most of the time.  This makes this sudden courage, lack of fear, unity and co-operation between hundreds and hundreds of schools so significant.  Marxists have always said that oppression will only work for a while. One of the slogans on the rally was: “So far and no further!”

Hungary has haemorrhaged hundreds of thousands of young people who have left the country for a hoped for better life abroad and every year more and more express their desire to leave as soon as possible. The best of the students in both schools and universities are also leaving, as they want nothing more to do with a country in the grip of a right wing government shifting relentlessly further and further to the right, thus lessening young people’s chances in the future. 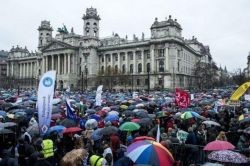 In the light of this and the obvious growing strength of the teachers’ movement, the FIDESZ government suddenly discovered that negotiations were a good thing and called all parties to a “round table discussion”. This came after refusing to talk with the teachers right through 2015, but in an instant all of them had seen through the ruse and some boycotted this late sham consultation, others went and then walked out.  The revolt is hardening. Their demands, which are simple, reasonable and sensible, have now been reduced from 25 to just 4.  They are:

Unless these are met at once, at least one union has started making preparations for a strike.  Given the current mood, it is entirely possible that other unions will join them not only in a supporting role, but actually out on the streets. We must offer solidarity with all fighting people, organisations, unions and other bodies who are fighting for the future of Hungarian youth and call for a one day general strike, which would put on the table not only the demands of the teachers, but those from all other spheres of life. We are all at risk from this government and their system, not only the young people and their future.

No fiddling at the edges of the problem can now produce any improvement in the life of Hungarians, and they are slowly but surely recognising this fact. Standing in front of Parliament in the pouring rain I heard many comments, including those of the speakers on the rostrum, comments that had nothing to do with education. The demands were political, for the end of corruption, for democracy and for a just society. Nobody called it socialism yet, but even a small number of people putting forward the ideas of Marxism under these circumstances would get an echo.

Bernie Sanders’s US presidential campaign prompted opinion polls showing incredible figures of young people standing for socialism. It could not be any different in Hungary today!