Hungary
Share
Tweet
Hungary is beginning to feel the effects of the general crisis affecting worldwide capitalism. On Saturday a demonstration of 10,000 public sector workers could be the first step towards a major strike in January.

The public service workers of Hungary are resolved to go to the bitter end to protect their present wages and conditions. They showed this militant mood last Saturday when more than 10,000 of them demonstrated on the streets of Budapest and threatened an all out strike on 12th January, should the government of Ferenc Gyurcsány abolish their yearly bonus and cancel their wage increase for 2009. 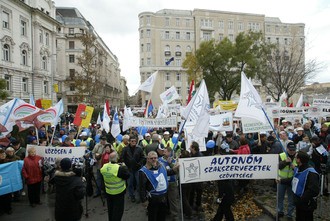 Half of downtown Budapest was closed due to the demonstration by public service workers in defence of their wages and conditions.

Half of downtown Budapest was closed due to the demonstration by public service workers in defence of their wages and conditions. Their route included the vicinity of most ministries and Heroes' Square, and starting at different locations they converged on Kossuth Square in front of Parliament by 1pm. The main focus of this action was to show their opposition to the government's austerity measures due to be introduced at the end of the year. Traditionally, Hungarian civil servants and public employees receive a "13th month's pay", which is a generally accepted yearly bonus as well as a regular wage increase, the amount of which is usually agreed around this time of year.

László Varga, the president of the joint public servants' strike committee, said that every single public service union representing 700,000 public employees in Hungary was represented on the demonstration. They all rejected the loss of their bonus and demanded a pay rise of at least 4% for 2009. He emphasised that if no response is received to their demands in due course, they will follow up this demonstration with an all-out nationwide strike on 12th January.

Apart from civil servants and other public service staff, the demonstration included members of the armed services - soldiers, policemen, fire fighters, customs officers and prison officers ‑ who marched in massed columns from Heroes' Square to Parliament to press home their demands. Other mustering points included the Ministry of Local Authorities, the Ministry of Education and Culture, the Defence Ministry, the Health Ministry and the Justice Ministry.

At Kossuth Square the text of the petition was read out and then handed in to the Prime Minister's office at Parliament. Separate petitions were later handed in at the various ministries by representatives of the trade unions in the ministries themselves.

The global financial crisis has already touched Hungary when a run on the forint nearly pushed the heavily debt-ridden Socialist Party government of Ferenc Gyurcsány into bankruptcy, running to the IMF, World Bank and the EU to bail them out. Total meltdown was averted, but the conditions attached to those 25 billion dollars are now beginning to be felt in the country. These public service workers were not the first and will not be the last to object to the bosses trying to put the cost of the capitalist crisis onto their shoulders.

There is a certain amount of bewilderment amongst Hungarian working people about the likely effects of the world financial crisis in Hungary. The press are reporting that while nobody trusts banks any more, the early signs for a Christmas spending spree seem good. "They are buying plasma TV's instead of shares!" - one web site reported. Perhaps the psychology of the masses is: "Let us have a good last Christmas before the waves close over our heads!" But sooner or later, and definitely once all workers find that Hungary is not isolated from the world crisis, they will realise that the only solution is in a unity between the public and private sectors to fight together for legitimate demands against a pro-capitalist government masquerading as socialists.

Last Saturday was an early shot across the bows of Gyurcsány's government. It will not be long before public and private sector will be united demanding jobs, housing, a decent health service and civilised conditions at the workplace, instead of the current austerity measures.