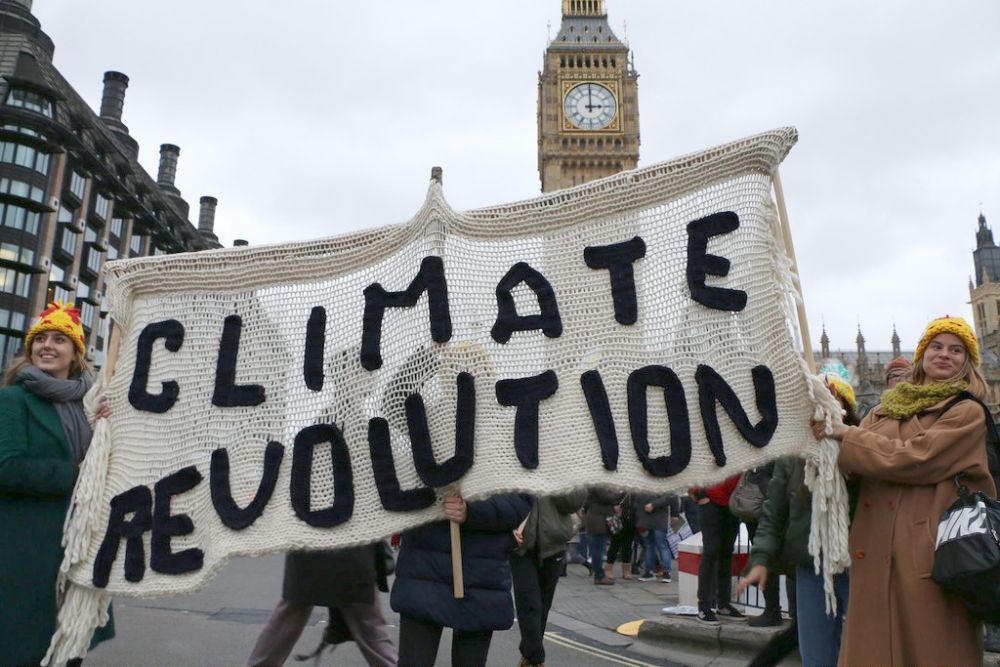 The international climate strike movement has created waves across the world. Over the past year, during the course of several global days of action, millions of young people from over 100 countries have walked out of school in order to join the ‘Fridays for Future’ protests, demanding immediate action against the climate crisis.

By taking to the streets en masse, occupying roads, and shutting down cities, these demonstrations have forced politicians to sit up and take notice.

What’s more, these mobilisations have filled a new generation with a sense of confidence, power, and purpose. For the protestors, the idea of mass, militant action is now the norm, not the exception. The word ‘strike’ is now firmly at the forefront of young people’s minds. The lesson is clear: if you want something, you must organise and fight for it.

Starting last year in Sweden with the weekly protests of one school student, Greta Thunberg, the #YouthStrike4Climate movement has rapidly spread internationally. In every country, the situation is the same: students and youth are entering into political activity, demanding ‘system change, not climate change’.

It is clear that urgent action is needed. A massive reduction in emissions and pollution levels is essential. And large-scale mitigation measures must be taken, such as the construction of flood defences and reforestation. But the capitalists and their political representatives are completely incapable of carrying out the radical changes that are required. 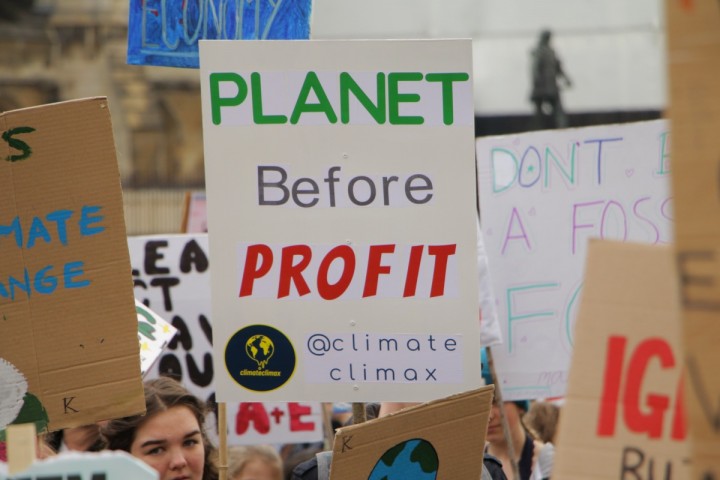 We must be clear: it is capitalism that is killing our planet / Image: Socialist Appeal

Global action is needed to solve a global problem, but capitalist governments are impotent. Some world leaders have declared a ‘climate emergency’. But this is an empty phrase when uttered from the lips of these big business politicians. After all, under capitalism, it is not they that really decide. Instead, the future of humanity and our planet is left to the caprices of the so-called ‘invisible hand’ of the market.

Greta Thunberg has pointed out that scientists are being ignored, and asks for governments to listen to the scientific evidence and advice. Similarly, activists from the Extinction Rebellion movement have tried to ‘raise awareness’ and convince politicians through a strategy of highly visible direct actions.

But the capitalists and their politicians will not be persuaded by moral arguments, nor by facts and figures. At the end of the day, we cannot expect this out-of-touch elite to do anything to protect the earth, as their only criterion is maximising profit at the expense of the rest of us.

Corporations will cut corners and ride roughshod through regulations wherever necessary in order to reduce costs, outcompete their rivals, capture new markets, and maximise their profits.

Capitalist politicians have nothing to offer in response to this destruction. All they can suggest is that we must club together and make individual choices to reduce our environmental footprint.

But the ‘solutions’ that flow from this are entirely reactionary. In essence they are just a ‘greenwashing’ of austerity – telling workers and the poor that they must tighten their belts to solve a problem created by the capitalists and their rotten system.

Most importantly, this liberal, individualistic mantra flies in the face of the facts. One recent study, for example, showed that 100 big companies (mainly big fossil fuel producers) are responsible for over 70 percent of greenhouse gas emissions. This highlights where the real blame for climate change lies.

In response to this fact, some left-wing politicians – such as Alexandria Ocasio-Cortez in the USA – have raised the demand for a ‘Green New Deal’, calling for governments to curb carbon emissions by investing in renewable energy supplies and creating green jobs.

These vague proposals generally amount to a Keynesian strategy of attempting to regulate and manage the capitalist system. But capitalism cannot be managed. It cannot be tamed and made ‘green’. As long as the economy is based on production for profit, it will be big business that dictates to governments, not the other way round.

We must be clear: it is capitalism that is killing our planet. Its insatiable pursuit of profits is responsible for the race to the bottom in which environmental standards and living conditions are driven ever further down. It is profit-driven corporations that decide what is produced and how it is produced. But this is not done according to any plan. Instead, our economy is left to the anarchy of the market.

It’s the profit motive, not economic growth itself, that is the problem. This is why calls from certain quarters of the green movement for ‘zero growth’ and ‘degrowth’ are reactionary. ‘Zero growth’ under capitalism is called a recession – and it is the working class and the poor who are made to pay. An argument for permanent recession is an argument for permanent austerity.

The only way to bring about a sustainable economy – where rising living standards are not in contradiction with protecting the planet – is on the basis of a democratic, rational, socialist plan of production. 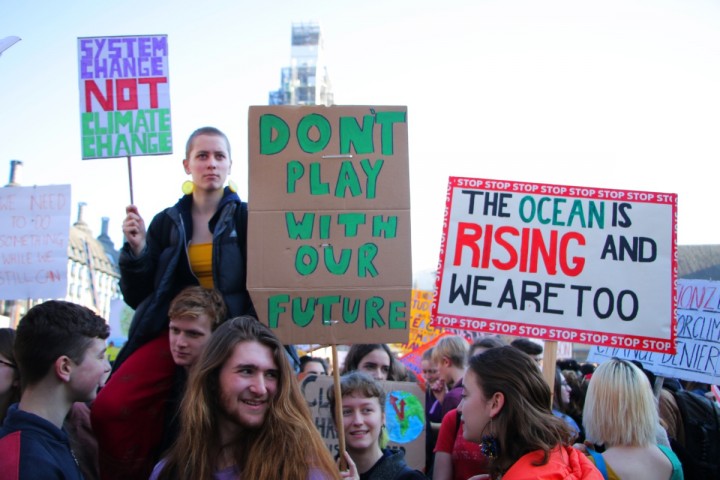 Only with the socialist transformation of society can we satisfy the needs of the majority in harmony with the environment / Image: Socialist Appeal

In private hands, the major monopolies generate obscene levels of waste and environmental damage. Nationalised under a socialist economic plan, however, they could employ modern green technologies to slash emissions and pollution in the space of a few years, while providing quality food, shelter, education, transport, and healthcare for all.

By combining the best scientific minds with the skills of workers in industry, under democratic workers’ control, we can put all of society’s technological abilities and resources at the service of humanity and the planet.

In many countries, support for Green parties has risen on the back of growing environmental concerns and a general distrust of traditional establishment parties. But fundamentally, the Green leaders are just liberals, who do not challenge the system or see the division of society into mutually opposed classes.

From the conclusion that capitalism is the root of the problem, it follows that we must fight for radical change on a class basis: linking the militancy and radicalism of the student climate strikes with the wider labour movement, with workers and youth fighting together for bold socialist environmental policies.

In this respect, the upcoming international days of action on 20 and 27 September potentially represent a big step forward for the movement. Greta Thunberg has correctly urged workers across the world to join students on these global walkouts. In some places, trade unions have already backed this call, promising to strike or protest alongside young activists.

The next step is for the whole of the labour movement to emulate these examples and throw its full weight behind the climate strikes. The power of the organised working class, armed with a socialist programme, would be unstoppable. As the Marxists have always stated, not a lightbulb shines and not a wheel turns without the permission of the working class.

Only by abolishing the capitalist system and replacing it with socialism can we plan the use of the planet’s resources in a democratic way. Only with the socialist transformation of society can we satisfy the needs of the majority in harmony with the environment, instead of generating profits for a parasitical minority.

The science and technology exist to deal with climate change. But under capitalism, these forces are destroying planet earth, not saving it. Socialism or barbarism: that is the future before us. We need a revolution.