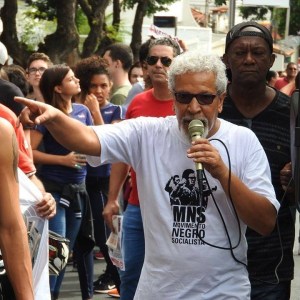 Last night, we received the tragic news of the death of comrade Roque Ferreira, a veteran communist, workers’ leader and leading member of the Brazilian section of the IMT.

A railway worker and a leading trade unionist with a long record of struggle in the cause of the working class, for me, comrade Roque represented the best kind of proletarian cadre.

A man completely dedicated to the cause of the working class and socialist revolution, he also showed a keen interest in Marxist theory and ideas. That is always the best combination for our movement.

I first met him when I went to Brazil, soon after the comrades of Esquerda Marxista (Marxist Left) had decided to join the IMT. I saw immediately that he was very enthusiastic about this. That is no accident, because Roque was an internationalist to the marrow of his bones.

Roque was a handsome man. His white beard and hair gave him an air of quiet dignity. He was extremely intelligent. But he was a man of few words. In the many conversations that I had with comrades in Brazil, I noticed that Roque was always present, listening intently to every word.

He spoke infrequently, but when he spoke, his words were always full of proletarian wisdom and common sense. This gave him enormous authority in the eyes of all the comrades.

In Shakespeare’s Hamlet, Polonius advises his son: “Give every man thy ear, but few thy voice.” That is excellent advice. Roque learnt the art of listening – a very important art that he dominated completely. I wish that every comrade would follow his example!

I sometimes find that young and inexperienced comrades are anxious to show how clever they are by talking a lot. That never impressed me – in fact, quite the opposite. It is not too difficult to repeat this or that idea you have picked up from books, without necessarily understanding what those ideas really mean.

Serious people take ideas seriously. And comrade Roque was one of the most serious revolutionaries I have known. That is why he never attempted to create a superficial impression of erudition by talking a lot.

When I say that he was serious, that does not mean that he was humourless. Quite the contrary, in fact.

He had a good sense of humour, unlike the sectarians who imagine that revolutionaries must always look as if they have just swallowed a pint of vinegar.

When somebody was talking nonsense, he would never speak sarcastically, just smile quietly to himself. Although he was a strong and determined person, he was also a very gentle character, entirely devoid of any spirit of narrow spitefulness. That is why he was loved not just as a comrade but as a friend and a genuine human being.

During his life, Roque fought many battles. Some he won, others he lost. Tragically, he could not win his final battle – the battle for life itself.

We first learned that he had fallen ill with COVID-19 a few weeks ago. Then, on 22 August, he was hospitalised, and yesterday afternoon, he finally succumbed to this terrible disease.

Comrade Roque, we will never forget you!