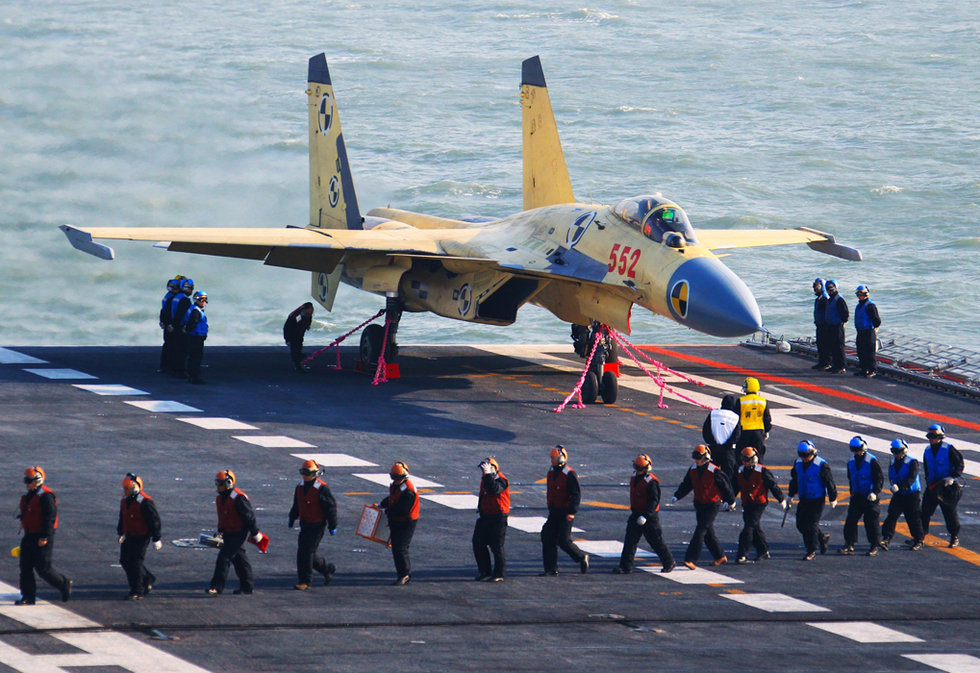 In the last few months we have seen two “surprise” exercises by the Russian military. This is the first time since the fall of the Soviet Union that such exercises have been carried out. Meanwhile, in the South China Sea a naval arms race is developing with China in the lead. And at the same time American imperialism is withdrawing ground forces from Iraq and Afghanistan and is increasingly reluctant to engage in Bush style invasions.

The epoch of the Cold War and the relative stability between two major super powers is long gone and was originally supplanted by the Pax Americana: the total world domination by US imperialism. Although still by far the strongest economic and military force on the planet, US hegemony is dwindling compared to what it once was. Now more “normal” imperialist relations are developing. The capitalist crisis and shrinking markets have forced the different national capitalist classes to use each of their individual state apparatuses in a fierce competition over markets, raw materials and control of the major trading routes. But such manoeuvres do not come cheap, and it is the working class that is expected to pay the bill. 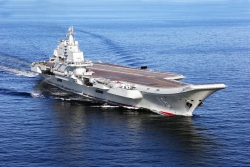 China bought the 67,500 ton ex-Soviet aircraft carrier Varyag, which was only 30% completed and floating in Ukraine, through a private Macau tourist venture in 1998. Since then the carrier has undergone a long refit. Varyag had been stripped of any military equipment as well as her propulsion systems prior to being put up for sale.

In 2007 there were news reports that she was being fitted out to enter service. On 10 August 2011, it was announced that the refurbishment of Varyag was complete, and that it was undergoing sea trials under its new name Liaoning.

In November 2012, the first flight landing was successfully conduced on Liaoning with Shenyang J-15.

China is ramping up its naval capability. In line with the refitting of a Soviet era aircraft carrier, which entered service on September 25, 2012 and the subsequent development of its own domestic variant, China is well on the way to acquiring the necessary technology not just to defend its shores, but to assert its imperialist interests in the South China Sea.

On March 25, 2013 an arms deal between China and Russia was announced in which China purchased 25 advanced SU-35 multi-role fighters and four advanced Diesel-electric submarines, amongst other equipment. This is an interesting turn of events because, until now, Russia had been reluctant to sell sophisticated equipment to the Chinese due to their infamous abilities in the field of reverse engineering – that is, to strip down devices in order to uncover and later on use the technology behind them.

China’s growing imperialist ambitions, when set alongside cuts in the American defence budget, means that all countries bordering the South China Sea are increasing their naval capacity. For the first time in 11 years Japan's defence spending is rising. Vietnam has increased its naval budget by 150% since 2008. And although the USA has cut its military expenditure, it has maintained its naval capacity in the Pacific. The threat from an economically and militarily rising China is simply too great to ignore.

The large class landing ship Tsezar Kunikov participated in the Russian 'Rapid Response' exercise - Photo: Luis Díaz-Bedia AstorBut South East Asia is not the only region where defence budgets are on the rise. While most western countries are cutting defence spending, Russia is increasing it by 25% this year. The war in Georgia in 2008 already signalled a new turn in international relations between Russia and the NATO countries. The Russian ruling class wanted to assert itself in the international arena after the humiliation of the 1990s. As a continuation of this policy, Vladimir Putin announced surprise exercises in the Russian Caucasus in February and in the Black Sea on the March 28 of this year. A surprise exercise is a serious matter since it risks showing other nations your real capacity (or lack thereof) to respond to a genuine military crisis. A nation only takes such steps either to prepare for offensive operations or to make a statement that “we are ready for war”.

The modernisation of the Russian military, along with the diminishing commitment of the US to NATO due to its own economic problems, is changing the threat scenario in the Northern European countries. Russia is back on the general staffs' strategic maps. Talk of more cooperation between Russia and NATO, as was the norm at the beginning of the millennium, has now receded. Both the Finish and Swedish forces (which are officially neutral) are openly conducting war games with NATO, especially in the Arctic, which is a whole new field of imperialist competition. The melting of the ice cap in the Arctic is revealing resources and shipping routes which until now have been too expensive to exploit. That is now slowly changing. But the question remains: who will control these valuable assets?

As we have stated repeatedly through the years, the centrifugal forces in the EU are rapidly on the rise. An example of this is David Cameron's promise of an in/out referendum on the EU. Although still in the distant future, the very talk of an exit from Europe by a major country is a sign of the growing divisions among the European ruling classes.

More alarmingly from the viewpoint of the strategists of capital is the growing divide between Germany and France. The close collaboration between these two countries has long been the central pillar of the EU. The European single market was an attempt on behalf of the European capitalists to overcome the limits of the nation state on a capitalist basis. Politically speaking, the idea was to economically bind Germany's impressive productive forces to the rest of the European countries, under French political leadership. For a long period they seemed to be succeeding, and they even managed to set up the currency union. The Marxist perspective of the impossibility of uniting very different economies on a capitalist basis seemed to be disproved by reality. That was until the crisis.

As the crisis spreads from the peripheral countries to the “heavyweights” in the EU, the Franco-Germanic alliance is breaking down. Up until now it has primarily been Germany who has had to pay for the huge debt in the peripheral countries, and in turn the German ruling class has demanded harsh conditions and brutal austerity measures. Now the French are in trouble. The French Finance Minister has announced that France will not be able to reach the 3% deficit level by 2013 and that the country needs more time. The Minister added that implementing harsh austerity measures would plunge the French economy into recession. The German counterpart Wolfgang Schäuble, according to the news agency AFP, was not impressed: "Telling populations that one way to resolve unemployment is by accumulating deficits, is for us the wrong path".

The economic problems of France are placing the German ruling class in a difficult position. On the one hand they demand strict austerity from the peripheral countries as the price they must pay for the billions of German Euros. On the other hand they need France as a partner so as not to be seen as “taking over” Europe. As one commentator once put it: France needs Germany to hide its weakness, while Germany needs France to hide its strength. But for every day that passes this alliance is getting into ever greater conflict with the diverging economic interest of the two countries. If the Franco-German alliance breaks then the EU is doomed.

This illustrates a general paradox within capitalism: on the one hand the European capitalists have a common interest in maintaining the common market and the Euro. On the other hand, every national capitalist class, in the face of rising international competition as a consequence of the dwindling markets, must seek assistance from “their” national state to protect their interests. We can see this process taking place on a global scale.
This will inevitably lead to conflicts, war by proxy and trade wars. However, we also have to state that in the present period full scale war between the major powers is not on the agenda.

There are two reasons for this. First of all, the US army today is by far the most advanced and powerful army on the planet. No country could stand up to US imperialism in open warfare. At the same time it is also inconceivable that the US army – that is being forced to retreat from much weaker countries such as Iraq or Afghanistan – could wage an offensive war against any of the major imperialist powers.

Secondly modern nuclear weaponry places a big question mark over the survival of the capitalist class itself if a full scale war between developed countries were to occur. For this reason alone, the ruling class will go a long way to prevent a new world war. As the 18th century poet Samuel Johnson said, nothing focuses the mind like a good hanging.

And finally we see today that the working class in the developed countries is too strong. They have not suffered any major defeats in the recent period. Already now the political elite, media and institutions in all countries are discredited. Think of all the mass demonstrations over the war in Iraq, and then try to imagine what would happen if for instance the US were to draft the entire male population with fighting ability to go to war with China. The result would be civil war and revolution.

Full scale wars between developed countries are ruled out in the present period. But this will not mean that stability will prevail. “Small” wars, such as the ones we have seen in Iraq and Afghanistan, bombing campaigns, blockades, war by proxy, etc., are not just inevitable in the short and long term but are already happening now and will become even more frequent in the next period.

As this contradiction rises to the surface, things do not bode well for the state of the world economy. The more fragmented the economy, the more barriers exist to trade on a world scale. This is clearly a problem, because increasing trade across the globe is one of the most fundamental driving forces behind economic growth.

After the crisis severely rocked the global markets in 2009, with a sharp decline in world trade of 12%, according to the World Trade Organisation, we saw a relatively strong rebound in 2010, where world trade grew by 13.8%. Since then, however, it has been steadily decreasing to 5% in 2011 and 3.7% in 2012. This is an indication of the continuing crisis and rising competition between the imperialist countries to secure “their” share of the market and raw materials.

It is a well established phenomenon that major economic crises not only shake the social conditions of the working class and youth, but also international relations between the ruling classes in different countries across the world. Such a crisis is reflected in insecurity and turbulence at all levels.

As this growing frenzy of international competition takes hold, the workers and youth are asked to pay the price for the capitalists to keep their market share. This price is paid through lower wages, casualisation of the workforce, cuts on welfare and a general assault on working and living conditions.

This has two important political effects: first and foremost we witness the radicalisation of the workers and youth under pressure from constant attacks. Secondly, we see the growing conflicts between the national ruling classes – uncertainty and turbulence at all levels both economic and political, but also in the diplomatic and military spheres. This weakens the ruling class and sets the stage for further revolutionary movements, not only in the Arab world and Southern Europe, but also in all the major developed capitalist countries.