India
Share
Tweet
The BJP has always been known as an extremely reactionary chauvinist party, but in its recent backing of Varun Gandhi it has fallen to even lower depths, a clear sign that it is preparing to foment communal conflict, pitting poor against poor, in order to divert attention away from the real social and economic problems. 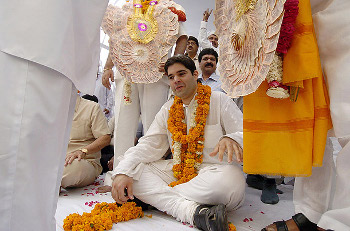 After beating about the bush for some time, the Bharatiya Janata Party (BJP) has finally shown its true colours. They announced not only will they protest against the arrest of Varun Gandhi, they will also reject the advice of the Election Commission and continue with Gandhi’s candidacy for parliament.

The BJP represents the extreme nationalist right wing of the capitalists and landlords in India. It is the political arm of Sangh Parivar, an informal bloc of several rightist organisations led by Rashtriya Swayamsevak Sangh (RSS). Though the RSS claims to be a simple cultural organisation, it is in fact the parent organisation of Sangh Parivar. The RSS, organised similarly to the fascist bands of Mussolini era Italy, rarely acts under its own name. It uses front organisations, like the BJP, to push forward its agenda. Although it has no defined membership or programme, it has all the trappings of a rabid fascist party. From the assassination of Mahatma Gandhi in 1948, to the recent pogroms in Orissa, the RSS has been the primary force acting behind the scenes.

Varun Gandhi, who is a descendant of the late Jawaharlal Nehru and Indira Gandhi, as well as the son of Sanjay Gandhi, is known for his corrupt lifestyle and anti-Muslim stance. He was recently arrested by the Mayawati government, under the ‘National Security Act,’ for making violent communal utterances in a public meeting during his campaigning in Pilibhit, Uttar Pradesh. Gandhi was recorded on a video camera making derogatory comments towards Muslims, saying he will chop off their heads and hands in order to defend Hindus. 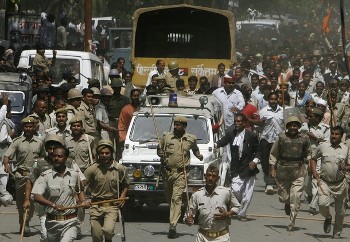 Varun Gandhi has been arrested by police for his virulent attacks on muslims.

This, unfortunately, is not an isolated instance of hate speech by a BJP leader. They are known to make similar speeches in public quite frequently. These remarks, which are against the law and have the potential to endanger innumerable human lives by provoking riots between religious communities, are always taken lightly by the elite rulers. Wherever the right-wingers control state governments, or form part of a coalition, they tend to enjoy immunity from the law. The infamous occurrences in Gujarat, Bangalore, Orissa, and Bombay are all examples of this.

It is only a matter of chance the young chap Gandhi, thoroughly poisoned by communal venom in the traditions of Sangh Parivar, was caught on camera while spilling out this recent nonsense. The right does not permit cameras or recorders in their meetings and is known to use violence to enforce this rule.

But we should be clear: this is not simply about Varun Gandhi; it is part of a broader political strategy where the ruling class cunningly engineers divisions among the working people for their own political ends. In order to capture the power for themselves, the elite leaders strive to polarise people by highlighting differences in their community, religion, and caste. By provoking a communal frenzy, they use fear to heighten their support among the people belonging to the Hindu community. Needless to mention, this strategy is hardly a new one.

The elite who took power from the hands of British colonialists (through betrayal of the freedom movement) declared its future state to be “socialist” and secular giving false hopes to the people for a better future. While the slogan of socialism and equality matched the aspirations of the masses for emancipation from poverty and domination; secularism was the slogan of a peaceful co-existence between different communities. People have now seen these rulers betray their own proclamations, one after the other, after initially betraying the freedom movement itself.

Formations like the RSS, BJP, Shiv Sena, and Bajrang Dal have been used by the ruling class to divide the working people and brutally suppress their democratic struggles. Now, with the BJP openly supporting Varun Gandhi and his statements, it is clear this is part of a concerted campaign and political policy, as opposed to a few isolated events. This should leave no doubt about the goals of India’s right wing.