India
Share
Tweet
A scandalous case of recycling of syringes in Gujarat hospitals and clinics has led to the death of 65 people, with more than 200 still struggling for their lives. The callous attitude of the government is clear for all to see.

With one more death reported from the Sabarkantha District in Nothern Gujarat, due to the epidemic of Hepatitis-B, the total tally on human lives has touched 65, while more than 200 are still struggling for their lives in different hospitals; and still many more casualties may occur in the days to come.

While the disaster was at its peak, continuing to take its toll upon the lives of common people, the saffron brigades of the extreme right-wing Party and government, led by Narendra Modi in Gujarat, were busy in moral policing of the youth on Valentine’s Day. This disaster, which in the first instance appeared to be the act of nature, in fact was purely man made and was the result of gross and deliberate negligence on the part of the state. 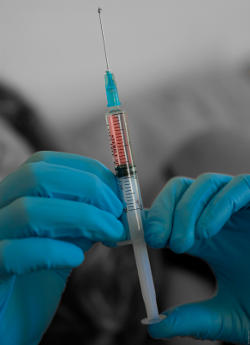 A deadly Hepatitis-B epidemic is spreading in Gujerat as a result of recycling of syringes, a practice that has been allowed to spread by the pro-capitalist government. Photo by yanivba.

On 2nd February 2009, one after another, three cases of Hepatitis-B infection were reported in a nursing home in Modasa Town, north of Gujarat. More cases were reported within a couple of days in the town, showing a quick spread of the disease. The state machine, however, continued to sleep over the issue, for about two weeks, awaiting as usual, for the moment when the disease would subside by itself.

The disease, however, in the meantime, continued to spread further in Sabarkantha, around Modasa town and even to the city of Ahmedabad, taking on proportions of a virtual epidemic. It was only after the media reports of the issue created panic among the public and anger against the government that the authorities had to swing into some action. Medical teams were despatched to the affected regions, but only to conduct surveys, instead of aiding the people to fight it. By the time the government really thought of sending medical teams equipped with the anti-virus vaccine etc., the deadly virus had spread even further, exploding in alarming proportions. By then, more than five dozen lives had been destroyed.

This, however, did not deter the Health Minister of the State, Jaynarayan Vyas, from boasting that the situation was under control and that 225 medical teams were already at work in 115 villages to fight the epidemic. The villagers, however, denied this stance, saying that no medical aid had at all been sent to the rural interior in the district.

Apart from the 65 lives already lost, more than 200 remain in hospital struggling for their lives and many more have been infected with the deadly virus which they will carry for the rest of their lives, forcing them to be on constant red alert, at every moment.

The deadly Hepatitis-B virus, largely unknown in the advanced countries, is at home in all backward countries of the world, where common people, mostly poor, are trapped by it with ease, through contamination of water or negligence of medical staff. Hepatitis-B is a retrovirus, the deadliest of all hitherto known viruses. After intercepting the DNA of the liver cells of humans, it causes inflammation of the liver leading to high fever, which more than often results in death. Even those who manage to survive, upon costly treatment and vaccines, harbour the ‘Hbs Ag’ antigen for the rest of their life, becoming prone to Hepato-Cellular Carcinoma, a virulent form of liver cancer. Although it was well aware of this fatal nature of the disease, the government first allowed it to hold the ground and then to spread at its convenience.

Costly vaccines to counteract this disease, although regularly purchased by the government, on paper, instead of being used to stop the spread of the disease, supplies in bulk are diverted to the open market, to make huge profits out of it. However, what was revealed during the investigations that followed was more horrific. They brought to the fore the real horror story of capitalism, as to how the isolated cases of disease erupted and could turn into an epidemic of such proportions!

It transpired that all those who caught the deadly Hepatitis-B infection, had recently visited one or other hospital or nursing home, where drugs were applied to them through syringes. It was revealed that these syringes had in fact been recycled from the garbage, and were put to reuse, with impunity. This recycling had become a widespread industry in Gujarat. Working under the auspices of the state authorities and the hospitals and nursing homes, Gujarat had become the real hub for the consumption of this recycled material. Tonnes of such material were being recycled and reused in the hospitals, under the nose of the authorities and with their collusion.

It is important to note that the law mandates compulsory destruction of these syringes and needles through incinerators, which apparently was not being done. The intentional laxity and collusion on the part of the state authorities with those who filled their coffers with the money made from this unlawful business permitted the disaster to happen. Hundreds of tonnes of this material collected from the garbage and then recycled, were recovered from the stores of many hospitals and nursing homes. A few arrests were made to hush up the matter and to pacify the people. However, not a single official has been indicted so far.

The catastrophe was thus man made and a result of criminal negligence on the part of the state towards the common people. The right-wing government, which takes pride in indulging in moral policing of society, turning it in a saffron ghetto for the common people, utterly failed to curb the corruption of its officials and to take care of even the basic civic amenities of the people. It remains tied to those who are responsible for the devastation of the people through diseases and epidemics.

The private profiteers and state authorities in collusion with each other have been instrumental in wreaking this havoc upon human lives. The pro-capitalist government and their officials, instead of enforcing the law and taking care of the welfare of the people, help the profiteers to generate more and more money, even at the cost of the health and lives of the common people.

The diseases and epidemics to which the poor routinely fall prey, germinate on the soil of the socio-economic system of capitalism as a whole. The common people are the real sufferers under the yoke of this degenerate system of profiteering and markets, where the health and lives of people count nothing more than a commodity, and will continue to suffer unless they overthrow this system through their common effort.