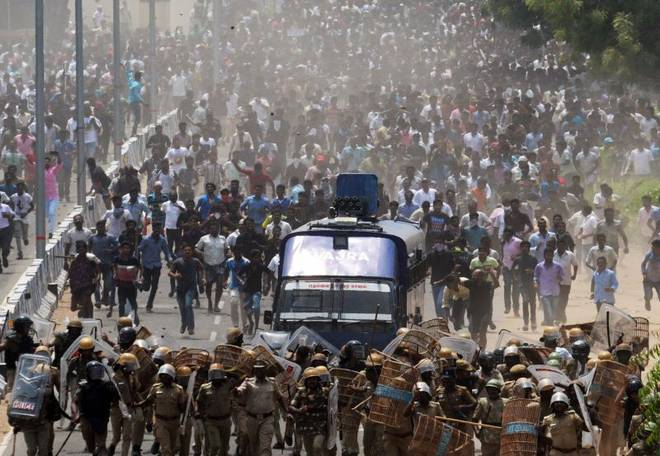 Dozens of peaceful demonstrators have been massacred by the state authorities in Tamil Nadu, India, after organising to demand the closure of a plant that is wreaking havoc on the environment and causing health issues for the locals. Louis Thomas reports from Tamil Nadu.

Sterlite is a copper smelting plant located in Tuticorin (Thoothukudi), on the southern tip of the state of Tamil Nadu. It is a subsidiary of Vedanta Pvt. Ltd., a UK-based company which is owned by Mr. Anil Agarwal, who currently resides in London. It has plants all over India and in various other countries. Large parts of India and states like Tamil Nadu have large amounts natural resources, which is part of the reason British imperialism colonized India, and this richness continues to attract capitalists today. 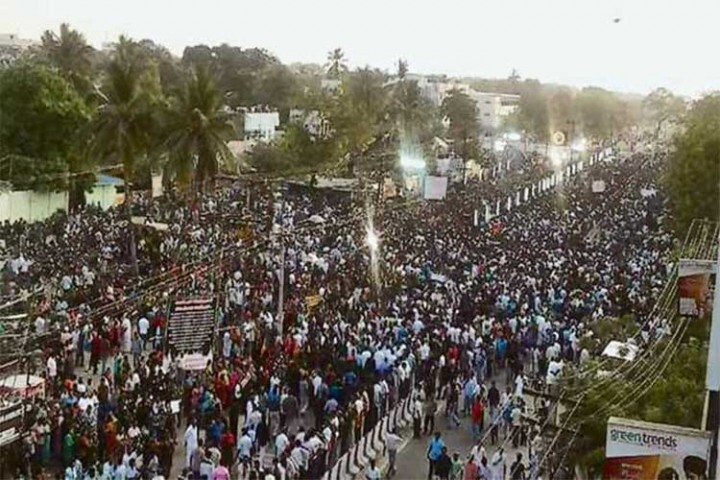 Vedanta has enriched its coffers by violating environmental laws and human rights. But it had to shut down its plants in Goa and Rajasthan due to severe resistance by masses. Previously, the Orissa state government gave Vedanta permission to perform bauxite mining in the Niyamagiri hills. But there as well, the project had to be stopped because of the severe resistance of tribal people. Even the Supreme and High Courts of India have passed orders to shut down plants, citing environmental violations.

The Sterlite Copper Plant is a subsidiary of Vedanta and was allotted for construction first in the coastal district of Ratnagiri, Maharashtra in 1993. But later construction was halted because of resistance by the masses in that district over environmental hazards. So it was transferred to Thoothikudi: a port town where people depend on agriculture, fishing and trade for their survival. The Tamil Nadu Pollution Control Board (TNPCB) had given the go-ahead to the project on the condition that the plant should be constructed 25km outside the of Gulf of Mannar and should conduct an Environmental Impact Assessment (EIA). But the project was allowed to start flouting all these conditions from 1996.

Due to gas leaks, the air and water surrounding the plant is completely polluted. Due to this the local people were affected by skin diseases, headaches and even cancer.

In a report by the News Minute, according to NEERI’s (National Environmental Engineering Research Institute) initial study in 1998, Sterlite failed to develop a green belt; was producing products it was not authorized to; had contaminated the groundwater with arsenic, lead selenium, aluminum and copper; may have tampered with the online monitors; and had caused numerous gas leaks.

This impact study that was submitted to the Madras High court led to the plant being shuttered, but later, NEERI gave the go-ahead for it to continue operations.

The reason for the protests

The Sterlite company has sought expansion of the plant and wants to double production to around 400,000 tonnes of Copper. In 2010, the Madras High court stepped in due to large-scale environmental violations by Sterlite. But the order was stayed by the Supreme Court in 2013 and instead a fine of 10bn rupees was ordered. The plant was allowed to continue functioning since it provides employment and contributes to copper production. Sterlite has approached the Tamil Nadu Pollution Control Board to renew its license and expand. This request is currently pending. The expansion of a plant that has already caused environmental degradation and health concerns led to new protests.

The people of Kumaratipuram village, whose water bodies are affected due to contamination from plant, began fighting for its closure. In March 2018, the peaceful protest culminated in a huge crowd of 50,000. On the 100th day of the protest, on 22 May 2018, the people sought permission to demonstrate near the Sterlite plant. But the authorities refused. Objecting to this move by the authorities, the organizers decided to picket the Sterlite plant and Collector Office (District Head). On 22 May, at 10am, protestors organized before the Old Lady Mother church, and proceeded to the District Collector’s office in Tuticorin. The 20,000 protesters nearly outnumbered the police and they marched past the police barricades.

Massacre of the anti-Sterlite protestors

The police used tear gas but the protestors moved on peacefully. However, the authorities did not follow the Tamil Nadu Police Standing Orders (PSO), which state that gunfire cannot be ordered without first using tear gas shells, then water cannon to disperse the crowd and only at last after a final warning. Even then, shots are supposed to be delivered below the knees.

None of these these rules were followed and the news footage shows police shouting “Kill at least one of the protestors.” Snipers were also deployed. Video footage shows police officers on top of a van, firing on protestors with live ammunition. Nearly 10 were killed on first day and on next day, at a protest at a hospital, another a teenage boy named Kaliappan was killed. 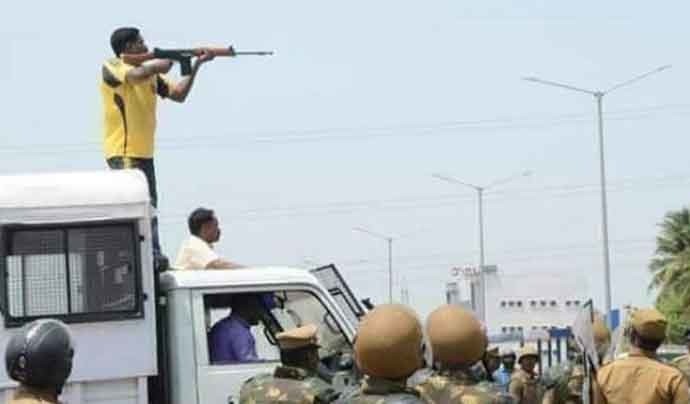 State authorities fired on the crowd from on top of vehicles / Image: public domain

Two of the victims, Tamilarasan and Jeyaraman, are members of the revolutionary organization that was leading the anti-Sterlite protest. A 17-year-old girl Venista and another woman were also killed. 65 people were injured due to the indiscriminate gunfire from the police. Reports by injured victims say that this was clearly a planned action by the authorities. Furthermore, police have been going to the homes of protestors and those who support them and indulging in harassment and violence.

Protests are being held all over Tamil Nadu. Left-wing parties like CPI, CPM and CPI-ML have condemned the killings by the Tamil Nadu state government for the profit of the capitalists. A public emergency has been ordered by the state of Tamil Nadu in three districts (Tirunelveli, Kanyakumari and Tuticorin). There has been a complete media blackout and there are currently no internet facilities in these states.

The Tamil Nadu state government, led by Edappadi Palanisamy, is a puppet government under Modi’s control. Both these central and state governments are working tirelessly for their masters, “the corporates” (capitalists). The AIADMK Party in Tamil Nadu survives at the behest of the central government. All the ruling parties, from Congress to BJP, have benefitted from receiving foreign money from Vedanta and were found guilty by the Delhi High Court after 10 hearings in 2015 under the Foreign contribution Regulation Act (FCRA) for receiving foreign money. The High Court has ordered the election commission to take action against these parties under the Representation of the People Act. FCRA act was amended in 2018 to exempt companies like Sterlite because they are only subsidiaries. Now, foreign companies can donate to political parties so long as they have subsidiaries in India. Foreign donation has been made legal in the 2018 budget. Congress and the BJP worked together to get this act passed to escape from the 2015 Delhi High Court judgment. These parties received tens-of-millions of rupees from Vedanta. 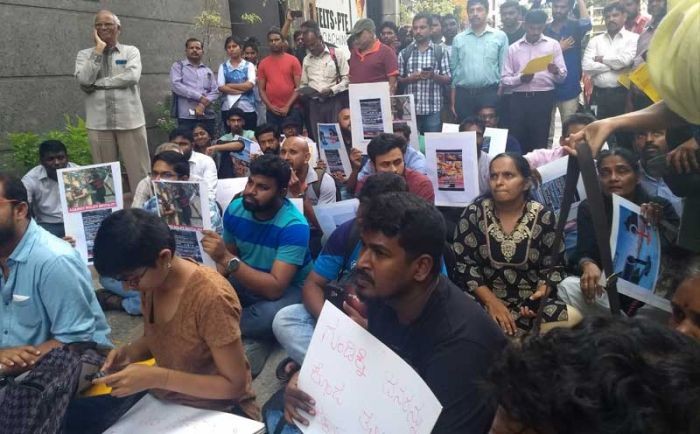 We send our solidarity to the protestors in Tamil Nadu / Image: public domain

Southern Tamil Nadu is a place where the people have a great heritage of protest, including during the national independence struggle. The area consists mostly of working-class communities. Tamil Nadu has recorded the highest number of protests in India, nearing 20,000 in 2017. Protests are continuing all over the country, seeking the closure of the Sterlite plant. There was even a protest at the offices of Vedanta in London. This struggle against the capitalists and their government can be won only through the widest solidarity from workers and youth all over state of Tamil Nadu, India and throughout the world. Protests and demonstrations must be launched everywhere to ensure the people of Tuticorin are not defeated.