India
Share
Tweet
Four hundred thousand slum dwellers were rendered homeless within a period of two months just before the heavy rain season of this year in the city of Bombay alone. This is happening all over India, making millions homeless to open up land for speculative investment. We publish a contribution from someone who is active in fighting the demolitions.

India with its 7% GDP growth rate of last year and a target of 8% for this year has occupied the top position in a global survey of business confidence by Grant Thornton International pushing behind not only G8 giants but also its nearest rival China. To sustain this position, providing infrastructure to local and foreign investors is on top of the Indian Government’s priority list. Land acquisition on a large scale by the government in both rural and urban areas and passing it on to industrial houses, builders at nominal price is at its historical peak.

The space is being cleared for building roads, flyovers, multiplexes, skyscrapers to house offices of IT and financial businesses, MNCs owned shopping malls and housing colonies for these few neo-rich. The construction industry is growing at a rate of 5% and is at 12th position in the world. On the other hand, with high levels of automation in new investments and upgrading of previous industries, large scale closure of small scale industries and cities becoming the hubs of IT and Finance sectors, the requirement for manual, skilled and semi-skilled labourers is at its minimum in the cities. So the local governments in all the major and minor cities and even towns are on a slum demolition spree.

Four hundred thousand slum dwellers were rendered homeless within a period of two months just before heavy rainy season of this year in the city of Bombay alone. The exact figure for other cities is not available but demolition of slums is almost a routine affair in all the cities and towns and that too without giving any alternative place, with 7 days notice and with extreme brutality during these operations.

Ahmedabad in Gujarat has experienced four or five slum demolitions a week during the last one and a half months with each slum having from 100 to 700 dwellings. A temporary break has been applied in Baroda because of the organized protests as will be described later. West Bengal where Stalinist parties have been ruling for the last 25 years is no exception, the only difference being the demolitions there are the fastest using the most brutal force, giving no time to slum dwellers to manage any help. 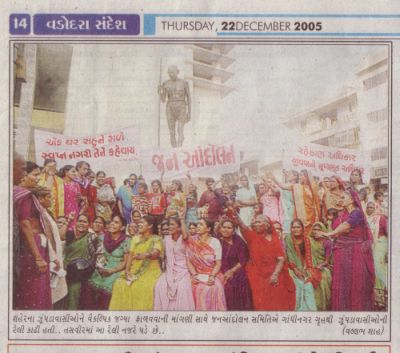 India is signatory to the declarations by UN conference on ‘Human Shelter’ 1996, which only reconfirmed the previous commitments of the 1976 conference. In this declaration it is said that enough shelter with all basic amenities is recognised as a human right and it will be the government's responsibility to see that all the people get it. In the last 10 years, umpteen number of times promises have been made by state and central governments to build houses for the slum dwellers. Gujarat state government’s policy on paper is to provide houses to every slum dweller wherever they are located at present. But exactly contrary to all these paper promises, large scale slum demolitions are undertaken daily to ‘beautify’ the cities.

The only problem with this whole dream of the Indian ruling class to create ‘beautiful’ cities for themselves is that the people who are being uprooted do not want to take it all lying low. After all they had erected these dwellings by saving pennies from their meagre earnings. Most of them have been living there for the last 25 to 30 years or even 50 to 60 years. To get their votes in elections they were given water connections, metered electric connections, charged taxes and now a bulldozer comes and destroys everything pushing them back 25-30 years!

The resistance to slum demolition was always there by different groups working independently, the authorities giving practically no response as the resistance remained low key because of the low sustainability of slum dwellers to continue the fight as most of them are daily wage earners, the inability of the organizations working with them to realize the need for unity, the hold of one or other bourgeois political parties in the slums fooling them giving false promises and so on.

The recent spate of demolitions has brought some of the organizations and slum dwellers together and an umbrella organization “Jan Aandolan” (People’s Movement) has been formed. It has started organizing slum people forming their committees for putting up a long-term fight. Taking legal help of activist lawyers who are among the founder members of “Jan Aandolan”, quite a few court orders staying demolitions are managed at the same time. In its first state wide protest program, rallies and demonstrations were held in two cities Ahmedabad, Baroda and four towns Vyara, Kalol, Himatnagar, Modasa of Gujarat State on 21st December demanding Housing as a Fundamental Right, implementation of the government’s own policy and an immediate stop to demolitions. 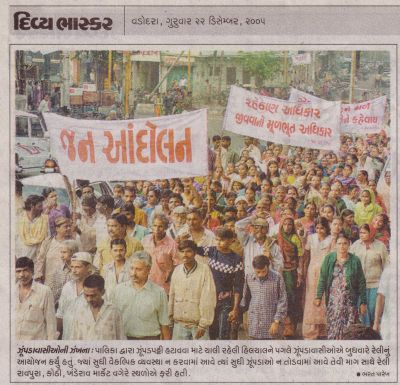 Rallies were held on the 8th day of local civic election results in Baroda and though no mention of slum dwellers’ well-being was present in the pre-election manifesto and in fact notices were being served for demolitions from day one of the election results, by 5th day of the rally the elected mayor started talking of settling them in situ! Municipal offices have started responding to the demands for basic amenities in the slums very quickly. In fact the Baroda Municipal commissioner promised to provide light and water wherever it is not there right at the time of receiving memorandum. The promises may be just to calm down the tempo of the movement while actual work is not done at that speed.

The picture is not as rosy as other places in Gujarat and demolitions continue. In Mumbai the schemes are being prepared by the government under the pressure of the agitations there. But it is very difficult to sustain these movements during time taken to prepare and implement the schemes. Some of the slums are saved intact with quick legal actions using lame laws of Indian constitution but where the bulldozer has already destroyed it all, how long can they stay in the half or fully broken houses or tents to occupy the same place facing the extremes of weather vagaries that India has.

“Jan Aandolan” has been formed with a long term view to take up all the other issues like unemployment, education, health, etc, of poor people and not just the demolition alone. Much more is required to be done and this is just a beginning.