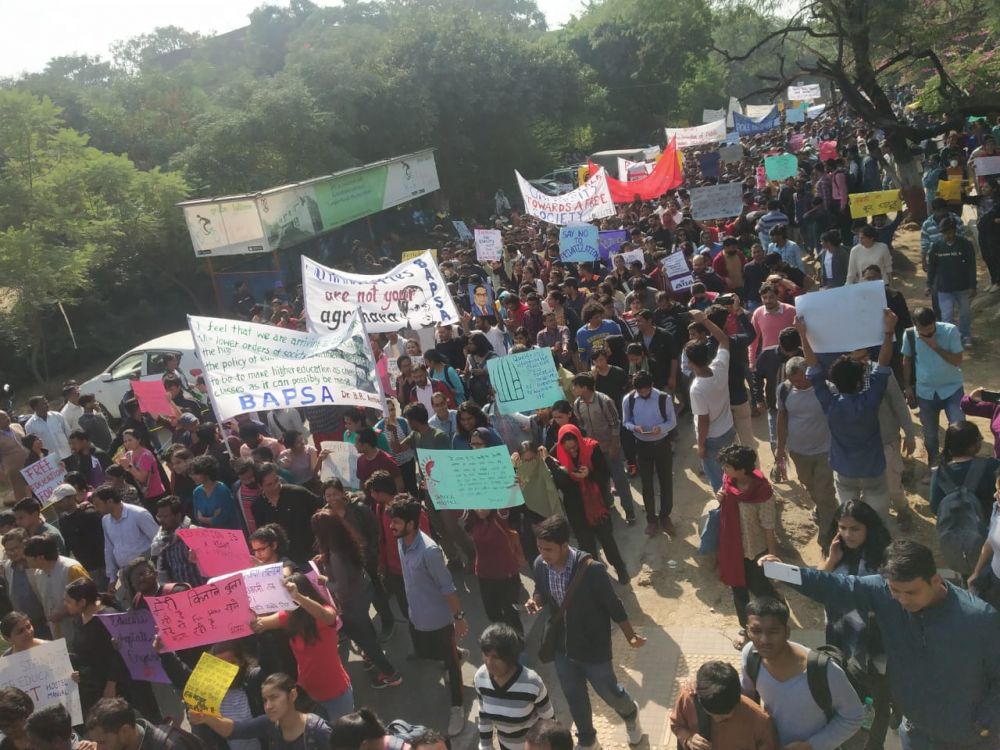 The protest movement of Jawaharlal Nehru University students against indiscriminate fee hikes and reactionary discipline policies for hostels have entered a new stage. The university administration has astronomically increased the fees by 999 percent, meaning hostel room rent has increased from INR10 ($0.14) to INR600 ($8.35). In addition to this, there are newly implemented service charges of INR1700 ($23.67), and the mess fee has increased from INR5000 ($69.61) to INR12000 ($167.07).

In addition to this horrific exploitation, new draconian rules (concealed behind the false veil of discipline and so-called morality) are being enforced, according to which the uniform of female students will be decided by the university administration, disciplinary action will be taken against mixing of male and female students and other such reactionary measures have been taken. All these actions are an attempt to extinguish the revolutionary fire of JNU students, and a continuation of the Modi government’s reactionary agenda.

The students of JNU have been resisting these atrocious actions and the JNSU has gone on complete strike, with many departments on total lockdown. Strikes and protests are basic rights of every student, but as always the Modi government’s reaction has been extreme. His puppet media has declared the JNU students hooligans and criminals, hellbent on destroying the “peaceful academic” atmosphere of the university, while the rabid hooligans of BJP student wing, ABVP, have been unleashed to create terror and destruction so the state can further carry out its barbaric actions in the name of restoring order and peace. The JNSU leadership has declared a continuous strike and protests until all its demands are met.

Faced with such a poisonous campaign, malicious tactics and outright lies, the movement, instead of retreating, has in fact renewed its struggle. Students from different universities all over the country are uniting in support of JNU students, especially at Banaras Hindu University, University of Pune, FTTI University of Hyderabad, Ashoka University and Ambedkar University.

This fiasco, solely created by the government, must be seen in the context of the general social, political and economic conditions prevalent in India today. Right now, the most-reactionary, religiously fanatic and capitalist friendly government in India’s history is in power. It has carried out consistent and brutal attacks on the working class and labour rights, privatised scores of state assets indiscriminately, and created one of the largest unemployed labour forces in modern times. The plan of selling off education to rich capitalist cronies for astronomical profits is a continuation of these policies.

To cover up these crimes against the workers and youth, the saffron flag is being used unashamedly to suffocate and bury all opposition and drag society back to the dark ages. This whole situation exposes the crisis of capitalism as a whole. On one hand, there are boisterous declarations of “Shining India” and “Vikas”, while on the other hand the majority of the population is condemned to die without access to even basic social necessities of life.

The wretched masses of India have given a resounding message to Modi and his friends of their strength and power through the four largest general strikes in the history of humanity.