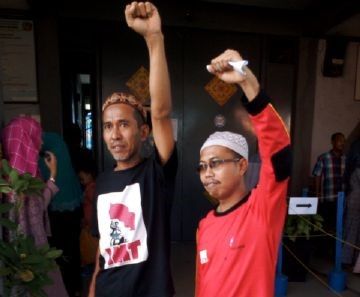 After being in jail for 3 months for the crime of defending workers’ interests, comrade Abdul Hakam (a member of Militan Indonesia, the IMT section in Indonesia, who is also a labour organizer for FSPBI-KASBI Gresik) and Agus Budiono (FSPBI-KASBI Gresik trade union activists) are free at last. They can finally be with their wife and kids again, hug their fellow comrades, and free from the steel bars that seek to crush their spirit. Militan Indonesia and IMT would like to send our deepest respect to both comrade Hakam and Agus for their bravery and self-sacrifice.

Our two comrades were charged under the so-called “Unpleasant Act” law in what could only be considered to be a show trial. Their only crime was to organize workers of petrochemical factories in Gresik, East Java. Through their action in demanding for better working conditions they have supposedly made the bosses feel unpleasant. They also often made the Labour Department in Gresik go through quite an unpleasant experience through militant mass actions that they led, demanding that the officials be competent in doing their simple jobs. The local government has also been subject to their harassment, as they led the workers to fight against any illegal fees in schools. It is true that the more we demand simple democratic rights, the more people at the top will feel very uneasy.

The State and Repression

One of the lessons from the jailing of comrade Hakam and Agus is the undeniable fact that the State that we have is a bourgeois state, and therefore it can only serve the interests of capital and will punish those who dare to stand up and fight.  The police, the judges, the state attorney and the jail that punished our two comrades are fundamental parts of this State. They are the repressive state apparatus, and comrade Hakam and Agus are not the only ones who fell victim to it. For the past few years hundreds of labour and peasant activists have been subject to the wrath of these state apparatus. The millions who perished in 1965-66 massacre by the New Order regime were also the victims of the same Bourgeois State, and for the same crime as comrade Hakam and Agus: to dare to fight against the interests of capital. 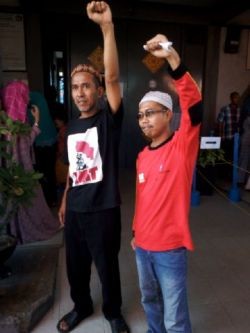 Photo: Militan - IndonesiaThere is no neutral State, we live in a class society divided into two main camps. On one side are the capitalist class and their paid lackeys. On the other side are the workers and the toiling masses (peasants, fishermen, and urban poor). The daily experience of the working masses has furnished more than enough evidence to this fact, from the poor street vendors who have to play a cat-and-mouse game every day with Satpol PP officers (Public Order police), to the 26 labour activists who are now being charged for mobilizing the workers against the PP78 law (an anti-labour law that removes the right of trade unions to negotiate minimum wages). This Capitalist State is beyond reform. It cannot be made to be a pro-people state. It is also not question of replacing this or that corrupt official with someone who is honest and clean. The State has been historically built in such a way to defend capital. Therefore it has to be dismantled systematically and thoroughly from top to bottom.

This is one of the most important lessons that we can draw from the recent repression of comrade Hakam and Agus, and many other activists who are fighting against injustices. It is necessary to wage a revolutionary political struggle to transform the whole society, its political and economic structure.

Comrade Hakam and Agus have returned to their family, free to breathe fresh air and bask under the bright yellow sun of this beautiful land we call Indonesia. But our beautiful Indonesia is filled with brutality, repression and oppression, that have their roots in capitalism. Hundreds of millions of workers, peasants, fishermen and urban poor are not yet free from the system that ensnares them into wage slavery, that binds their fate to capital and the anarchy of free market. Let’s welcome back our two comrades and continue our struggle to free the working class from capitalism and open the path to Socialism. 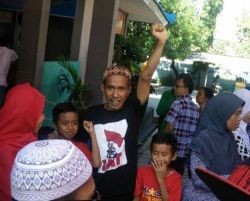 Photo: Militan - IndonesiaMilitan and the IMT would like to thank to our readers and supporters from around the world who have responded to our solidarity campaign for comrade Hakam and Agus. For the past 3 months we have received moral and financial supports from hundreds of comrades from more than a dozen countries: Netherlands, UK, Belgium, Italy, Denmark, Sweden, Switzerland, France, Germany, Czech Republic, Spain, Canada, USA, Brazil, El Salvador and Taiwan. We collected close to 1500 USD, which surpasses our target of 1000 USD. This is a testament of proletarian internationalism.

Militan Indonesia is building a Marxist organization in a country where Marxism is still illegal, where not long ago millions of communists were brutally massacred by the army. From time to time we will face the wrath of the Capitalist State, but we are confident that we can count on the supports of our readers and comrades around the world to rally to our support when needed. Please consider supporting our work in Indonesia through regular or one-time donation.