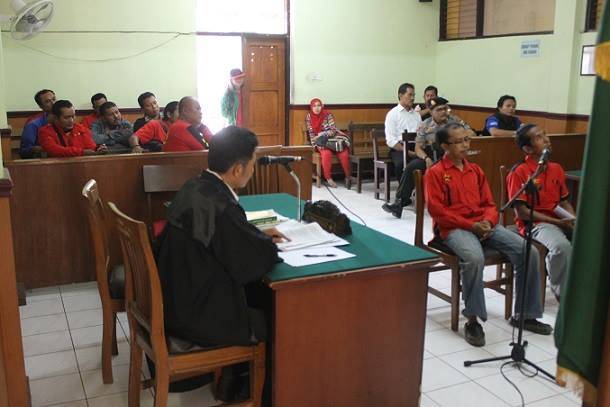 Another attempt has been launched to criminalize labour activists in Indonesia. The court in Gresik (East Java), which has been convening for the past 4 months,  has just given its verdict against two of the leaders of the FSPBI-KASBI union: Abdul Hakam and Agus Budiono.

These two comrades were charged under the “Unpleasant Act” law. On December 9, 2013, the judges declared them to be guilty of this charge and gave them 3-month jail sentences. The comrades are seeking to appeal to a higher court. 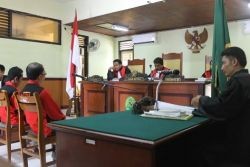 This show trial started with a complaint to the police from PT Hasil Bantuan, a petro chemical factory whose workers are organized by the FSPBI. It did not take long for this complaint to be processed by the police. In one week the complaint was ready to be tried in a court of law. This was very different from the complaints that FSPBI workers from PT Petrokimia Gresik had filed earlier this year. The workers had reported to the police that hired thugs were forcibly confiscating their company ID cards. However, this report was practically ignored by the police. As a result, about 100 workers – because they do not have their company ID cards – were not able to enter the factory to work for the past 8 months. Their employment status is still hanging in the air.

PT Hasil Bantuan filed a complaint that there were some workers in their factory who were being intimidated by the FSBPI union. It was said that there was discrimination against some workers if they refused to participate in demonstration actions organized by the union. Later on, these alleged workers were found to have established a new “union” within the factory with the kind permission of the management. The situation is different with FSPBI. If there are workers who want to join FSPBI, they would be either transferred to another floor, or worse they will be fired for no reason. This is a clear sign that management is attempting to crack down on a progressive union that genuinely fights for the interests of the workers, and replace it with a more management-friendly union.

During the trial over the past 4 months, there were inconsistencies in the testimonies from the plaintiff. For example, witnesses for the plaintiff said that they were forced to participate in a demonstration in March 2013, where in fact the said demonstration happened in January 2013, and there was no intimidation from the FSPBI union. It was also said that the president of the FSPBI at that time was Abdul Hakam, where in fact he was heading the advocacy division of the union, whereas Agus Budiono was the treasurer of the union.

The judges displayed their bias in this show trial. They did not take into consideration witnesses for the defendants, nor written evidence from the union minutes, and newspaper clippings showing the location and date of the disputed demonstration. The judges decided that these two comrades were guilty of provoking workers to demonstrate in March 2013! It is clear that that all available evidence shows that the demonstration actually took place in January 2013. But never allow the truth to get in the way of profit.

To publicize this show trial to the public, FPSBI will report the results of this trial to the judicial commission in Jakarta. They will also spread as widely as possible the information about this trial to trade unions in Indonesia and internationally, in order to show that the law in Indonesia is nothing but an instrument to criminalize workers and crack down on progressive unions!

Over the past 2 years the FSPBI union in Gresik has become very well known amongst the wider masses as a trade union that often organises a lot of mass actions. This is not surprising given that the FSPBI organizes many large factories: electronic, instant noodle, petrochemical, and a number of other state-owned enterprises. Moreover, the union is also active in fighting for the interests of the wider masses by mobilizing against price increase in basic food products, mobilizing for free education and other issues.

The demand for the abolition of outsourcing that is being fought by the union has provoked a reaction from the bosses. One of their reactions is to use the instrument of law, to criminalize workers’ leaders and bust the unions. This criminalization and union-busting tactics will increasingly become a norm in Indonesia and around the world, as the crisis in capitalism becomes deeper. Only solidarity and unity amongst the workers, accompanied with the courage and desire to fight back, can beat back the capitalists and their states.

As a result of this, we demand the following:

To help the comrades in their struggle, these are a few of things that readers can do:

In the end it is only through mass action we can beat the trap of this unjust bourgeois law. Mass action is the main weapon of the workers. Fellow workers, continue to build for yourselves a strong organization! Continue to educate yourselves in revolutionary politics!

If workers are organized but not educated politically, they will fall under the sway of conservative and reactionary prejudices. But if educated but not organized workers will be divided, weak and be nothing but raw material for exploitation. Only workers who are organized and educated can free themselves and all of the oppressed peoples from the dead end of capitalism.