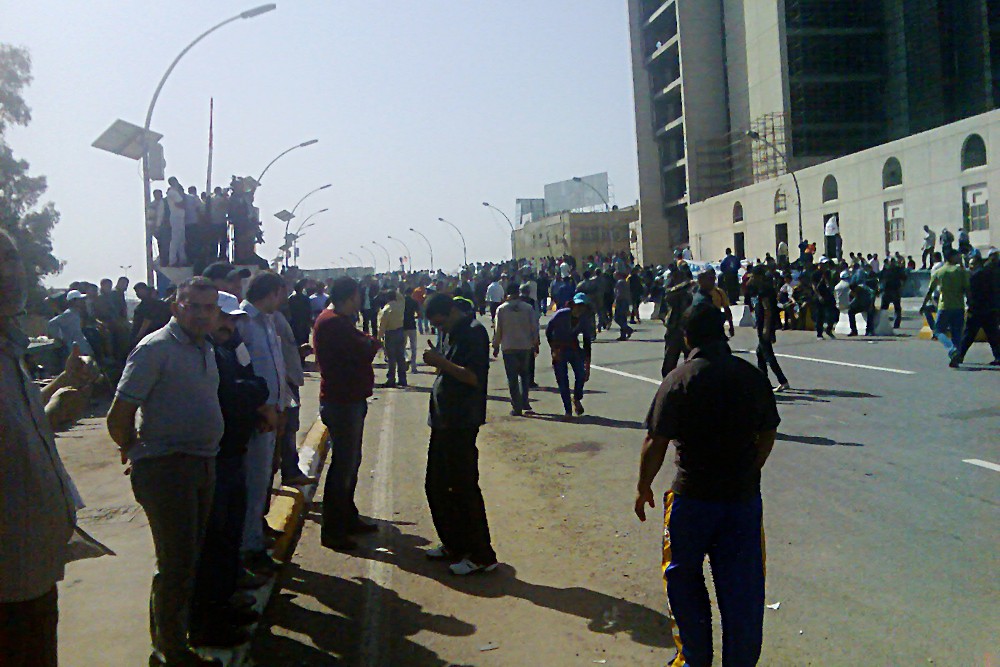 The wave of revolution that started in Tunisia is now also reaching Iraq, where the Kurdish areas had already flared up last week. But the protests are not limited to these areas. On Friday an anti-government rally named the Day of Rage, was organised in Baghdad and other cities with thousands taking part.

This comes after several weeks of protests around the country against corruption, the shortages of jobs, food, power and water, the high level of unemployment, bad healthcare, bad schooling and a general decline in all services.

At least nine people were killed and 49 wounded in clashes with security forces in several towns across the country when demonstrators tried to storm government buildings and security personnel fired shots into the crowds to try to disperse them. Groups of protesters were shouting “No to unemployment,” and “No to the liar al-Maliki”.

In Baghdad, there were violent clashes between protesters and police. According to the BBC: “Baghdad has been virtually locked down, with the authorities banning traffic in the city centre and deploying several thousand soldiers on the streets.” All the roads leading into Baghdad were blocked off by soldiers in an attempt to thwart people’s attempts to protest. In spite of this, the protest went ahead and there were clashes with the riot police.

From Mosul in the north to Basra in the south there were other such protests. In the northern city of Hawija, security forces first fired into the air as a warning against protesters trying to take over a government building. Later the guns were turned on the people and three were killed and 15 others wounded. In Mosul, large numbers of protesters rallied in front of the provincial council building. Guards opened fire, and two protesters were killed.

In Basra about 4,000 people gathered in front of the Governor’s office demanding his resignation, because he has done nothing to improve city services. Such was the power of the protest movement that the governor actually resigned. Meanwhile, around one thousand demonstrators clashed with police in Fallujah.

Prime Minister al-Maliki had earlier urged people not to take part in the protests. He explained this was for “security reasons”. In an attempt to scare people away he said the protests had been organised by al-Qaeda insurgents and Saddam Hussein loyalists. Funnily enough this is more or less the line of Gaddafi in Libya, who says al-Qaeda is behind the revolt that is close to overthrowing him.

Again, copying what we have seen in other Arab countries, al-Maliki in a televised appeal on Thursday, pledged that 70 per cent of Iraq’s budget would be allocated to services. “Your demands have made an impact on the budget,” he said. Why he hadn’t thought of this before the protests erupted he didn’t explain. His promises are empty words, just as those of Ben Ali’s and Mubarak’s were empty words.

And what of the Islamists? Grand Ayatollah Ali al-Sistani and the powerful Shia cleric Muqtada al-Sadr called on people to stay away from the streets and not take part in the protests. Al-Sadr, who was considered as an “extremist” in the past promised to hold demonstrations… in six months’ time… if services do not improve.

The fact that al-Sadr made this call just after returning from Iran, is a clear indication that while the Iranian regime has been mouthing support for the revolutions in Egypt and Tunisia – although they have presented the revolutions as “Islamic” – when it comes to revolution on its doorstep involving Shia Iraqis it is a completely different matter. They fear it could help to fuel the already growing opposition of the masses in Iran. How long al-Sadr will be able to use his position to hold back the Iraqi masses is another question.

IWPR reported one Baghdad resident as saying, “There are people who are too desperate not to protest. They have nothing else to do but demonstrate. Some of them hold degrees, but they can’t find good jobs. They can hardly make ends meet. We were in war under the former regime, and now corruption is ruining us. Where is all of our money? Where are our resources?”

What is fuelling the protests in Iraq are the same issues that have been at the root of revolution all across the Arab world, lack of jobs, bad housing, bad social services, corruption, etc. In particular electricity and water are both in short supply in Baghdad.

According to Reuters, one man who had walked miles to get to the rally in Baghdad said, "People are hungry. We ask the government to find job opportunities for the young. All my sons are unemployed, I'm here to express the injustice that we live in."

For now the media has been consoling itself with the fact that the people are only calling for “reform” and not revolution. The problem is that reform is not possible. Those in power are a rotten, corrupt clique who owe their positions to the US-led invasion. Their job is to defend capitalism, not to serve the interests of the Iraqi people. The passage from attempts to reform to the call for revolution is a very short one, especially when people are being killed on the streets, not by al-Qaeda terrorists, but by the state security forces that are supposed to defend them.

Embarrassment of US imperialism 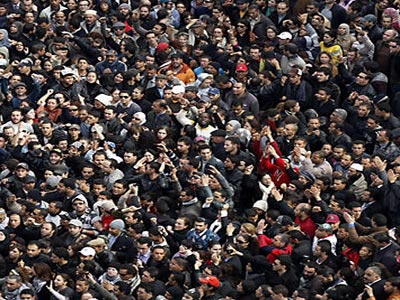 February 25, Basra. The US administration under Bush claimed that they invaded Iraq to create a western-style democracy. They overthrew Saddam Hussein at an enormous cost to the Iraqi people in terms of lives lost and infrastructure destroyed.

At the time we explained that the task of overthrowing Saddam Hussein belonged to the Iraqi people and to no-one else. We were told that the poor Iraqi people were not up to the task. What a lie! The people of Tunisia and Egypt have shown that any despot can be overthrown once the masses move decisively. Who can doubt that had the US not invaded Iraq, today Saddam Hussein would have been overthrown by his own people, as part of the Arab revolution?

What is most ironic about the situation now is that it is the very regime put in place on the back of the US-led invasion force that is facing mass protests. Surely Iraq should be immune from such protests. After all the people there have a “democratic” government.

The movement of the Iraqi people today proves that the revolutions that have broken out go beyond the aim of removing despots. The Iraqi government is formally speaking a democratic one. And yet the people are not content. Social and economic conditions have actually deteriorated since the fall of Saddam. And now we see it in the demands that the Iraqi working people are putting forward.

This must be very embarrassing for the US government. How are they going to explain all this to their own people? Is this what over 3000 US soldiers died for, to see corrupt politicians being put in place in Iraq? Already the mood in the US among ordinary working people had turned against the war in Iraq. Now people will be enraged.

Sooner or later, the Iraqi people will join their brothers and sisters in the other Arab countries. Once they do it will give an even more powerful impetus to the revolutionary movement sweeping across the region. We salute the Iraqi people who are beginning to stand up after having suffered so terribly, first at the hands of Saddam Hussein and then under the jackboot of imperialism.